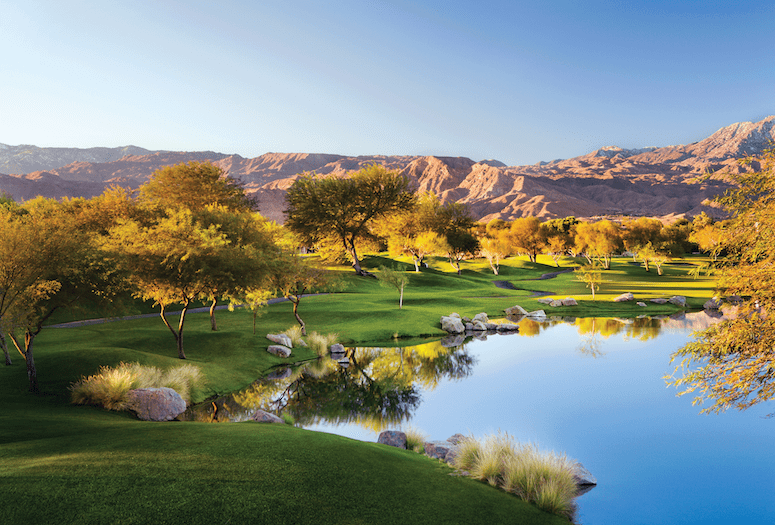 Out of the Shadows

The “Black Knight” has created but one California course, and the  Gary Player Course at Westin Mission Hills Rancho Mirage is a beauty. Water features define much of the routing, while mounded  greenside surrounds make for a focus on strong wedge play. Hot Tip: Low-cut fringes give options for all sorts of chipping; make use of the design element at Westin Mission Hills.
westinmissionhills.com

Often referred to as “beast” to the “beauty” of its sister Celebrity Course, the Players Course at Indian Wells Golf Resort is aptly named. Tipping at nearly 7,400 yards, the John Fought design is revered for its deep, distinct, and artfully crafted bunkering.  Hot Tip: The opening hole par-5 is a monster; don’t be psyched out by the tough start.
indianwellsgolfresort.com

The manicured, desert-style routing at Firecliff Course at Desert Willow Golf Resort pairs native surrounds with a round of ongoing intimidation. While fairways prove getable for all player levels, the more distance one bites off results in enhanced forced carries from the tee box. Hot Tip: Keeping the focus in-play proves crucial, lest one gets lost in the stimuli of desert-scaping.
desertwillow.com

The Pete Dye-designed Stadium Course at PGA West annually plays host to the world’s best as one of three courses in rotation on the PGA Tour’s The American Express (formerly the Desert Classic). Famed for its par-3 island green known as “Alcatraz,” the rest of the layout can also jail the lowest of handicaps. Hot Tip: To conquer, players need be ready for succinct ball-striking — both above and beneath one’s spikes. pgawest.com

For a proper post-round segue that’s not too far from the green, stop at these hot spots to complete an entire weekend of golf-related fun.

Following a round at the Eagle Falls Golf Course, stroll over to Fantasy Springs Resort Casino in Indio for a full spread of machine and table games, along with the desert’s only off-track betting room for railbirds. fantasyspringsresort.com

Need to be outfitted for play or just want to upgrade your gear? Pete Carlson’s Golf & Tennis in Palm Desert has been a local staple since 1981. Top name brands for gear, apparel, and footwear are all in play.
petecarlsonsgolf.com

After taking on one of five public courses at PGA West and La Quinta Resort and Club, assuage the pain of those bogeys with the sports massage at Spa La Quinta. It’s customized to a player’s athletic goals.
laquintaresort.com

Vue Grille & Bar at Indian Wells Golf Resort reopened this fall after a $1 million renovation. The new, rectangular-shaped watering hole now seats inside and out, and boasts fresh specials throughout the week, starting with half-priced wines on Mondays and a daily happy hour. indianwellsgolfresort.com

• READ NEXT: What is the Toughest Hole in the Desert? Find Out.