City of Coachella: What You Need to Know About Its Transformation 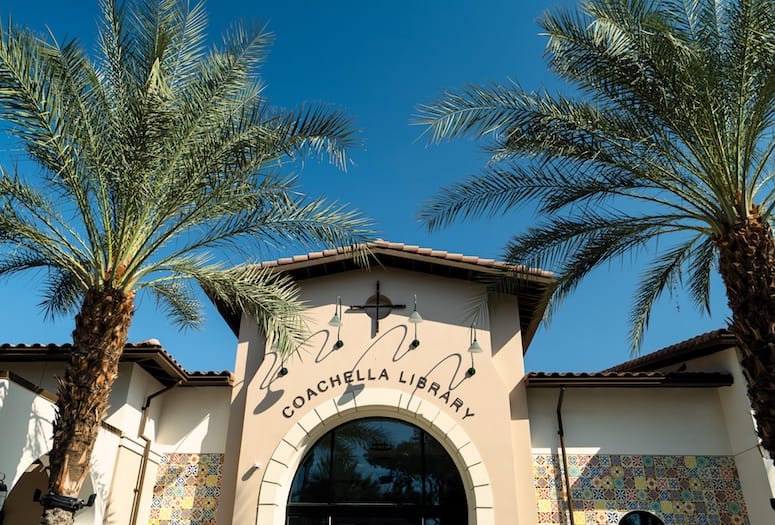 The new 15,000-square-foot Coachella library and conference center will include a 34,000-square-foot park, outdoor reading space, green screens, and a café, all to open this fall.
PHOTOGRAPHS BY GREG PETERSON

Thanks to the continuing success of the Coachella Valley Music and Arts Festival, now in its 19th year, the city of Coachella is well on its way to having the most recognized name of any city in the valley.

City officials, meanwhile, are doing everything they can to make sure developers and entrepreneurs know that Coachella also has more affordable, yet-to-be-developed land than any other city, not only in the Coachella Valley but in most of Southern California.

“We are in a very unique position right now,” says Coachella Mayor Steven Hernandez. “Developers and entrepreneurs are fascinated with the Coachella name because of the annual Coachella Valley Music and Arts Festival, Stagecoach, and the many other events that take place here. But when they find out that we still have hundreds of acres of some of the most affordable and easy-to-develop land in Southern California, they become even more intrigued. They’re talking to us about new business opportunities involving everything from hotels and restaurants to cannabis cultivation facilities. They’re obtaining the necessary entitlements and permits, and they’re moving forward with these projects.”

• See related story: What You Should Know About Indio.

Stuart Rubin, co-owner of Glenroy Coachella, LLC, which is building Coachella’s first hotel, a 250-suite luxury resort called the Hotel Indigo Coachella, says, “Coachella is a prime location for a hotel not only because of the popular music festivals that are held every year at the neighboring Empire Polo Club in Indio, but because of the famous golf and tennis tournaments that bring thousands of visitors into the valley each year.”

“Demand for luxury hotel accommodations in Coachella is also being fueled,” adds Rubin, by special events that take place at the HITS Desert Horse Park in Thermal as well as The Thermal Club, a private motorsports racing club that opened in 2012 that is considered to be one of the finest private racing facilities in the world.

Glenroy Coachella is responding to market demand by building a luxury resort on a 35-acre site next to Rancho Las Flores Park that will be managed by the UK-based InterContinental Hotel Group.

The one-story hotel, which will have a soft opening in phases beginning in the fourth quarter of this year, has a unique design with room configurations in two-, four-, and six-bedroom villa-style arrangements. Each unit has almost 1,000 square feet of shared living and dining space, including a full-size kitchen with high-end appliances. 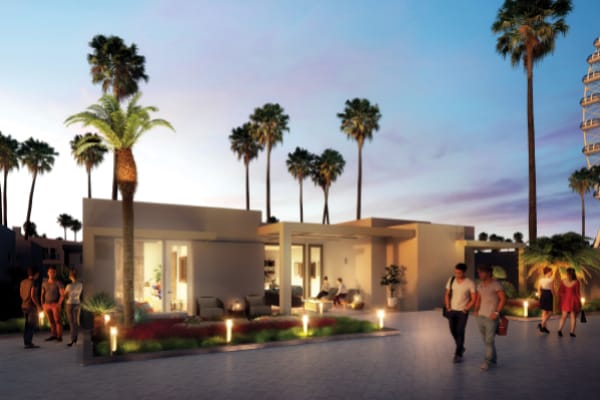 The new Hotel Indigo Coachella will be located on a 35-acre site next to Rancho Las Flores Park and will include 250 suites, shared living and dining space, and a 10,000-square-foot saltwater pool as a focal point of the resort. 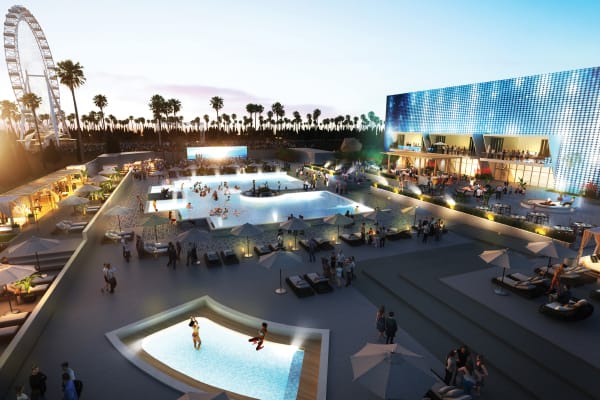 • See related story: What You Should Know About Cathedral City.

The focal point of the resort will be a 10,000-square-foot saltwater swimming pool that features a catwalk for fashion shows as well as a DJ booth for pool parties and other special events. The pool also comes equipped with a cooling system to keep the water comfortably chilled on the hottest days.

“We have one of the most spectacular pools you’ve ever seen,” Rubin says, adding that the pool was specifically designed to be only 4 feet deep so that it can accommodate families.

Other resort amenities include a gym and yoga studio as well as a two-story restaurant that can be used for corporate meetings, weddings, or as a club for entertainment. The restaurant will be able to accommodate nearly 250 guests, both inside and outside, and will feature farm-to-table menu items as well as organically grown, locally sourced coffee. There will be an additional pool, bar, and grill with light fare that seats 150 people.

Meanwhile, Self Reliance Inc. is scheduled to break ground on the first phase of a 188-site high-end RV resort in Coachella called Coachella Vineyards Luxury RV Park. The park, which will provide RV sites for sale and for rent, is located on a 46-acre site near the northeast corner of Tyler Street and Vista del Norte.

“It will be very high end,” says Patty Nugent, a manager for the resort, whose first RV sites will be available in early 2019. “It will have a huge clubhouse and an outside amphitheater, like a mini Hollywood Bowl.”

• See related story: What You Should Know About Palm Desert.

Self Reliance hopes to eventually build a luxury hotel on its property, although the company has not yet secured a commitment from a hotel operator, Nugent says. One hundred townhomes are also in the planning stages, she added.

Other companies that are working to entice hotel operators to Coachella include Oasis 25 Partners, LLC, which is marketing a fully entitled 5.45-acre site on the northeast corner of Vista del Norte and Dillon Road, near Interstate 10.

“The market is ripe for [hotel development],” says Robert Mendoza, project manager for Oasis 25 Partners. “Everyone is talking about the Coachella festivals, the cannabis tourism, the golf courses.”

The city of Coachella has approved nearly 3 million square feet of commercial cannabis cultivation facilities, the first of which are expected to open later this year. “We have the largest grouping of cannabis cultivation industrial parks that are entitled in California,” said Luis Lopez, Coachella’s development services director.

“We operate in downtown L.A.,” Barry says. “You can’t get a 60,000-square-foot building in L.A., let alone four or five stacked next to each other. In the desert, you have the freedom to build big and lease it out at a reasonable rate.”

“We have been approached by some of the biggest growers in the country,” Barry says. “You look at Coachella. It has this incredibly attractive name attached to it that people recognize worldwide. Coachella has some incredible potential. All the hard work is over. Now it’s a matter of getting tenants and building, and we’re building.”

Ed Sapigao, CEO of Irvine-based Kismet Organic Inc., is planning to build 77,400 square feet of commercial cannabis facilities in Coachella. “What makes Coachella unique,” he says, “is the cooperation from the local government.”

• See related Story: What You Need to Know About Palm Springs.

Mayor Hernandez says the city’s efforts to encourage the growth of the local tourism and commercial cannabis industries will not only create hundreds of new jobs but also help to diversify Coachella’s economic base. And as the city’s economy continues to grow and diversify, more revenue will become available to further modernize the city.

Hernandez and his colleagues on the City Council have already moved aggressively to update Coachella’s historic Pueblo Viejo district downtown with a new 15,000-square-foot library and conference center that were expected to open this fall.

The library and conference center will include a 34,000-square-foot park with a landscaped paseo, outdoor reading spaces, meeting breakout patios, green screens, and beautiful landscaped areas. It will also include a café that serves sandwiches, pastries, and coffee and provides its patrons with free Wi-Fi service.

The new library and conference center are already helping Coachella to entice new businesses that will appeal to local residents and tourists alike.

Coachella’s downtown area will also
benefit from completion of a 30,000-square-foot, one-story building on Cesar Chavez and Sixth streets, which will serve as a regional office for 200 employees of the Riverside County Department of Public Social Services (DPSS).

When the county opens the regional office, likely during the third quarter of 2019, it will provide a steady flow of traffic for restaurants and retail establishments during the day and increase the potential for new business opportunities in downtown Coachella.

“The city of Coachella is transforming before our eyes,” Hernandez says.