Indio Has Made Great Strides Over the Past Decade 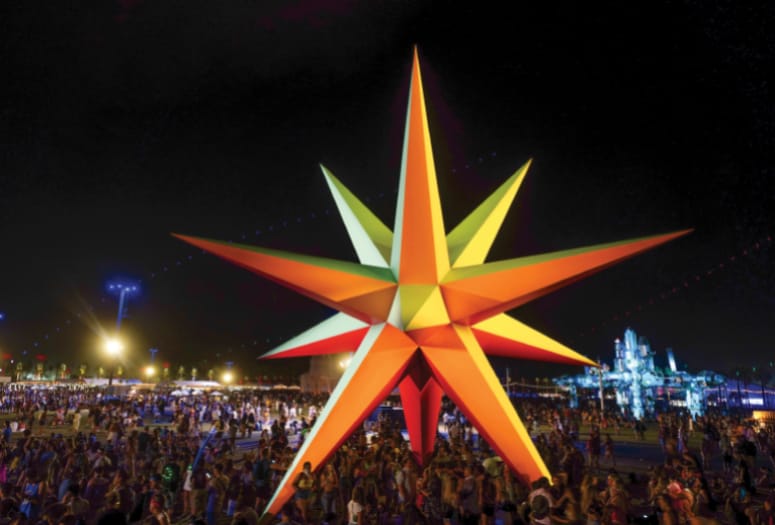 The Supernova sculpture by Miami-based artists Roberto Behar and Rosario Marquardt displayed at the 2018 Coachella Valley Music and Arts Festival, which is held annually at the Empire Polo Club in Indio.
PHOTOGRAPHS BY CHRIS MILLER/ IMAGINE IMAGERY

Ten years is often a defining point in any long-term plan. And if you look at the city of Indio, the past 10 years have seen the Coachella Valley’s oldest city raise itself up from the depths of recession to being hailed as the No. 2 Top Emerging Travel Destination in the U.S. by Trivago in 2017 and one of the Top 20 Best Cities for Young Families in California by nerdwallet.com in 2017 for its “unparalleled quality of living.”

“There is a lot going on right now,” said Mayor Mike Wilson recently, with a great deal of pride. “We are at the forefront of a renaissance, and there is a lot of exciting stuff happening in the city.”

Wilson noted that along with a growth spurt in terms of residents who require more housing within the city limits, the city’s north side is bursting with activity and new businesses, including a Fairfield Inn & Suites by Marriott, a Hampton Inn by Hilton, and a Golden Corral buffet restaurant that were prompted by the yearly influx of concert-goers for the Coachella Valley Music and Arts Festival and Stagecoach California’s Country Music Festival, which are held over three weekends in April at the Empire Polo Club, and a host of other events that are held in and around the City of Festivals.

For Mark Scott, who took office as City Manager in 2017, it’s an exciting time to be part of the city’s staff. “I came into a situation with a staff and an established City Council who all work well together, who are all smart people that share the same goals,” he says.

With budget workshops twice a year, Scott keeps the city’s budget on a white board to keep costs and appropriations at top of mind for him and his staff. Pointing out the Highway 111 corridor project, he says, “it’s scheduled for completion in November and it’s on schedule,” he says of the $10 million infrastructure improvement that includes median islands and public art pieces.

“We are  at the forefront of a Renaissance, and there  is a lot of exciting  stuff happening  in the city.”

The heart of Indio’s business district has always been the small, independent businesses. To give a hand to the businesses along the improved Highway 111 corridor and historic Indio Boulevard, Scott says “the city wants to offer façade and signage grants to give businesses the incentive to modernize.”

Just as important are the partnerships that Indio has built over the past 10 years that have helped revitalize the city center, like College of the Desert, which is already working on a second building, and Loma Linda University Children’s Health Center that opened in 2017 and is rumored to be the building block for an LLU Hospital in the city. “They’re both big players in changing the city’s downtown area,” he says. 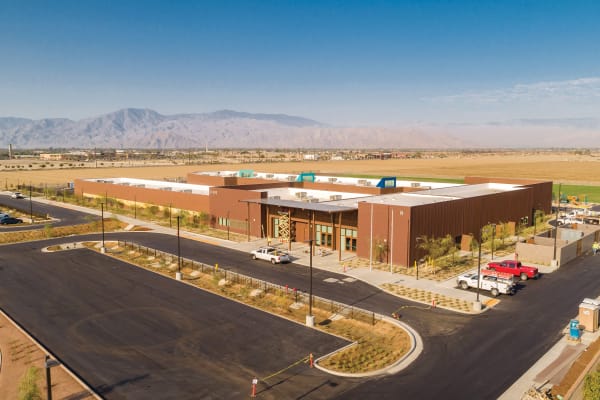 To plan for a growing and cohesive downtown, the city has sent out a Request for Qualifications for a Master Development that will help shape a master plan for the city. “We can’t do this one piece at a time,” Scott says of the future of Indio’s city center. “This is the valley’s fastest-growing city, and it is critical to our development that we have a master plan to work from.”

While the city has lost big-box stores with the closures of Super Target, Kmart, and Toys “R” Us over the past two years, both Scott and Wilson say there are already plans to have those spaces filled. “There are several possible tenants interested in the Super Target building, El Super grocery store is opening soon at the Kmart location, and Burlington has already signed a lease to occupy the Toys “R” Us site,” Scott says.

That includes a Golden Corral buffet restaurant. “It will be the first in the valley,” says Scott.

One of the largest new projects that Scott is excited about is the Maya Cinemas multiplex theater. Moctesuma Esparza, CEO for Maya Cinemas, is well-known for not only building and operating theaters in Central Valley cities such as Fresno, Delano, Salinas, and Bakersfield, but also for helping young people in their filmmaking efforts. “The theaters are beautiful, and they’re going to be a real asset for the city,” Scott says.

Another asset for the city is the Indio Police Department, which has been under the command of Chief Mike Washburn for the past two years. According to the chief, several of his personal goals — from more community-based policing to a new building that would house all of his officers and support staff — have begun to take shape over the past year.

The city has set a budget for the police facility and is now working on the design of the building, Washburn says. Seven new sworn officers have been added to the ranks to include new middle-management positions, which in the long run means a more efficient and effective department.

Washburn created the Chief’s Advisory Council, which consists of business owners and residents, that has strengthened ties in the community. “Some of our greatest insights on what’s going on in the city come from our business owners and residents,” he explains. “It is a richly diverse group that includes the former L.A. County Crime Lab Director, a member of the 29 Palms Band of Mission Indians, members of our faith-based community, and a retired school district employee.” 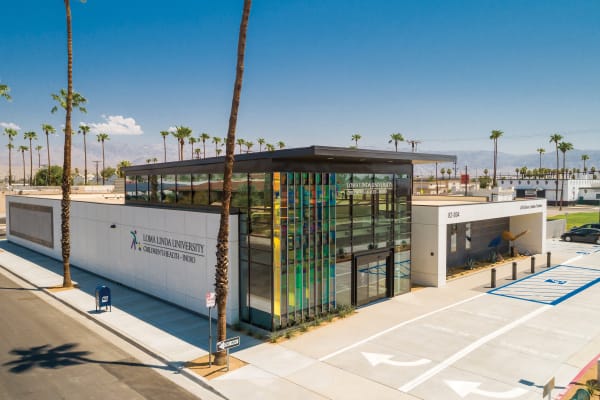 The Loma Linda University Children’s Health Center opened in the city’s center in 2018 and is already changing downtown’s energy, with a rumored LLU Hospital in the works.

Getting out in the community has meant joining residents of the John Nobles Ranch neighborhood and other older neighborhoods in weekend clean-up projects. “It shows the residents that we’re interested in really getting to know what’s going on and investing some sweat equity into the neighborhoods, not just policing the area,” he says.

Mayor Michael Wilson has served on the City Council since 1995 and has worked to see the city come through the recession and back to a robust economy that is fueled by thoughtful progress.

The city, he says, recently adopted the largest budget in its history at $173 million, with $90 million in the General Fund and $12 million slated for local street repairs and upgrades. “That’s more money than we’ve spent in the past 10 years,” Wilson says, with the funds already on hand, some from the Measure X sales tax increase.

“We’ve had the county offices here for so long we’re happy to have the new [John Benoit] Detention Center and the 400 jobs it brings with it,” he adds. As the second seat for Riverside County, Indio’s downtown also includes the Larson Justice Center and Riverside County Law Library. “The county has always been a great partner for Indio,” Wilson says. And the activity and personnel that staff the county facilities “all support our local businesses,” he added.

One of the biggest pluses for the city is the recent purchase of the Indio Fashion Mall by Alex Haagen, who owns the Empire Polo Club that hosts the Coachella and Stagecoach festivals, along with a full polo season and numerous corporate and community events on the grounds. The Haagen family has a long history of building successful shopping malls throughout Southern California. 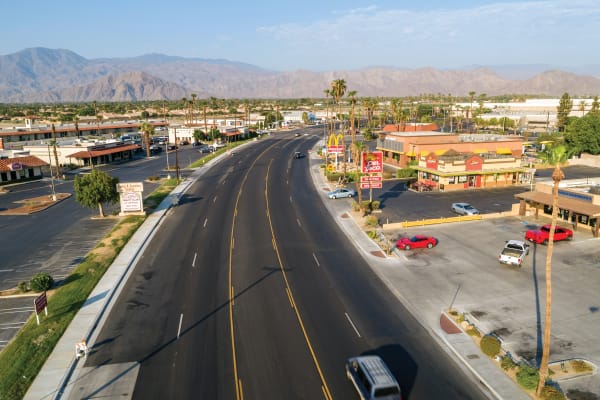 The Highway 111 corridor project, scheduled for completion in November 2018, includes $10 million in infrastructure improvements such as median islands and public art pieces.

About 20 years ago we talked to Mr. Haagen about purchasing the mall but that fell through,â€ Wilson says. Over the past two decades the mall has had absentee owners who were more interested in pulling money out of the property than developing it to its best possible use.

Haagen's purchase includes developing a 20-plus-acre parcel behind the mall. The concept that the city and Haagen are working toward is an open, mixed-use entertainment and lifestyle center with buildings of varying heights, park-like walkways, and space for open-air events and residential units on the cityâ€™s back parcel.

Working with Haagen has a distinct advantage for the city, says Wilson and Scott. The developer has already given some long-overdue attention to the mall and is already looking for tenants for the project.

For Haagen, who along with his grown children owns homes in the city, the mall project is a natural fit. His vision for the space coincides with the city's as a place for families to shop, dine, and be entertained, complete with a space for a winter ice rink. His concept includes a hotel, amphitheater, and office space to complement the businesses and residents.