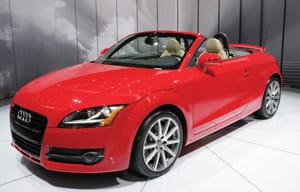 Right: The Audi R8 takes the automaker’s track success and puts it on the open road. If it looks a bit like a killer whale, expect similarly lethal performance — a top speed of more than 180 mph and a 0-to-60 mph time of around four seconds.

While a host of green-fuel vehicles made their debut at the 100th Los Angeles Auto Show, the dazzling white $350,000 Lamborghini Murciélago LP640 Roadster stole most of the attention.

Billed as the fastest open-topped car in the world, it has performance figures that better the regular closed-roof roadster version: 0 to 60 mph in 3.4 seconds and a top speed of 205 mph. Not that you can hit those highs with the canvas roof in place (it is recommended for use only at speeds below 100 mph).

Other than the collapsible roof, the V-12 LP640 Roadster can be identified by a number of other changes, including new wheels, interior — and a driver with very messy hair.

Perhaps you’d like something a little more subtle. You might not have the money to buy the whole of Aston Martin — parent company Ford would, however, be very interested to hear from you if you do — but you soon will be able to buy yourself the next best thing: a Roadster version of the gorgeous V-8.

The perfect open-topped, two-seater for cultured Californians who want a refined and responsive (but not too big) car, the V-8 Roadster — clearly this year’s must-have name for every carmaker’s open-topped offering — has all its hardtop brother’s allure and appeal, but none of its headroom restrictions. The automatic roof can be flipped up or down in just 18 seconds — and while traveling at speeds up to 30 mph. Expect to see it in showrooms by summer. Also expect a line of potential customers out the door of those showrooms.

The L.A. show wasn’t the first time the world had seen the   R8 mid-engine V-8 supercar, but that didn’t stop it from being one of the centers of attention. Designed to add sparkle to the top of the German brand’s range, the R8 takes all the years of Audi’s success on the track and puts it on the road.

It looks a bit like a squashed killer whale and has similarly lethal performance. Expect a top speed of more than 180 mph and a 0-to-60 mph time of around four seconds. But what’s really new is how practical the R8 will be. Where it’s difficult to pack more than your credit card in most cars in this segment, the four-wheel drive R8 offers oodles of space — enough to get two golf bags in the back, making it the first practical supercar.

Well, maybe the second. The Porsche 911 is the original everyday supercar, and it still makes a very good case for itself as the company pours ever more variants of the evergreen, rear-engined 911 into its range. Los Angeles enjoyed the first U.S. sightings of the stripped-down GT RS, which promises the ultimate 911 experience, and the calmer but probably more usable 911 Targa 4S. With its all-glass roof, you get the best of both worlds: hardtop comfort with convertible levels of light — great for the sun-shy sports car driver who doesn’t like being cooped up in a coupe.

Other new supercars drawing crowds at the Staples Center included the Ferrari 599 GTB, which just might be the best Ferrari ever made, and the ridiculously overpowered 1,001 bhp Bugatti Veyron. You have to respect a car — any car — that is such a Titanic feat of engineering. But for most of us, that’s all we’ll be able to do. Costing seven figures (and the first number is very close to not being a one), it is a rare pleasure that few people will ever experience.

Far more accessible — and surprisingly not that much slower than the Bugatti — is the homegrown Callaway C16. A heavily reworked and cleverly restyled Chevrolet Corvette, the C16 offers chest-compressing acceleration, eye-popping brakes, and fabulous exclusivity for just $119,865.
No auto show would be complete without a few concept cars, and Los Angeles was no exception. Near the front of the “might make it into production” line was the BMW 7 Series Hydrogen, whose name gives away its special abilities. It has two tanks: one for regular gas and another for hydrogen. It runs equally smoothly on either fuel, but the real difference is in the emissions. When running on hydrogen, it produces no emissions other than water.

The thoughtful Mazda Nagare will never make it into production, but nonetheless showed that the Japanese company has some talented designers in its stable. It was followed by several concepts that were so outrageously ugly it made you wonder if someone had made a mistake and brought the wrong vehicles. No names here; but if you see a weird-looking Acura or Hyundai on the road in the next few years, you’ll know where it started.