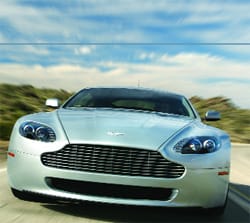 With that kind of parentage, it’s fair to say that the V8 Vantage uses the wings on its logo to get off to a flying start with pretty much everyone other than environmentalists. And chances are even a few of them are staring intently at their Birkenstocks trying to think of a way to get one into their garage.

Let’s start with the car’s divine looks. A blend of muscular aggression, refinement, and purpose, the Vantage’s style jabs you in the face and demands your full attention. It’s got all the flowing Aston Martin familial cues, but its shorter stature and reduced length concentrate the energy into a smaller space, intensifying its expression of a highly evolved sports car. If you like the way the Vanquish and DB9 bigger brothers make their presence felt on the road, get ready to love the Vantage.

The car warrants your affection for performance and handling — and a big chunk for its sound. It doesn’t really matter whether you are inside driving or outside looking on; the Vantage produces the most perfect V-8 exhaust note known to man. An engineer at the U.K. manufacturing plant in Gaydon must have been an organ tuner in a previous life, as the sound the cars make is bordering on the religious. Hear it once and you’ll be praying for another blast.

The handling is similarly addictive. Being shorter and more than 440 pounds lighter than the DB9, the Vantage gets down the road with speed similar to its bigger, more powerful brother. But it handles significantly better. You’d think the shorter wheelbase would make the Vantage more skittish than the DB9, but that’s not the case. It actually feels more securely tied down and needs fewer corrective inputs to the wheel than either the DB9 or the Vanquish, particularly on broken and uneven surfaces.

There are a number of reasons for this. The first is that the double-wishbone suspension has been given a far more sport-oriented tune than the DB9’s chassis.

The second is that, because the V-8 is extremely compact, the weight is optimally distributed and the car is subsequently better balanced. And the third is the significantly lighter weight, which removes the need for the DB9’s speed-sensitive and response-sapping power steering.

Collectively, by not giving you any cause to shut off the ignition for anything other than legal reasons, these details allow you to hear the gorgeous engine louder for longer, which, as already mentioned, is a very good thing.

Outright performance figures are a maximum speed of 175 mph and a 0-to-60 mph time of 4.8 seconds. But they fail to convey the true, bipolar speed of the beast. Up to 4,000 rpm, you are at the helm of a refined GT car. But squeeze the throttle just a little further and a small nuclear explosion occurs under the hood. The engine note goes from a grumble to a howl, your head is pinned to the headrest, and the world ahead of you turns blurry at the edges.

It’s very fitting behavior for a sports car and absolutely addictive when it’s wrapped in a body that looks as good as this, inside and out. The cabin might look a little spare on details in pictures; but when you are behind the wheel, it gels into a near-perfect blend of comfort and ergonomics. It’s also got that inimitably delicious smell of British leather that you just can’t get anywhere else.

Most products remain just products. A few transcend their genre and rise to become household names and cultish objects. The Aston Martin Vantage is one of those rarities that stand above the crowd. It doesn’t demand accolades, but effortlessly attracts them through being so appealing. And that’s cool.