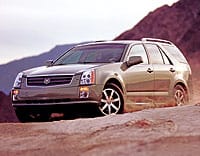 As the world changes, so does our concept of luxury. And so do the icons we choose to express it. This is especially apparent in the automotive industry. And to no company in the late 1990s was this fact more painfully obvious than to Cadillac.

For decades the darling of the rich and famous, Cadillac, the definitive U.S. luxury auto brand — the creator of near-fantasy cars with wings so big you had to have a pilot’s license to drive them — had turned into an also-ran producer of stodgy, unexceptional motorized furniture.

Sure, they had great engines and powertrains. They were alive with fascinating and valuable new technology and were definitively comfortable. But they looked dull. And, as occasionally boring as any decade can be, that wasn’t what many people wanted to say about themselves, then or now.

It didn’t take a visionary to see that something had to be done if Caddy wasn’t to be buried with its aging owners. Equally, it wasn’t the work of a rocket scientist to realize that the times Cadillac was most successful were those when it was most daring in design.

So, using the 1959 Eldorado — with 4-foot-high tail fins as a starting point and drawing on inspirations as diverse as the Stealth fighter plane and Bang & Olufsen audio equipment — the design team came up with a new direction they called “art and science.”

The most resolute depiction of this new direction is Cadillac’s stunning XLR roadster. Boldly modern, stylish, and confident, this car challenges your senses and demands your attention like a Cadillac should. Its knife-edge styling slashes a space for itself among the smooth curves of the competition and shreds preconceptions of what the brand stands for.

And that’s with the top up. With the metal lid down — a 30-second, push-button process — and tucked away in the trunk, the skyward-jutting windshield exaggerates the XLR’s extreme angularity.

The interior is as beautifully simple and uncluttered as the exterior. Trimmed in eucalyptus wood and textured aluminum, the cabin understates its many talents — most of which the driver controls via central LCD panel. This screen, controlled by touch or voice, tells everything — from where you are to how much air is in the tires.

Nothing as archaic as a key is required to start the engine. As long as the Bulgari key fob is in your pocket, you need only press a dash-mounted button for the 4.6-liter 320 bhp Northstar V8 to growl into life. No need to swap your gaze from road to dial to check the XLR’s speed; the numbers appear in thin air right in front of you via a jet-fighter-inspired head-up display.

Impressive as the design is, it would be of little value if the car didn’t handle as sharply as it looks. Cut the roof off some cars and they handle like a shopping cart, but not the XLR. It shares the “performance-car architecture” chassis of the upcoming C6 Corvette, which in everyday terms means it handles like a sports car should: fast.

The extensive use of aluminum and plastic in the car’s structure minimizes the XLR’s weight, giving it more than enough speed to keep you endlessly entertained. If you must have more power, a 400 bhp+ V-Spec version of the XLR will come later.

Meanwhile, if you want more space in a similarly angular package, the new Cadillac SRX is ready to serve. The company calls it a Performance Utility Vehicle, but that’s lifestyle marketing speak. You will be better served thinking of it as the sporty wagon version of the CTS sedan that sits somewhere between the XLR and the Escalade and competes with the BMW X5.

It uses the same 320 bhp Northstar V8 powertrain as the XLR — but can also be had with a 260 bhp V6 — tuned to give the same power but a tad more torque. And it can be thrown around with a surprising amount of abandon, certainly more than you’d expect from anything that carries up to seven adults.

It shares a few other features with its slick roadster cousin, including the do-everything touch screen, but has plenty unique features, too — the UltraView Plus sunroof that almost turns the SRX into a wagon cabriolet, the three rows of seats with an electrically folding third row, the arcade-range of entertainment options, and that seven-second 0 to 60 mph performance. All-wheel drive is also an option.

As hybrids go, the SRX is one of the more convincing we have driven. If you have an occasional need to carry more than five people or loads of luggage but don’t want to sacrifice handling, performance, or luxury, this could be the vehicle for you. It has great ability on and off road and doesn’t make you pay a huge penalty at the pumps for enjoying both.

So, the XLR and SRX are everything modern luxury cars should be — distinctive, high-quality, high-performance vehicles. But, importantly, they are clearly Cadillacs, too, with the trademark world-beating engines and powertrains, fascinating and valuable new technology, and excellent comfort. And they look fabulous.