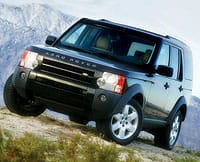 An old design maxim says that when something looks right, it is right. Having just stepped out of a Land Rover LR3 — after some physics-defying, off-road driving followed by a fast journey on pavement — I am hard pressed to think of a better example of that saying than this new car.

Combining slab-sided functionality with all the low-angled cool curves of an iPod, the LR3 looks as off-road ready as a Sherman Tank and as city chic as a pair of Gucci sunglasses. While pulling off such a design stunt is worthy of praise, and in itself will be enough for some people, it’s the LR3’s ability to act like a mountain goat one minute and a luxury sedan the next that impresses most.

The off-road ability perhaps should come as no surprise. This is a Land Rover — the original all-terrain, go-anywhere brand. It has mud in its genes. But what makes it so special is the almost absurd ease and comfort with which you can access the countryside, whatever the weather and almost irrespective of the gradients and terrain involved.

Two of the curses of off-road travel in Land Rovers past has been the confusing forest of levers and acronym-laden buttons — accompanied by a diagram that makes flying a plane look simple — and the rudimentary accommodations. Neither of these are a forced reality in the LR3.

There are still switches and knobs for the armchair adventurer, but their use is more optional than required. At the center of  them all is a new, large rotary switch that controls the Terrain Response System. This five-mode system allows you to preprogram the air-sprung chassis for the drive ahead.

All you do is match the pictogram on the dial with what you can see out of the window and stamp on the throttle.

The clever car takes care of the rest, setting suspension height, locking differentials, and administering and restricting power and braking force as suggested by the program written and honed by the Land Rover engineers. Having sampled the terrain, the system will even politely suggest a different mode via the central display if it thinks you’ve made the wrong choice.  Experience suggests you’d be a fool to argue with it.

So, with the chassis smoothing flat everything it encounters, you are left with plenty of time to sit back and enjoy the scenery in the remarkably spacious, hugely functional, and thoughtfully appointed cabin. Rather than being a surprise, this look was half expected, and not just because of the fabulous exterior design. The Land Rover Discovery, the LR3’s grandfather, had a cabin designed by interiors guru Terence Conran. And the big brother Range Rover has one of the finest interior designs of any vehicle in the world. So the stage was set for something inspired. The result is not disappointing.

From the Fisher-Price simple switches to the three rows of seats that have more than 30 combinations of people/luggage-carrying ability, the interior exudes intelligent product design. The linear dash is clutter-free — even the sat nav graphics, which include contours, are extremely neat and tidy — and the choice of materials works impeccably. There are easy-clean rubber sidings and mats, perforated leather for the seats, and durable plastics in the central control tower. It’s highly functional, but in a highly premium and desirable way — imagine if Apple made a car in conjunction with Leatherman and you will be almost there.

All of these facts might make the LR3 a great off-road vehicle, but they also make it an excellent road car — especially when combined with the all-new chassis and creamy smooth 300bhp V8. Where the Discovery could feel sloppy and imprecise on the road, almost like the wheel nuts were loose or one of the tires was flat, the LR3 carves a true, unruffled path along the blacktop.

It’s also noticeably quieter, with none of its forebears’ rattles, groans, and wind noise — which makes it far more relaxing to drive and the sound from the punchy and sensitive Harmon Kardon audio system that much clearer. A special mention must go to the speakers for this system. Rather than being hidden discreetly behind integrated grilles, as per normal auto interior design practice, these speakers look — and sound — like something you’d have in your house. The look wouldn’t work in any other car than the LR3, but here it works brilliantly.

I had my doubts that this normally aspirated unit (much like the V8 motor borrowed from sister company Jaguar) would have the required punch to heave LR3’s considerable bulk down the road at anything other than pedestrian speeds. But I needn’t have worried. There’s plenty of snap away from rest that, accompanied by an unexpectedly energetic NASCAR roar, turns into respectable acceleration if you allow the engine and six-speed auto box to show you what they can do. It’s no dragster, the LR3 — but it’s no slug either.

No, the LR3 is a true Land Rover for the 21st century. One that recognizes we are not prepared to compromise on-road manners and performance for off-road prowess. One that understands we want both fun and functionality in our SUVs. And one that, I predict, a lot of people are going to want, as there just isn’t another car like it. It’s unusual to find a product that is as mechanically functional as it is stylishly formed, but the LR3 is one of those rare beasts.

The Sport of Summer

Not fully content with launching just the LR3, Land Rover is gearing up for the summer release of the Range Rover Sport.

This BMW X5 competitor, which will slot into the Land Rover lineup between the LR3 and the Range Rover, features a 390hp supercharged engine and a performance-tuned chassis with dynamic-response suspension.

What this adds up to is the fastest, best-handling Range Rover ever made. But it doesn’t mean the car will desert its off-road roots. It will still be able to climb mountains and ford rivers with the best of them. The difference is that the Range Rover Sport will be more biased toward on-road rather than off-road driving.

Cosmetic changes for the Sport include a more steeply raked rear roofline and some aerodynamic side moldings, but it’s still clearly a Range Rover. Inside, the cockpit is more cocooning and the driving position more fittingly sporty than its bigger brother.

Think of it as a junior Range Rover and you won’t be too far out.