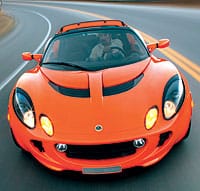 If you’re not in the market for a sports car, we recommend you don’t test drive the 2005 Lotus Elise — because, if you do, you instantly will be.

The reasons why start with its pure straight-line speed. Open the throttle wide and from a standstill the Elise (base price: $39,985) will whip past 60 mph in 4.7 seconds — supercar quick. A “fat” Ferrari 360 Modena only slightly beats that figure, tripping the lights at 4.3 seconds, despite having more than double the power of the Lotus at its disposal.

There’s plenty more. This isn’t a short-geared back-roads car that runs out of breath on the freeway. Find a road free of laws and limits and you can run through the little Lotus’ rifle-slick six-speed gearbox to nearly 150 mph.

As impressive as the speed is the way you can scythe the Elise through a series of corners in complete control, without losing speed, that impresses most and threatens to become a serious addiction. If you can imagine what a road-car-sized go-cart would be like, you’ll have a good idea of what it’s like to drive the Elise.

Maneuvers that you wouldn’t dream of trying in regular sports cars, unless you were on a track, become second nature in the mid-engined Lotus. That’s not saying it makes you drive unsafely; rather, it gives you such incredible control, you can explore its limits without risking life and license. Some race cars offer less precision than the Elise.

This is because of the Elise’s light weight and the aluminum chassis’ extraordinary stiffness. With the car not twisting and flexing as it rides over road irregularities, the surprisingly supple suspension keeps the tires stuck firmly to the road — and a smile on the driver’s face — so the car always goes where you want it to, however unreasonable that can sometimes feel.

Then there are the brakes. These are almost more impressive than the acceleration. There’s nothing fancy about the four-disc, ABS setup other than its ability to make it feel like you’ve opened a parachute behind the car whenever you stamp hard on the middle pedal.

None of the above would come as a surprise to any European. The Elise has been on sale there for several years. But what would make all of them take a second look is the engine. Gone is the 120 bhp Rover unit, replaced by a cleaner, more efficient 190 bhp Toyota unit borrowed from the GT-S Celica. Offering more than 50 percent more power than the British engine, the Japanese motor has the bonus of variable valve timing. Basically, this means the driver can choose the car’s character. If you want to just pootle around town or cruise on the freeway, the Elise, unlike many singular sports cars, will comply without a cough or splutter — and yield some remarkable economy figures. And when you want maximum adrenalin, it’s still right there for you. Spin the engine past 6,800 rpm and, as the exhaust note hardens and the tacho needle rushes for the rev limiter, despite your already healthy velocity, the car surges forward on an unexpected extra wave of power. It’s something you can’t help doing again and again — and again.

By contrast to the box of tricks in the engine department, if you start by expecting nothing from the cabin, the 2005 Elise will come as a pleasant surprise. Apart from the required dual airbags, there is air conditioning and even a CD player. The windows and hood are manually operated, and the one-piece seats can be adjusted only forward or backward, but the feeling created is one of sporty minimalism rather than spartan compromise. The pedals and gearshift knob are crafted out of aluminum, as are the dash and the beautifully functional switches. And there’s even some carpet in a couple of areas, which helps to make the environment fractionally more comfortable.

If that still sounds unappealing, you can specify the Touring Package. This option gives you full carpeting and sound insulation, electrically operated windows, and leather seats and trim. If you want to go even further, a hardtop is also available. But if you are going down this route, you might be missing the point of the Elise.

What you really should be doing is to go the other way and make your Elise one step closer to the track car it so deserves to be — by fitting the Sport Package. This features 10 percent stiffer, height-adjustable suspension and forged aluminum wheels shod with super-soft compound Yokohama tires that stick to the road like gum on your shoe.

Using the Elise as an everyday car is only realistic if you never carry anything other than a passenger and you like arriving at your destination half an hour before you should with your hair in a mess and with a huge grin on your face. So as regular transport for most people, it doesn’t cut it. But as an object of pure automotive ability, it has few, if any, equals. Think of it as the ultimate four-wheeled toy and you won’t be disappointed.