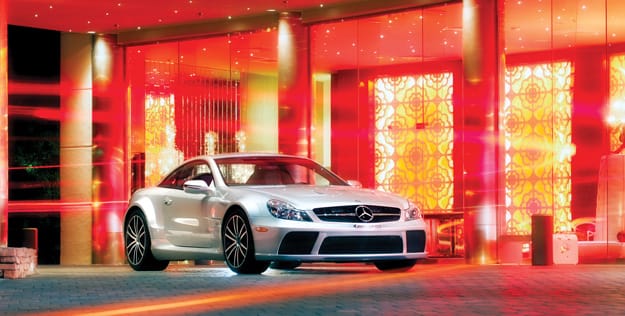 There’s little point in trying to explain the reason for the Mercedes-Benz AMG SL65 Black Series’ existence. One look at it shows you all you need to know. Its purpose: speed. Lots and lots of enormous, tire-smoking speed.

The third automotive missile launched from the product silo known as the company’s AMG Black Series division, the SL65BS is by far the fastest and most satanic product Mercedes-Benz has built to date — which says something, considering that the previous model was the extraordinary 190 mph CLK Black Series, which already pushed the boundaries of sense and excitement. The Black Series left little sign of its original SL65 AMG design. By the time technicians finished, it was easier to ask what they didn’t change rather than what they did. The key to explaining the deep surgery lies in the studio’s stated mission for all of its cars: two seats, closed roof, lightweight, and more power.

The “two seat” part was a cinch; the SL65 has never offered more than that. The closed roof was a challenge. Rather than adapt the folding-roof mechanism, designers replaced it with a solid, immovable carbon-fiber lid, helping the car reach its third goal of reducing weight by 550 pounds and ensuring that none of the extra power created by the vast engine is wasted on anything other than shooting the car forward.

Not that the car really needed any extra go. The “standard” bi-turbo six-liter V12 in the SL65 AMG already produces 612 horsepower and enough torque to uproot a mature forest. But more power it must have to meet the Black Series mantra, so the technicians dutifully bolted on a pair of 12 percent-larger turbos and the numbers have fired into orbit: 670 horsepower and a truly locomotive level of pulling power. They could have been even higher, but they had to be slightly detuned as they found the semi-automatic, multimode gearbox would explode if they didn’t.

Having thrown caution to the wind in the engine room, the technicians completely reworked the chassis for the SL65BS. The entire active air suspension system was junked in favor of a track-ready and very tunable coil-over-strut suspension. To make sure no one misses that all this work has been done, the car was outfitted in a new wide-lapel carbon-fiber suit — only the doors and rear wings remain from its predecessor — and fitted with wheels that bulge like oversized biceps from the extended wheel arches.

The interior appears more subdued. You might expect a car with the performance to embarrass a rocket to have the cockpit of a fighter jet, but there’s little difference between this space and the one in the regular SL65 AMG. (Not that you spend much time behind the wheel wondering about such things.) Once you’ve turned the key and hit the starter button, every sense in your body dials up to maximum to try and comprehend how fast this car can go.

Beyond that speed, things get weird. With barely a whisper from the engine up front — none of the CLK’s racer-like V8 growls here — the SL65BS catapults forward, the tires gripping on even a bone-dry street, to super-car speeds, like it’s getting a tow from a passing comet. It can reach 125 mph in about 12 seconds, the same amount of time it takes an average car to reach 70 mph, and then scorch forward until it hits a limiter at 200 mph.

This car travels faster than a bullet — and is similarly challenged by corners. For all the mass reduction, chassis reworking, and faster steering rack, the SL65BS is not at its best when trying to navigate a series of tight bends at speed. It’s lighter than ever, but it still tips the scales at more than 4,100 pounds. So when you try to alter its course significantly, you have to channel your inner racer to get it — and you — smoothly around the bend.

It’s most at home on fast, autobahn-like sweeping corners, where it feels solid and planted almost irrespective of the speed, which is to be expected, as the car was developed on Germany’s finest unrestricted roads and tracks. Many of the 350 cars scheduled for production will remain on these roads; about half will come to the United States. The SL65BS will remain a rare $320,000 pleasure for a select few.

There are faster and better-handling cars, but none offers the same brutal mix of speed and style. It needs no other reason to exist.