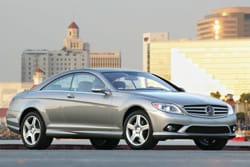 Slipping into the completely redesigned Mercedes-Benz CL550, you will see neither a slot for the ignition key nor a gearshift. In fact, the center console looks gelded, impotent. Does this grand new coupe with the baby-soft leather seats think itself into gear?

No, actually. Tucked behind the steering wheel is an implement from the past, a storied lever first gracing the transmission of opulent saloon cars of the 1930s: a column shift. With only four positions — drive, neutral, reverse, and park — the CL550 decides for itself when to shift. It has a mind of its own, and you need little less than a Rosetta stone to decipher the potpourri of onboard buttons that make this über appliance an extension of the self. The ignition turns out to be a half-dollar-sized silver button to the left of the steering column.

All about security, safety, value, and what might be called “communication utility” — and otherwise tough and timeless as rock ’n’ roll — the CL550 is the future of luxury. The 382-horsepower V-8 has — like all aspects of Stuttgart’s latest four-valve-per-cylinder cyborg — more computing power than all the Apollo capsules combined. Onboard radar allows the CL550 to largely maintain itself, unassisted, in traffic. Nevertheless, we worry about a coupe that is smarter than we are. Young industrial engineers could take a graduate course in this new reality: The Car as Consciousness 101. The thoughtful CL550 relieves the driver from much of the driving — Big Mother-style. Adroitly.

Unlike the BMW’s iDrive, it’s not necessary to click through feature menus. You have multiple-location access to radio volume and channel, route instruction, and telephone (which is to say, generally, you can control these features from either the hub of the steering wheel or the console).

The silent-as-a-pulse interior is upholstered with interactivity. You drive the CL550 less to engage it more. The sound system is more an audio library where you can identify and summon everything broadcast under the sun — the words “Howard Stern” spelled out on a screen in perfect, sudden sync with his affable blasphemies beamed by satellite from heaven’s cold cousin, outer space.

Distronics Plus will, by onboard radar, keep you at a measured distance from the car in front of you. It will accelerate to keep up with that car, decelerate when that car slows, and bring you to a stop, if need be. (However, it will not initiate motion from a stopped position.)

Remember the HAL 9000 computer in Stanley Kubrick’s epic 2001: A Space Odyssey? The CL550 has MOM — the Movement Operations Monitor. I was headed for the coast when MOM’s suggested freeway route became a 20-mile parking lot for house-high trucks. I detoured into Long Beach, and the monitor became irked, her gentle robot voice insisting, “Turn left in a quarter mile. Turn left in 300 feet. Turn left.” As the CL550 and I went up a winding, four-story parking structure, the audio sounded efficiently frantic, commanding, “Turn right. Turn right. Make a U-turn at the first opportunity. Turn right.” Another voice — from the radio — advised, over techno music, “Feel what you hear. And chill. Chill.”

There is method to this madness. More Mercedes vehicles sell in Palm Springs, Beverly Hills, Newport Beach, and San Diego than in France. Here in a Southern California realm of bumper-to-bumper traffic, this is the auto equivalent of the corner office. This is a car that relieves you of so many driving responsibilities that you could sit behind the wheel at 80 mph on the freeway and read Unsafe at Any Speed.

The new coupe design — the first in longer than a decade — sports hips, the body gracefully extruded above the wheel wells to award its no-nonsense silhouette sensuousness.

The CL550 is the first and most conservative of four new models. The CL600 V-12 hits the road this spring, followed by the CL63 AMG and CL65 AMG. Never mind the sporty associations of the word “coupe.” The CL550 is oddly less exotic than its slightly older S Class sister (with which it shares the same platform).
It is also considerably more expensive. The base model set to go out of the showroom, in the words of one Mercedes technician, is “at about a penny under $100,000.” Despite its four doors, the S Class is sexier, slimmer, and less expensive by up to $35,000.

The CL550 honors spotlessness, showing where your fingers have been on the polished surface of the door handle. It also honors its luxuriating driver with a massage feature roll-ing up and down your back and be-bopping on your spine. These seats are alive!

Only a few concerns: At dusk, the interior begins to sketch itself in parameters of dash lights subtly embedded into the borders of the dash itself — perfect were not the padded dash a little big for its hand-stitched leather britches. The electro-luminescent instrument display, in which the speedometer needle is actually only a picture of a needle, clashes with the classic Cartier-like reality of the little metal-faced clock above the console.

In terms of handling, aficionados of go-kart intimacy (touch the wheel and the car turns, touch the gas and take off) may be a little disappointed. The CL550 works the other side of the street: You are liberated from the fractal universe in favor of traveling near-exclusively in a bump-less, smell-less, noiseless world, divorced from all road chaos. Turn the wheel and the car sweeps gracefully, almost without sensation, in a new direction. Hit the gas and the car announces its weight. It’s a rolling bank vault or, rather, less a conventional automobile than a fine piece of steel real estate.

This baby’s got big. But different luxury automobiles have different roles. For example, you serve a Ferrari; a Mercedes serves you. Rich men buy Ferraris as a boldly beautiful, voluptuous, capricious, and demanding mistress. A Mercedes takes on a more dutiful role. Less a product than a corporation of art, craft, ingenuity, and cool-hearted audacity, the CL550 is the stolid, blue-blooded spouse taken to an understated extreme — all stops pulled to make this ample automaton the best.