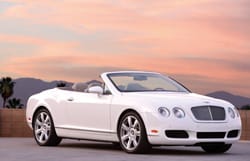 We knew the Bentley GTC was going to be good: It had a great head start, being based on the hugely competent and desirable GT Coupe. But we were awed by how thoroughly and completely able this car has turned out.

While most cars have several commendable features, few have so many good points that there’s little or no room for faults or complaints. The GTC is one of those cars.

To qualify that statement, you have to understand the design brief for the GTC. Rather than being a pedestrian, open-topped version of the blistering coupe, the GTC retains the tin top’s performance and handling abilities, yet adds the convertible roof.

If that sounds impossible (removing a fixed roof nearly always leads to a deterioration of the handling) you’re underestimating the engineering abilities of the Bentley team. It surely hasn’t been easy. And with an equal level of certainty, it hasn’t been cheap. But the results are so impressive you know that other luxury carmakers are scratching their heads, wondering how they will keep up.

First there’s the performance. Even though the coupe was already a heavy car, tipping the scales at more than 5,000 pounds, and even though the GTC adds another couple of hundred pounds, the 6.0-litre 552hp W12 engine still has power to spare. Effortless and almost rudely rapid progress is on tap from 0 to 195 mph.

That maximum output figure might suggest a ferocious and perhaps frightening power delivery, but nothing could be further from the truth. While the GTC has a surprisingly potent top-end speed, it’s the plateau of torque the engine serves up from 1,900 rpm that matters most. With 479 pounds/foot available, the six-speed auto box rarely has a problem finding the right gear for any occasion.

Handling, often compromised in the open-topped version of any car, is as rock solid in the GTC as in the coupe. That’s not to say it’s going to worry any true sports cars; it’s far too big a car for that. But its four-wheel drive and active suspension allow you to maintain the same dramatically high cruising speeds as the GT Coupe without causing yourself or the car any undue stress.

And that applies with the roof up or down. With the cloth roof in place, you’d barely notice that you were sitting under canvas rather than steel irrespective of the speed such is the silence. With the three-layered top neatly stowed away in the rear and the windows up, you and three friends can run around in calm comfort at speeds of up to 80 mph.

Above that speed, you’ll quickly find your rear passengers starting to ask, “Are we nearly there yet?” — to which the answer should almost invariably be “Yes.” That will allow you to erect the beautifully crafted aluminum and chrome windbreak across the rear seats to stop the breeze from intruding into the cabin even at three-figure speeds.

The next pleasant surprise is its amount of luggage space. Most open-toppers sacrifice function for fashion, preferring to bury the roof seamlessly by using up most of the available trunk capacity. Not so in the GTC. The redesigned rear suspension leaves a full eight cubic feet of stowage space even with the roof down. That’s well over half the size of the coupe’s generous 13-cubic-foot compartment and more than enough room for a decent amount of luggage.

Perhaps what crowns the GTC’s list of achievements is not any one aspect of its specification, but more the way it packages such hard-punching performance in such a plush, cosseting, and attractive car. There are more overtly sporty luxury convertibles, such as the DB9 Volante, but that demands much more of the driver to get the best out of it. And there are more expensive four-door open-toppers. The Rolls-Royce Drop Head Coupe will be along in a few months to show us exactly how much.

But for now, the GTC is in its own class. So it’s just as well that a comprehensive options list offers the long line of buyers some choices. The exquisite aluminum body shell can be had in any of 16 colors, the hand-stitched leather interior one of 17. There are four choices of interior wooden trim and five roof colors to top off the whole package.

We’re sure that there are some color combinations that are inadvisable, if purely for taste reasons. So please be careful when making your choice. It would be a shame if the only glaring mistake on this otherwise almost perfect car comes down to yours.

Rock-solid handling and a plush interior distinguish this convertible from other luxury models.