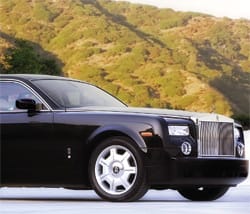 If you’re driving a Bentley GT, start saving now. The Rolls-Royce 101EX — it has no actual production name, and Rolls denies it will be built at all — is a lower, shorter GT version of the Phantom. In the same way that the car has been stretched to become the EWB (extended wheelbase), the 101EX compresses the architecture to create what Rolls designer Ian Cameron calls “a 21st century interpretation of a classic Grand Touring Coupe.”

While it retains most of the mechanical features of the Phantom — same V-12 engine, aluminum space frame, etc. — a couple of standout features ensure the 101EX will be the toast of the truffle set when it arrives. The first is an under-lit Spirit of Ecstasy made from what looks like Lalique glass. The second is the Starlight headliner, with a network of fiber optics embedded in the leather to create the impression of a star-filled night sky. It’s said this constellation will be customizable. So, in theory at least, you will be able to have your birthday star sign right over your head.

But before you can do that, you’ll need to put your name on the list at the local dealer (Desert European Motorcars in Rancho Mirage). And Rolls needs to start building them — or at least admit that it’s going to.

The situation begs the question, how much is enough? It’s all part of mapping out our needs and desires. However cursorily you look at them, from bank statements to the contents of your fridge, you are constantly appraising if you have sufficient funds for your current and future needs — unless you own a Phantom EWB, the pinnacle of luxury motoring that suggests you are completely post-economic and free to indulge and obsess over details so small and trivial people think you are unreasonably demanding. But you’re not. You just know what you like and go for it.

While there is absolutely nothing wrong and just about everything right with the standard — if it can be called that — car, the EWB opens up a world of Sybaritic possibilities to the top 5 percent of the already rarified RR-owning classes.

The mind-boggling list of personalization possibilities through what Rolls calls its Bespoke extends the mind and pocket so much that it’s easier to describe what you can’t do to the interior. From concert-grade audiovisual to champagne fridges to a dividing wall that separates passengers from the driver, let your mind wander through the options and let the nice man with the reassuringly firm handshake take care of it all.

The standard EWB has an extra 10 inches of room in the passenger cabin, and all of that’s from the joint where the front and rear doors meet. This makes the already roomy rear seating area positively sumptuous.

Getting in and out is also easier and more elegant with the coach-style doors, extended by the same 10 inches as the rest of the car.

Rolls has created the EWB in the same painstaking way that it builds everything, making this conveyance as far from being a cut-and-shut stretch limo as possible. To gain the extra length, the company uses longer extrusions for the body’s sides. The resulting laser-checked tolerances are better than a spacecraft’s, at less than half a millimeter.

The big Phantom weighs only 165 pounds more than the regular model, so performance and handling remain top-drawer. You have to make slight extra allowances for the extra length through sharp bends, but otherwise it’s as planted, sure, and express train quick as ever.

Talking about all these specifics is very un-Rolls like. The company has tradition-ally used language that doesn’t so much describe as allude to the car’s specification, performance, and price. So we should preserve that tradition here. The EWB has more than enough performance, an ample level of comfort, and costs … well, if you have to ask …