Rolls-Royce Drophead Coupé - what that means to Rolls-Royce 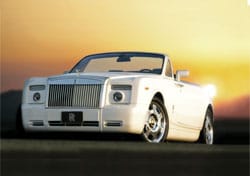 We’ve waited almost four years for the Rolls-Royce Drophead Coupé to arrive, but new Rolls-Royces are born almost as infrequently as new planets. So four years is a mere tick of the clock in the brand’s sumptuously upholstered history.
First seen as the concept 100EX at the 2004 Geneva auto show, the DHC was produced remarkably faithful to its original design. True, the more-than-ample 6.75-liter V12 engine from the Phantom replaced the concept’s monstrous nine-liter V16 engine. But other than that, the finished car remains almost exactly the same.
This is miraculous because manufacturers typically dumb down interesting concept cars before the production versions are born. Not so with this new Rolls. The finished car is not simply a Phantom with the roof cut off, but a wholly redesigned model with a combined form, structure, and style that is unique.
It wasn’t necessary to build a completely new car, but the company felt that even the smallest amount of compromise would be less than acceptable for its customers.
“Simply removing the Phantom’s roof could have made a great convertible, but it wouldn’t have made a perfect one,” Rolls-Royce Chief Designer Ian Cameron says. “With the Phantom Drophead Coupé, we had the chance to think about the very nature of convertible motoring and, in particular, what that means to Rolls-Royce.”
Having driven the car for several hundred miles, I think it’s clear that Rolls-Royce wasted little thinking time. Every single detail of open-topped motoring has been studied, sampled, and polished to a point where only an institution like Rolls-Royce could have produced the finely honed and considered results.
Let’s start with the way it looks. It’s unmistakably related to the Phantom, but has plenty of design details customized to its well-proportioned form. And it feels younger. The front grille is raked, not upright. The hood is available in a raw stainless steel option — echoing a vintage Rolls design cue. Even the Spirit of Ecstasy has had a detailed face lift to give more definition to her features.
Toward the rear are huge A-pillars that wrap around the front and divert most of the air away from the cabin. Not all of it — there’s still enough to ruffle your curls, but never enough to blow them away.
Beneath these triangulated structures are the equally impressive front-opening doors, which open and close with the same accuracy and substance as a bank safe. There are no rear doors, but the front seats scoot forward so quickly that getting people into or out of the back is always easy.
The trunk is huge (big enough for three golf bags), but that’s far from its best feature. Though useful luggage space is rare in any convertible, it’s the fold-down trunk lid that gets the applause here. Capable of supporting 330 pounds, it’s sure to become a favorite perch for luxury tailgating.
The other notable rear feature is the optional teak decking. Nothing in the automotive world compares with it. It’s more like the deck of a hand-built Italian launch than the rear shelf of a convertible car and is, in and of itself, a symbol of the amount of workmanship and thought that went into this car.
The 30 individual pieces of teak that comprise each deck are matched for grain and color, but even before the trees have been taken to the wood shop, Rolls-Royce controls the color and quality. While most teak floats down a river to be processed, elephants drag Rolls-Royce’s teak from the jungle (floating the trees affects the wood’s structure and coloring — not by much, but enough to make the craftsmen at Goodwood reject it; nearly right is precisely wrong at Rolls-Royce).
That is also why the DHC has a cloth, not metal, hood. Apart from leaving more space for luggage, the company asserts that a cloth top — the biggest on any car you can buy today, incidentally — looks better and captures a sense of drama you don’t get with a removable tin top.
It’s significantly lighter than it could be. Even with the textile roof, the car tips the scales at more than 5,700 pounds, so it’s no lightweight. But you’d never know it from the way it performs. Thanks to the fabulously rigid aluminum space frame and the car being 9.8 inches shorter than the Phantom, the DHC is lighter than the sedan.
It carries its weight lower and is powered by the same 453 bhp V12 that wafts the Phantom along. The result is a car that turns in quicker, holds its lines better, and maybe even accelerates a smidge faster. It’s more sporty, but in a Rolls-Royce kind of way.
In typical Rolls fashion, the DHC has a long waiting list. Each one takes 350 man-hours to make, not including the time to assemble the engine. So you shouldn’t expect to buy one any time soon, even if you can afford the base price of more than $400,000.
You’ve waited four years for the company to start building it, so what’s another year or so? I can assure you it will be more than worth your time.