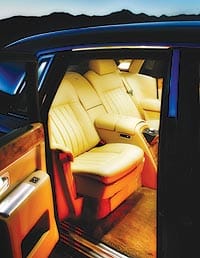 Luxury is such an overused word, particularly in the auto business. There are personal luxury sedans — invented by Ford with its 1958 four-seat Thunderbird — and near-luxury brands, such as Audis and Infinitis. Then there are the mid- and full-sized luxury offerings. Yet however marketers try to refine and polish their ever-more similar wares, only one true luxury car remains: the Rolls-Royce.

You can argue that your Maybach is more expensive, has more gadgets, or is more customizable, but you would be missing the point. The Rolls has more class in one carefully turned wheel nut than the Maybach can muster in all 62 inches of its finely crafted but ultimately soulless wheelbase.

You could say your Bentley is faster and handles better — and costs less than half the price — and you would be both right and wrong at the same time. The Phantom (base price: $320,000) might not zip down the road like the GT, but it never feels slow or underpowered.

Rolls-Royces have the breeding. They might share a few parts with the visually challenged BMW 7 Series — notably the V12 engine and a dumbed-down version of the fabulously overcomplicated I-drive instrument system — but the new Phantom feels more British than the Houses of Parliament, cricket, or a wet weekend in the middle of summer.

Ironically, it took a German company to bring the marque back to prominence, but then BMW is rather good at reinventing British brands. It breathed life into Land Rover, bringing us the fabulous Range Rover. Then it saved Mini from a near-death experience by throwing away everything other than the badge and starting again. And now, with classic Teutonic attention to British detail, it has completely reinvented the Rolls.

One noticeable side effect of this revamping is that all three cars have become highly attractive caricatures of their previous forms. You don’t notice it so much with the Land Rover and the (now not so) Mini, but get close to the 19-foot-long Roller and you feel positively Lilliputian. From a distance you don’t notice it; all the proportions appear normal. But standing next to the 20-inch standard wheels and the chest-high hood gives you a feeling of being in the presence of a highly substantial object.

This does nothing to stop people from staring, whether standing silently at the side of the street or cutting a broad swath through traffic. Seeing a Rolls on the road is a memorable occasion — that huge portcullis of a grille rushing silently toward you on the front of a more than 5,700-pound mass of aluminum, rubber, and leather.

Driving the Phantom is similarly imposing. Literally climbing behind the wheel, you perch yourself on the high-set seats and look over the roof deck-sized hood as you clasp the skinny three-spoke wheel and wonder if your feet will reach the pedals.

In among the hand-polished wood, lovingly tanned leather, and old-new sans serif typefaces are all the usual controls for heat and sound. But then you play with the organ-stop air controls and the clock rotates back into the fascia to reveal the high-tech central control that allows you to do everything from see a weather forecast to watch television.

Once you are underway, the Phantom is not one of those cars that shrinks around you in the way the Bentley GT does. It stays resolutely huge. Even so, you quickly overcome initial intimidation and sit back and enjoy the ride. This is not a car you throw into corners and screech out of intersections with your knuckles wrapped tightly around the wheel. You drive it with your fingertips, often with one hand, such is the ridiculously small effort required to navigate it.

But don’t think it’s slow, because it’s not. Even lazily applying a shoe to the accelerator has the Phantom burrowing down into its vast torque reserves and catapulting you forward satisfyingly. It doesn’t feel 100 percent right to do it, a more sedate pace being much better suited to the rest of the Rolls’ character. However, it’s good to know that you can beat that annoying, spotty kid in his noisy Honda away from the lights.

For all this praise, the triumphantly reborn Phantom is not perfect. To my eyes, those rear lights are too small and the wheel rim design is not up to the rest of the car’s high standards. But that’s just my view. A Rolls-Royce will always have its own character and personality – if you don’t like all of it, so be it. That doesn’t stop it from being simply the only true luxury car in the world.

When you’ve owned 36 Rolls-Royces, you can say what you like about the cars. That’s Roy Sklarin’s view. And as he recently took delivery of that 36th Spirit of Ecstasy, he’s in full flow.

“There are several details I don’t like about the [Phantom],” he says. “The taillights are too small, and the black trim around the rear window — when there’s so much chrome everywhere else on the car — makes it look like the trim has fallen off. And those headlights are definitely too small.”

Before you think Sklarin is complaining, he’s not. You should know — if you don’t already — that he is the interior designer to the stars. He is paid by his celebrity clients to get details exactly right, so he seeks perfection in his own objects. Other than some palatial houses, those objects are mostly cars.

We’ll save the comments on those cars for another day. Right now, Sklarin has the Phantom in his crosshairs.

“The other things I don’t like? The buttons in the central armrest,” he quips. “They are right where you rest your elbow, so the lid on the center console opens when you are driving. Oh, and the position of the rear door closing buttons stinks.”

But as critical as Sklarin is of these details, he is full of praise for the Phantom. “It’s the first real Rolls-Royce since the Silver Cloud,” he says. “It’s got real presence, and it drives superbly. It has such a wonderful feeling of comfort and safety, it reminds me of driving my best yacht.”

From a man who owned yachts in the same way he now owns cars, that’s quite a recommendation.