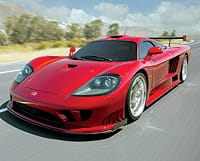 Wow! That’s the first word that springs to mind when you enter the unassuming set of buildings that house Saleen, home of the S7, America’s fastest supercar. And it’s one that you have to consciously stop yourself from repeating again and again as you take the tour around the impressive, 150,000-square-foot premises in Irvine.

The creator of hot Ford Mustang-based sports cars for the past couple of decades, Saleen is the eponymous industrial manifestation of founder and extraordinarily successful racer Steve Saleen. If you were going to ask anyone to build you a custom sports car, you could spend a long time and come up with much fewer qualified names than Saleen’s. He has built and raced cars — winning against some of the all-time greats — in more international series than most people have heard of. If anyone has the right to build the country’s fastest car, it’s him.

And that’s one reason Ford Motor Co. has gone public with the news that the manufacturer — note that Saleen builds complete cars, rather than only tune existing models — will be at the core of the four-company team that will produce Ford’s own much-lauded supercar, the Ford GT. Corporate compliments don’t get much better than that.

Ford had the confidence to go with Saleen for the GT work because his company had designed, built, tested, and certified the S7 hyper-performance supercar in only 18 months. In literary terms, that’s like writing War and Peace in a week.

Talking to Saleen, it quickly becomes apparent 2004 is a special year in his company’s history. In addition to landing the Ford work, the company is celebrating its 20th anniversary as a high-performance manufacturer. But the best reason to pop the champagne cork is the firm’s ability to survive the rigors of the U.S. sports car market for two decades. Remarkably, Saleen demonstrates a consistent ability to make products that get the collective U.S. pulse racing — and wallets opening.

The latest of these Saleen products — the $430,000 super-swift 2004 S7 — is standing, or rather crouching menacingly, right in front of us now. This car first shot onto the nation’s highways and racetracks in 2001, stunning spectators, competitors and, particularly, drivers with its jet speed and arrow handling. It immediately won hearts, minds, and trophies in equally large measure and continues to do so thanks to Saleen’s continual detail refinement and innovation.

In the three years since the car was launched, the S7R racing variant — not massively different from the road-going model — has claimed more than 50 pole positions and fastest laps, won 40 races in an assortment of countries, and prevailed in eight championships. If you know about these sorts of things, you’ll probably be suitably impressed that an S7R set a track record at the Le Mans 24 Hours endurance race.

The road-going S7 is basically the same car tamed a tad to make it usable in everyday driving. Conceived to “combine the performance of a race car with the driving pleasure of a road car,” the 2004 S7 has a lighter clutch, shorter first gear, and a wider power spread — recognizing that getting out of a Starbucks’ parking lot cleanly is as tricky as exiting a 180 mph racetrack corner in a car like this.

“With the improvements made in gearing, engine tuning, and aero[dynamics], the S7 is not only easier to drive at around-town speeds, but it’s also more fun,” Saleen says. “That doesn’t mean this is in any way a pussycat. We wouldn’t feel we had accomplished our mission if you didn’t come away from a drive around the block thinking the S7 felt like a race car for the street. We designed it that way.”

Get behind the wheel of this 7-liter V8 beast and you quickly learn that Saleen deals only in the truth. Despite the sophisticated leather and suede interior, complete with DVD and TV systems, once you awaken the engine, you have little doubt you are about to experience a raw, pure, and unforgettable driving experience.

As the clutch feeds in, the motor’s 575 bhp and 570 pound-foot of torque hastily make their way to the 20-inch, foot-wide Pirelli rear tires, lighting them up and sending the back end sideways even before we’ve left the car lot. Zero to 60 mph takes less than three seconds, but as you get compressed back into the figure-hugging seats, you can’t count quickly enough to know. You try and say, “Wow!” — but there’s so much pressure on your chest it turns into a breathy “Whhhhhaaw.”

Then you realize a turn — quite a sharp turn — is approaching fast, certainly faster than you think possible to enter and emerge in one piece. But then you hadn’t bargained for the S7’s almost absurdly huge 15-inch ventilated disc brakes, which can apparently stop this 3,000-pound car as fast as a DVD player can pause a four-ounce disc. So you’re fine.

Because the car has no turbos or superchargers, power delivery and speed build in a relatively linear fashion, albeit in a line that has the attitude of a ground-to-air missile. As the speed rises, the S7 digs deeper and deeper into the tarmac as the carbon fiber bodywork’s swooping folds and ducts compress the car into the road, allowing the driver to attack the pavement ahead with confidence. The aerodynamics are so effective that at 160 mph, you could drive the S7 upside-down.

The Saleen S7 is full of features like that — and many more. But they’re all best experienced rather than read about. So if you’re ready for the best supercar the United States has ever produced, form a line at the door of Saleen in Irvine and prepare to be wowed.