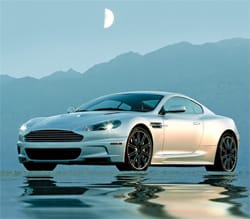 You can spend a lot of time explaining what the Aston Martin DBS is and what it is not. Yes, it is James Bond’s new car, the most expensive vehicle in its small class (for now), and a little sudden looking. But it’s not the replacement for the aged hero Vanquish, an all-new vehicle, or a street version of the Le Mans-winning DBR9 racer.

Usually, the fact that it’s a new Aston Martin — the world’s most chilled brand — is all most people need to know. But people stand and stare at the DBS. It is different. And although they love everything they see, they’re not quite sure how to place it in the company’s hierarchy.

Simply put, the DBS could be described as a sports version of the DB9. Aston Martin suggests it’s like a DB9 that has spent more time in the gym, but frankly it feels more like a DB9’s evil twin. There’s a sense of familiarity about everything, but also a sense of change — like a friend who has had a face lift.

Where the standard DB9 has a relaxed, grand touring feel, the DBS is more immediate, less cushioned, and raw. The steering is more sensitive, the wheel moving in your hands as it feeds back the road conditions. The Alcantara-covered seats have less cushioning and cosseting, the better to telegraph more of the outside world to you.

Then there’s the six-speed manual transmission. Seeing a self-selector on a car with this much power and torque, it’s clear it was designed for drivers, not passengers. Aston Martin offers a semi-automatic gearbox, but ordering that option means missing the point of this vehicle.

The V12 engine also leaves you with little doubt about the car’s intentions. Output from the normally aspirated unit jumps to 510 bhp from the DB9’s 450 bhp — and reminds you (and everyone else within a half-mile radius) of this every time you start it. Pressing the tablet-style “key” in the center of the dash wakes up the engine like it’s an hour late for something. Even with your foot clear of the gas pedal, the engine leaps from its slumber and rasps loudly to life, clearing its throat for yet another unforgettable journey.

While the bigger 20-inch wheels; the inflated, vented bodywork; and the deeper front spoiler suggest a new level of aggression and purpose, viewing the car from the rear tells the full story. Instead of the DB9’s tidy trunk, the DBS has a huge, multi-finned, carbon fiber splitter attached to the rear underside that emphasizes the “power” part of the Aston Martin’s mission statement.

All this work to the car should make it slightly easier handing over the extra $85,000 the DBS costs over a DB9 (the DBS is priced at $265,000). It would have been too easy for the DBS to have lost the DB9’s charm and sophistication in its quest to provide a sportier ride. But that hasn’t happened. Rather than replacing key brand values, the DBS accentuates the Aston Martin-ness and delivers a more sporting package. It has more power, more grip, and more speed, but not so much that the car loses its grace.

Therefore, the DBS is not a true, uncompromising sports car in the way of a Ferrari. Even at 220 pounds lighter than a DB9, it’s still too big and heavy to be truly nimble. But as a sportier, more visceral version of the DB9 that can consume long journeys at near airline speeds with little fuss or bother, it still excels.

You could hardly tell by looking at it, but Aston Martin has also refreshed the V8 Vantage.

Largely because it hit the design target the first time, the company has changed only the wheel design. All the development has happened under the car’s good-looking skin.

Power and torque increased, particularly in the midrange, to make for faster, safer overtaking. It reaches 60 mph faster from rest (4.7 seconds) and can hit 180 mph, yet it uses 13 percent less fuel.

The manual and Sportshift automated gearboxes were revised to make smoother, cleaner shifts. And the suspension has been substantially reworked to provide improved handling and steering.

For people wanting more serious performance, Aston Martin now offers a Sport Pack, which adds a range of enhanced chassis components. Having driven the car with and without this addition, my view is that it should be specified when ordering the car; the difference is appreciable.

Inside, the car now gets the same slick center console as its bigger brothers, including a sexy Emotional Control Unit ignition rather than a boring old key.

The Vantage has always been the best-looking and best-sounding car in its class. With these revisions, it is now one of the fastest and best handling, too. Prices start at $119,500.