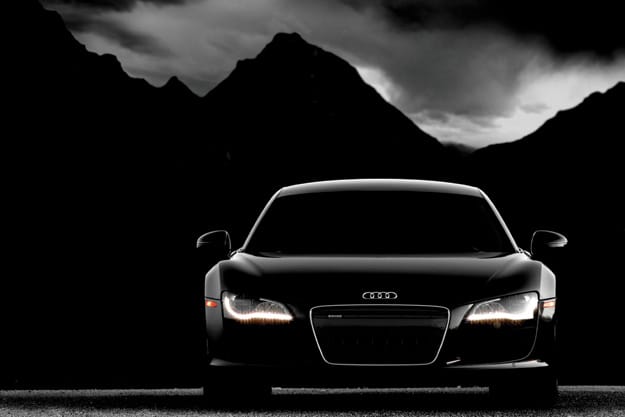 If you would be shocked to find the words “sensible” and “supercar” in the same sentence, sit for a moment. The Audi R8 is practical and comfortable, yet it outperforms most vehicles, proving itself as one of the fastest, best-handling production cars you can buy today.

Clues to how this apparent contradiction emerged lie in the exquisitely handcrafted R8’s parentage. It might have an Audi badge on the front grille, which explains its attention to fine detail and practicality, but under that wind-smoothed aluminum skin lie the genes of a Lamborghini — the stems of the R8’s supercar heritage.

Or at least some of it.

To be fair, Audi isn’t too shabby at making race cars; it has won the Le Mans 24-hour race countless times in recent years (the concept car that spawned the R8, which we drove on the streets of Palm Springs in 2005, was called the Audi Le Mans). So not all credit for the R8’s stellar speed derives from the Italian marque. But the fact remains that around 15 percent of the German car — the chassis and the transmission — has Italian, not German, as its first language.

The reason for this cross-fertilization is that Lamborghini was gobbled up in 1998 by the Volkswagen Group and has since been run by its Audi division. Initial expectations, after the relief that someone had stepped in to save the dwindling brand, were that Audi would inject much-needed quality and reliability into the often hair-raisingly fast and furious cars.

Management had much greater aspirations. They instilled newfound manners and previously unheard-of levels of precision and rigor to the brand. They also hatched a plan to transfer to Audi some of the Italian company’s exotic charm to put it on the luxury performance car map. The result was the R8 (from $123,300).

Launched at the Paris show in 2006, the car has been an extraordinary success. It has won hearts, minds, and awards by the boatload for its looks, character, and extraordinarily accessible performance. The entire 2008 production run sold out only a few days after its release, and there remains a waiting list of more than one year to get your hands on one.

It’s easy to see why. While the looks of the R8 are subjective, nothing else about the car is up for discussion. The mid-mounted 420 bhp 4.2-liter V8, visible through the clear engine cover behind the passenger compartment, has sufficient urge to propel the 3,400-pound car to more than 180 mph and from zero to 60 mph in less time than it takes to read this sentence.

If you are greedy for more go, the company has also started production of a 5.2-litre 520 bhp V10 (less power but more torque than the V10 in the Lamborghini Gallardo) that is half a second faster to 60 mph and will hit almost 200 mph in the right conditions. It’s not the super-hot R variant it was expected to be, but a faster version of almost exactly the same car. With precious few detail changes to indicate the bigger lungs, plus a waiting list that will stretch into infinity and the glaring fact that there’s nothing wrong with the standard car, it’s not something that should bother you yet. Likewise for the attractive roadster version, which goes into production in early 2010. So, it’s better to concentrate our attention on this R8.

That is particularly true for the passenger cabin, an Audi master class in interior design. A finely contrasting swathe of leather, Alcantara, aluminum, and carbon fiber has been woven with such precision and tight application it looks almost like it grew over the mechanical components. A key choice here is the manual gearbox, which operates far more smoothly and also looks so much better than the R-Tronic semi-automatic option.

It doesn’t matter which you choose, though. The rest of the R8 is so fabulously, fluidly smooth and powerful that you will soon be lost in its charms. Showing its practicality, it doesn’t feel that fast at first, quietly sauntering through towns, parking with ease, and swallowing shopping bags in the space behind the seats and the small space up front, smoothing the street surface with its active suspension all the while. But show it an open road and it will launch forward until your nerve — or the road runs out.

The curious thing about the R8  and why it has won so much acclaim is that your nerves remain supremely intact almost irrespective of the speed or the nature of the road you travel. The world might be flashing past at upward of 250 feet per second, but the car remains astonishingly composed and faithfully in your control at all times.

Ten years ago, before Audi started waving its wand over Lamborghini, the idea of a sensible supercar was one that started occasionally, didn’t regularly leave you stranded, and still scared the living hell out of you even in a straight line. With the launch of the R8, the concept has shifted and the once mutually exclusive terms of practicality and performance are now available in one place: the R8.