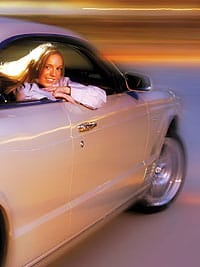 If you’re bored with talk about hybrids and economical cars, the Bentley Brooklands is the perfect antidote. We may all be driving around in silent, battery-powered cigar tubes in the not too distant future. But for now, we still can enjoy the fabulously grand excess that is the 2009 Brooklands Coupe.

It might be able to trace its lineage to the midcentury modern era; its design shows few, if any, newfangled technological improvements common on most other new cars.

With roots reaching into the bedrock of Bentley history, the Brooklands (from $340,990) is the last flourish of this elder-statesman part of the brand. While the newer, smaller Continental GT and Spur are still in their first flushes of youth, the big Brooklands marks the end of the Arnage/Azure line. Next year, an all-new big Bentley currently known only as BY601 will replace the range.

What a way to go. It’s not overstating the case to say that Bentley has saved the best for last. It might weigh in at slightly less than a Hummer H1, but this two-door behemoth can top 184 mph and hit 60 mph from rest in only five seconds — impressive figures entirely due to the malevolent 6.75-liter V8 under the hood.

You can’t argue with numbers like that. Bentley says that with 530 horsepower and 774 lb.-ft. of torque, it’s not only the most powerful engine they’ve ever made, it’s also the world’s most “torquey” car motor.

The fantastic numbers keep coming when you look over the rest of the car. Thanks to some of the most detailed, watchmaker-like levels of detail throughout the car, it takes just shy of 10 times longer to build a Brooklands than a regular Japanese hatchback. But it doesn’t take long to see where all that time has gone in.

Finishing the interior alone takes 125 hours to stitch the 16 cowhides and piece the 107 square feet of 80-year-old walnut. It then takes another 130 hours to make and fit the roof lining. The body is welded slowly and carefully by hand because robots can’t seem to handle the car’s smooth curves and dimensions. And then the car is polished for two days before being deemed fit for sale. Houses take less time to build than the Brooklands.

They don’t, however, offer the same amount of thrills. With the Sport button pressed, and the throttle buried in the lamb-wool carpeting (it takes the fleeces of 16 sheep to cover one Brooklands), it surges forward with a growing sensation of unstoppable force. It takes a few moments for even this overendowed, twin-turbocharged engine to get the car moving; but once it is, you feel like you would have more chance of stopping a tide than one of these.

The engine doesn’t roar; it thunders and rumbles in such a subsonic, visceral way that you feel like it could start an earthquake. Other than the distant, rock-splitting boom, the only other real sensation of speed is the blurring of the scenery and the descent of the fuel gauge. The Bentley engineers claim that they have cut fuel consumption by 60 percent and emissions by 99 percent since the engine first appeared in its original guise in the 1959 Bentley S2. Still, it could never be described as anything other than thirsty.

Despite its enormous mass and wheelbase, and in stark contrast to the more-stately Arnage T, the Brooklands is composed on all types of road. Thanks to a stiffer body shell — two doors instead of four helps here — it can run softer springs so the ride is superbly compliant without loads of roll in the corners when you pick up the pace. It’s effortlessly wieldy in the way a Rolls-Royce Phantom never will be.

This feeling of sure-footedness and integrity continues when you hit the brakes. The carbon ceramic brakes fitted to our test car might be a $16,500 option, but they should be standard to all potential buyers. Their feel and astonishing ability to wash away speed is extraordinary. That they also help reduce unsprung weight and make the Brooklands handle better should be considered a bonus — as should the whole idea of Brooklands ownership.

Bentley modestly assessed the market for the car at 550 units, but has already found buyers for more than that number. It’s easy to see why. By buying a Brooklands, you might not be saving the planet, but you are preserving a piece of tradition that will soon pass away.