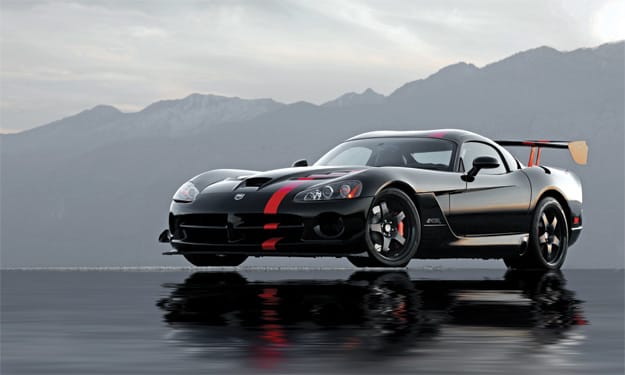 The Viper SRT-10 ACR is the last version of the Dodge supercar before its ailing parent company, Chrysler, sells off the Viper brand. It’s also by far the best. Powered by an 8.4-liter V10 producing 600 bhp, this genuine 200-mph car has been transformed into a raw, undiluted thrill seeker that works so well you wonder why it took Dodge so long to make it.

Before you think this is another straight-line missile with no cornering ability, you should know that ACR stands for American Club Racer, a badge that Dodge takes seriously.

In a recent test against a Lamborghini Gallardo Superleggera and a Porsche GT3 RS, with a professional race driver at the wheel, the Viper ACR was a full three seconds faster a lap than either Italy’s or Germany’s finest. It’s so much faster it’s almost embarrassing.

How it does that comes down to a small team of engineers at Dodge called the Street and Racing Technology department. They have no huge budgets, so to make the car lighter and faster they discard nonvital parts and retune what remains.

They first tried this on the original 1999 Viper ACR, but the 2008 version is a more comprehensive makeover. Where the first was something most weekend mechanics could have done to their Viper, this new one is something else.

The first reason for this is the extensive aerodynamic package. You won’t notice it at a glance, but look closely and you’ll see small aerodynamic devices designed to pin the car onto the road surface.

There’s a new deep front splitter and an adjustable rear wing, plus the bodywork was redesigned for efficient airflow over the car’s curves. Together they create more than 1,000 pounds of down force at 150 mph — more than 10 times the standard Viper.

The SRT engineers then created the optional Hard Core package, which omits the entire stereo system, all sound insulation material, boot carpeting, the emergency tire pump, and another 40 pounds. It adds carbon-fiber door panels and a lap timer.

The engine is mostly untouched. The V10 is hardly among the smoothest or most-fantastic-sounding engines in the world, but the numbers make it worth a little compromise. The only change in the powertrain is the addition of a new six-speed transmission.

Driving the ACR is a different experience altogether. Not only because of the nonstandard four-point racing harnesses and roll cage, which helped make it feel like a racer, but also because of the extraordinary sound.

In the stock car, the rumbling engine sounds relatively distant. In the ACR, it sounds like it’s sitting in the seat next to you. It doesn’t feel that fast at first, the engine gathering speed rather than soaring up to the redline, but that is deceiving: Snatch a couple of gears, give it some throttle, and you quickly find yourself way on the wrong side of 100 mph with little effort.

That might seem scary in a car as big and imposing as the Viper, but it’s not. Despite its apparent size, which is more of an optical illusion created by that huge hood — the Corvette has a wheelbase 7 inches longer than the Viper — the ACR handles corners like cars half its size and weight.

It’s not that the car is ridiculously fast; it’s not. The ACR simply gets better the faster you drive it. Get it into the race zone and all the aerodynamics, suspension, brakes, and tires blur to create a car you could drive to the track, win a race, and then drive home again.

As Dodge’s mission with the ACR was to create exactly that kind of car, it can only be described as a huge success — particularly as, like Dodge, I’ve been saving the best until last: The Viper SRT-10 ACR costs less than $100,000. The great American supercar has never looked meaner, faster, or better value. Get one while you still can.