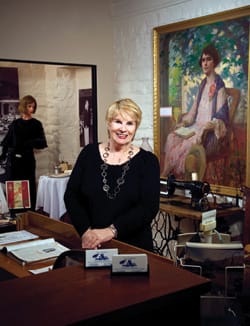 Sally McManus has developed the Palm Springs Historical Society, founded in 1955 by Melba Berry Bennett, into a visitor-friendly repository of photographs, documents, memorabilia, and videos. “I feel so privileged to have fallen into this,” she says.
Photo By Mark Davidson

When Sally McManus took over operation of the Palm Springs Historical Society 25 years ago, her predecessor told her, “All you have to do is smile and take tickets. Bring your radio. Bring a magazine.” McManus ignored the advice. “When I got here, I couldn’t believe the things we had,” she says. “I started getting things together and in order. We have thousands and thousands of photographs, negatives, slides, documents, letters, and maps.”

On June 1, McManus retires from her post as director of the historical society, but she will continue cataloging photographs and documents from her home.

“The responsibility has become heavy, and we are going into a different era and I just feel done,” she says. “I have got it off the ground, and I am very proud of what I have accomplished bringing it up to a certain point. I want someone to take over who will continue keeping it as it is. I am scared to death that we are going to lose our history.”

McManus moved from Rhode Island to Palm Springs in 1949 at the age of 12. Her first local job was waiting tables at a small restaurant in Cathedral City called Tommy Barker’s, known for its chicken. She subsequently held two jobs: at Lanz Dress Shop and as an usherette at the Plaza Theatre, both in downtown Palm Springs. “I would work at Lanz after school, have dinner at Louise’s Pantry, and then go next door to the Plaza Theatre,” she says.

Perhaps the McManus surname — a result of her marriage to the nephew of Palm Springs pioneer Pearl McManus — signaled her fate. As president of the Palm Springs Historical Society board in 1983, Elizabeth Kieley offered McManus the job of preserving the city’s past. The front portion of the building in which the society operates was once home to Palm Springs’ first white settler, John McCallum, and his family — including daughter Pearl — in the 1800s. (The structure was moved brick by brick in the early 1950s to its Village Green location from farther up Palm Canyon Drive.)

For 20 years, McManus worked alone in the historical society building, though she did have the help of volunteers (“Our volunteers are very, very important to us,” she says.) Research services and the society’s collection of photographs were unavailable to outside entities for some time. But eventually, McManus became an invaluable resource for media (including glossy magazines in Europe, China, and Japan and Good Morning America), students, and authors. Thanks to a photographic memory and curious nature, she learned to identify people in the thousands of images she cataloged. She also developed a list of contacts. “If I don’t know the answer, I know someone who does,” she says.

McManus recalls a time in the 1980s when a couple visited the historical society. The man had been a soldier in Palm Springs during World War II and he and his wife became friends with an older woman who offered them advice but whom they suspected was no longer living. The woman’s name, Louise Peel, rang a bell and McManus called her. “I put them on the phone, and they got together for lunch,” she says.

On another occasion, a visitor mentioned that he was related to Zaddie Bunker (Palm Springs’ “flying great grandmother”) and had been adopted by another family. “I said, ‘I think I know who your brothers and sisters are,’” McManus recalls. Sure enough, she reunited the siblings.

And when a woman who was visiting mentioned her grandfather had helped build the Ingleside Inn and worked for Palm Springs pioneer Nellie Coffman, McManus asked the woman for an oral history recording. “I have the most incredible tape from that man about what it was like to be in Palm Springs in his teens,” McManus says. She invited him to the annual Pioneer Picnic and made him an honorary pioneer. “His granddaughter told me after he died that it was the happiest day of his life,” she says.

Other visitors donate items that have been in their family or that they have otherwise acquired. “We have the most fabulous picture that was found at a garage sale in New Hampshire of people dining at a fashion show at the Desert Inn,” McManus notes. Similarly, when she’s going through boxes that include items that don’t relate to Palm Springs, she passes them on to a place that will appreciate their historical significance.

The only items at the historical society that were purchased are a postcard with a photograph by Stephen Willard and a key from the El Mirador hotel, both obtained through eBay. (McManus spent her own $50 on the key.)

Some of the donations spurred her to create exhibits. A few years before his death, she became friends with Bill Alexander, bandleader and drummer at the Chi Chi, Palm Springs’ hot spot in the 1940s and ’50s. Last summer, his daughter called and offered the historical society her father’s drum set, which McManus combined with a collection of other memorabilia from the club. “I had more fun doing that exhibit,” she says.

“I have never been so confident about any-thing in my life,” McManus declares. “The job is the thing that just changed my whole life.” But as much as she enjoys interacting with people and going through photographs, she has other plans for retirement.

“I just want to be able to go to movies by myself,” she says, noting her attraction to independent and foreign films. “My idea of a great afternoon is going to the Camelot Theatres, having lunch, and watching movies.”

She also might a memoir or book about Palm Springs.

“I have always wanted to call a book I wrote You Can’t Take Away the Mountain.”