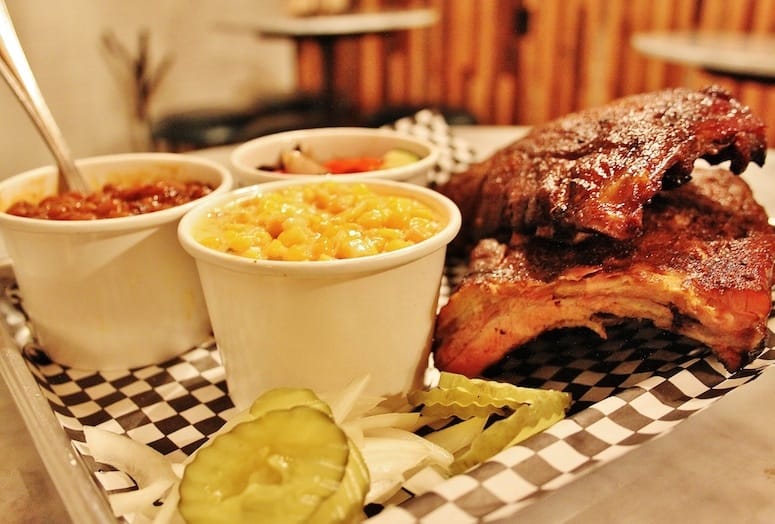 The “que” cravings actually began as 2014 closed with the third annual National BBQ competition event, “King of the Smoker,” at La Quinta Resort.

Top pitmasters and their teams from across the country competed for a $50,000 cash prize, but the best part was a serving of mini-classes from the pros that included tips, secrets, and insights for the home enthusiast.

Bring on the meat sweats. Here is a list of great bets for barbeque in the Coachella Valley. Sauces come in four varieties at Smoke Tree BBQ in Palm Springs. The method used to smoke and cook the meat can be debated, but however you like your ‘que’, the secret is in the sauce.

Meats are dry smoked using different varieties of hard woods at this BBQ spot owned by the family that runs Giuseppes (a couple doors down) and Bar. Tucked toward the back of Smoke Tree Shopping Center, it can be easy to miss, but once you taste the smoky, saucy, goodness of the poultry, beef and pork on offer, you will hope no one else finds out about it so you can be sure to get a seat. An expansive menu of appetizers, sides and desserts are on offer along with a full bar (crafted cocktails highlighting mescal, tequila, whiskey, gin), wine and beer selections. The beef and pork ribs and brisket are popular picks, but don’t miss the juicy smoked turkey, or the pork belly and brisket-tip appetizers. Four house-made sauces served at each table offer something to fire up the sweet spot of every palate. Lines form early each Thursday at the CV BBQ stand at Village Fest in downtown Palm Springs. Tri Tip is a crowd favorite.

This locally grown business began three years ago as a booth at Village Fest, running Thursday nights in downtown Palm Springs on Palm Canyon Drive. They are now a fixture at this weekly festival, and set-up in front of The Hyatt. They have rapidly expanded to bring their red wood, open-pit BBQ to the many festivals and events that make the Coachella Valley one of the most desirable destinations for tourism. Featuring Smoked Pork Baby Back Ribs, Beef Tri Tip, Pulled Pork, Chicken & Linguica (Portuguese smoked sausage), CV BBQ’s customer-centric philosophy has won them a loyal following. Look for them at Tour de Palm Springs, Shorty’s Rib Fest, Coachella & Stagecoach or book them to bring their tricked-out truck and portable grill to cater your private event, or special occasion. Texas meets So. Cal Mex in Tootie’s BBQ Taco. Charred corn tortillas are filled with chopped pork or beef brisket and topped with house made coleslaw.

This local restaurant may be the longest running BBQ joint in the area. Originally opened by Texans 14 years ago, it has changed hands several times and is now operated by owner, Chris Rogers. Rogers earned his BBQ and restaurant chops in short order when he came to help his ailing aunt go through a revamp to the space and menu in an episode of the popular Food Network show, Restaurant Impossible. He has taken the reigns and is keeping her dream alive. Look to this “Simple Mom and Pop Spot” for Mesquite-smoked pork, beef and chicken barbeque in the Texas style with two sauce options. Menu offerings include sandwiches, platters, and traditional “fixins.” For a unique Mex-Tex twist, try the BBQ Taco. Tootie’s loves to cater and can feed groups of up to 200 people. Babe’s BBQ & Brewhouse in Rancho Mirage takes ‘que’ to the next level with a Short Ribs Sampler paired with Vanilla Blonde Ale brewed on site at the restaurant.

Art Vasquez, COO at Babe's, is proud to share that, “Babe’s is not a BBQ restaurant. It is an amazing restaurant that sells BBQ.” What makes Babe’s unique is attributed to the legacy of its original owner, Don, the son of Marie Callendar, who created and ran Babe’s as his final flagship in a long and successful career in the restaurant business. The extensive menu offers much more than typical BBQ, with ribs and steak ranked as their top-sellers. Babe’s has also been brewing award-winning beers in their custom built brewery, with 8 in-house brews and a list of 50 micro brews. While the legacy of Don Callendar lives on through the on-going commitment to “getting things right,” recent updates to the space, menu and ambiance are moving toward a more casual, gastro pub concept. Top picks to try – The Short Ribs Sampler and the Belgian Vanilla Blonde Ale.