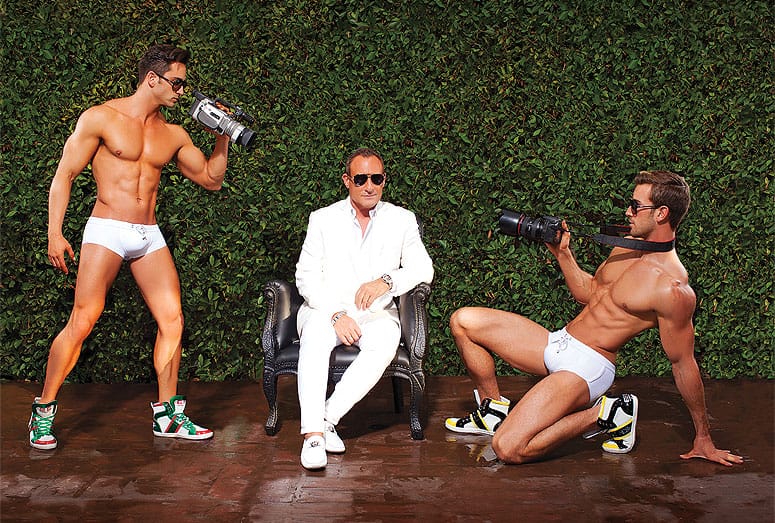 A back doorman at Studio 54 in the late 1970s, Jeffrey Sanker knows how to hold a great party. The New York club promoter moved to California in the 1980s and immediately fell in love with Palm Springs during his first visit. “We have an amazing oasis here, and it sparked my idea for daytime parties,” says the part-time resident, who splits his time between Palm Springs and L.A.

Sanker approached the Marquis Villas Resort in 1988 with his gay dance festival pitch and held his debut party in the ballroom the following year, drawing 500 friends from both coasts. “We lost money that year but got a lot of positive energy from it … and that kept me going.” In the days of yore before social media, party promotion relied on word of mouth, and Sanker managed to attract a few thousand festivalgoers only three years later. The four-day event now brings close to 30,000 fans to town each spring.

White Party Palm Springs is one of many in the gay festival circuit across the country. Was this the first?

It all began in Palm Springs. Later, I helped start the party in Miami. We used to call them “fly-ins” but referred to them as “circuits” after they started springing up in the 1990s. There are now about five in the United States, but Palm Springs is still the largest.

Everyone looks good in white in the springtime — tan, upbeat, smiley. Different cities have other colors, like the Black Party in New York.

In the late 1980s, Palm Springs was not the gay mecca we know today. Did you face adversity in the beginning?

We had huge opposition for the first 10 to 15 years. We would have to go before the city council for permits, and there was always a member against the event. I had to fight that, as well as people picketing and protesting at the event.

What’s one of your crazier stories from the Studio 54 days?

None I can print! But I had a lot of great times and learned many great lessons I still use today. Steve Rubell told me: “The one thing you own in life is your name,” and “always show up for your own party.”

How about an epic story from White Party?

It would not be White Party if there were not constant challenges. Like a couple of years ago when Lisa Vanderpump’s car was parked over an important cable for controlling the choreographed fireworks signal. We discovered this when we tried to shoot off the fireworks, and no one had the key to move her car. We had to crawl under the car, unplug the cable, move it from underneath the car, and then reconnect it — all in a matter of minutes. The longest two minutes of my life.

In what ways are you “upping the ante” this year — who’s making an appearance?

All I can tell you is that we’ve had such acts as Lady Gaga, Mary J. Blige, and JLo in the past, and we’re hoping for more people of that caliber this year. We’re also planning 15 minutes of synchronized fireworks.

Speaking of Lady Gaga, she was an unknown when she first appeared on the White Party scene. Do you try to book emerging talent?

I’d love to have Madonna and Cher, but my theme is finding cutting-edge talent and watching them grow. This is meaningful for me. Lady Gaga was the third act during a daytime pool party her first year — and the next year, she was the headliner of our big Saturday party.

Describe one of the most outlandish costumes you’ve seen.

I’ve seen a lot. It’s where people come to live their fantasy. But one year, a group of about 12 to 15 boys were wearing white balloons, like peacocks. They couldn’t dance close to each other because their balloons were so big. That was funny.

What do you envision for White Party in the next 25 years?

To keep fueling this cultural phenomenon and to appeal to more people who will fly in from all over the world to participate. Ages 22 to 50-plus, gay, straight.