The Sunday Tea Party held in the parking lot adjacent to the Palm Springs Convention Center is full of music, lights, a ferris wheel, and headliner entertainment.
PHOTOGRAPHY BY IGGY LOPEZ

During the time he was fighting his illness, Chris Diamond and Sanker worked very close together. Diamond says Sanker entrusted him to continue and keep the legacy of the White Party moving forward. “He decided he wanted me to do that,” says Diamond, executive producer of White Party Global, a new branding title for an organization that has taken its parties international.

“He said to me, ‘Promise me that you will keep the party going on.’ My reply was, ‘Absolutely, we’re going to try to keep it going,’” Diamond says.

Sanker established the White Party brand in Palm Springs back in 1989, when he invited 500 of his friends to the desert as a positive way for the gay community to celebrate after a devastating decade of the AIDS epidemic. More than 30 years later, the White Party has annually attracted more than 30,000 gay men over a four-day weekend featuring over-the-top parties and top-tier entertainment, including Lady Gaga, Arianna Grande, and Kylie Minogue.

“We were really saddened that Jeffrey passed away, but he left an amazing legacy behind. The White Party became such a backbone of the LGBTQ community,” says Diamond.

Sanker’s life will be celebrated during the April 30 party at the convention center under the theme, WP Eternal, featuring headliner Raye, a British singer and songwriter known for the single, “Call on Me”. “That is in honor of Jeffrey, even though Jeffrey has passed on, White Party will eternally go on forever,” Diamond says.

Palm Springs Life further spoke with Diamond about the White Party’s return to Palm Springs and what the future holds. 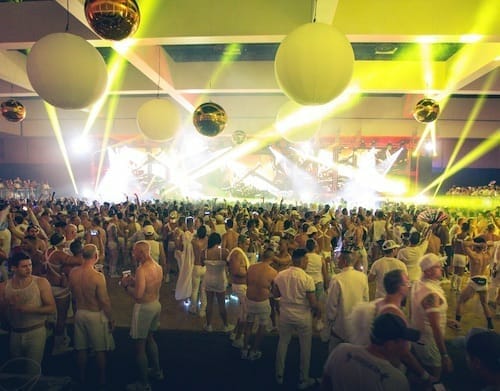 The Saturday night White Party at the Palm Springs Convention Center will be headlined by British singer and songwriter, Raye.

How does it feel to have the White Party back, after a two-year break because of the pandemic?

It feels amazing. I think everybody's tired of dealing with COVID. It's all been pretty stressful. I think it was so exciting that we're finally able to get together and it seems to continue to get better, which is really great news. We're very excited.

Will there be any changes to how it is run this year in Palm Springs such as the event format?

We have decided to go with a similar format. Since we're honoring Jeffrey, most of us are part of the same team that he used. We have 13 deejays from all around the world, among some exciting new talented deejays. We've just announced Raye. We have really exciting new talent performing at the White Party.

I think one of the things is we decided to call the company White Party Global. We talked about expanding the brand. I think it was around six, seven years ago. I invited Jeffrey down to Puerto Vallarta, Mexico. I said, ‘Maybe we should do some White Parties down here.’ Jeffrey loved being in Puerto Vallarta. We started a club there and White Parties have been going on for the last six years there. The idea White Party Global was born; we could do other cities and possibly expand the brand.

What is the White Party’s message to the world?

Welcome back. Please come enjoy the party here in Palm Springs. If you don't come to the White Party, you're really missing out. It's a chance to meet new friends and make long-lasting relationships. 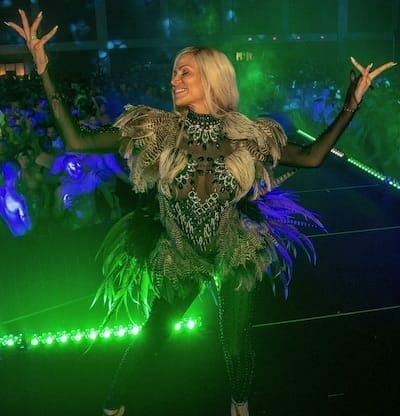 For the Palm Springs event, will there be a requirement for proof of vaccination or a negative Covid test to get access to the party grounds?

Whatever the rules are, what protocols the city and the state will have, we'll follow them. They keep changing, and they keep us updated. Whatever needs to be done to keep everybody safe is what we're going to do.

Have you noticed an uptick in ticket sales since restrictions have been lessened lately?

All of a sudden, we just announced all the parties on sale, and we got a big uptick in sales. I think because people really want to go out, because other parties have been canceled. This is the first one. It's right after Coachella, which has also lifted their restrictions. I think people are just dying to get back to normal. I think it’s going to be very fun and successful.