White Party Palm Springs Gets its Om On 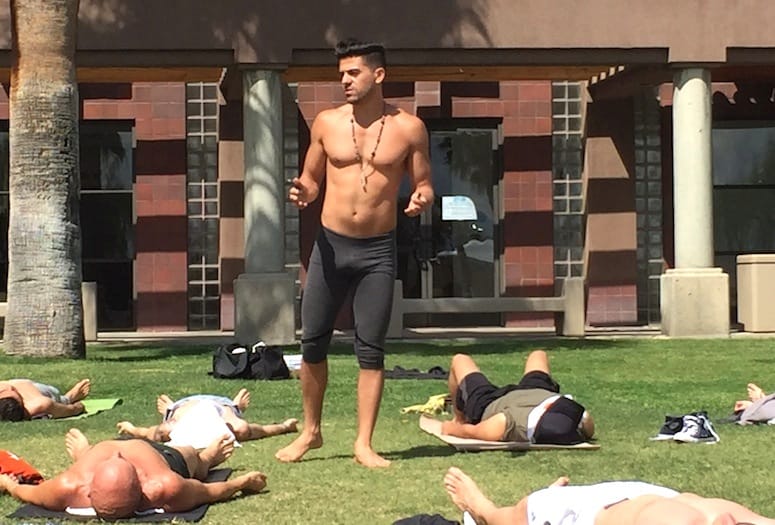 When somebody says White Party, yoga is probably not the first thing that comes to mind. After all, the May 5-8 event is billed as “the world’s hottest gay weekend of non-stop dance parties.” With eight parties packed into 72 hours, who doesn’t need an occasional respite from the dance floor?

For the third consecutive year, wellness therapist and Yogi Master Francisco Ramos brings his hour-long warrior yoga classes to the wide lawn behind the Renaissance Palm Springs Hotel, May 6-7. Designed to help participants recharge and renew, warrior yoga is the fusion of the classical Ashtanga Yoga asanas (poses) and pranayama (breath control) with meditations along with philosophies and discipline of stretching and strength training.

Variations on traditional yoga classes are nothing new. Today yoga is not just about downward dogs, but you can also find places to do yoga with your dog. Palm Springs Life caught up with Ramos to ask why his yoga meshes with White Party Palm Springs.

PSL: White Party Yoga: How did this happen?

Francisco Ramos: My company, Zen Casa (www.zencasa.net) is based in West Hollywood and one of my clients is Phil Lobel, who does public relations for the White Party. We were talking about the party a couple years ago and all the activities they have, and I said what would be really great is if you guys offered this to everyone in the community that’s attending. At first he was skeptical, but I pointed out that there are people who don’t stay up until 5 or 6 in the morning, those who go to bed at around, say 2 a.m…and they get up in the morning and want to do something with other people, either to interact or they want to do some sort of healthy activity like a workout. Especially for gays who are coming from different parts of the country, it’s an opportunity for them to interact more on a different level with people.

PSL: So this won’t be your first time…

FR: It was in 2015 that we tried this for the first time, over the weekend. The first day was a little low attended but the second day we had a full class of 30 people. So we were like, let’s continue this! And then last year we filled up the entire lawn. 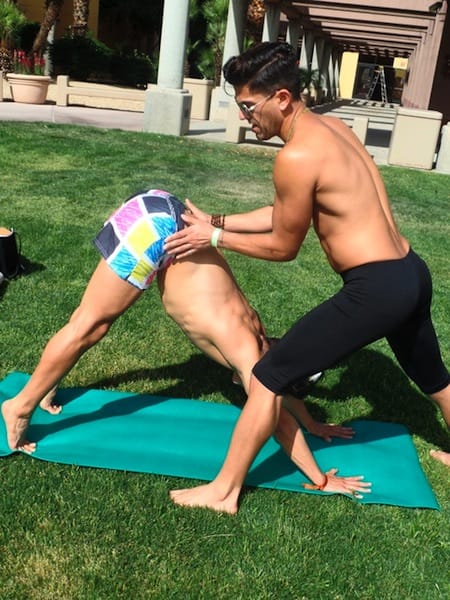 Francisco Ramos on bringing yoga to White Party Palm Springs: “I’ve always found [yoga] to be a great space for people to come and be their authentic selves.”

PSL: Why does yoga seem like a good fit at this event?

FR: I just really wanted to offer an opportunity to create this kind of space for those who either wanted a break from the party or wanted a different experience while they were in Palm Springs at White Party. I’ve been teaching for over seven years, primarily to the LGBT community. So I’ve always found [yoga] to be a great space for people to come and be their authentic selves.

PSL: Was there support from the party organizers?

FR: Having an optional yoga component speaks to Jeffrey Sanker really wanting to keep up with the times and to evolve White Party to serve the community. You know, gays come from all walks of life, backgrounds, and interests, and to be able to accommodate the needs and desires of everybody is great.

PSL: Are you looking forward to doing this in Palm Springs?

FR: Definitely. You can sometimes feel very compressed living in cities like L.A. So just coming here to Palm Springs with its feeling of physical openness is something I think people look forward to and it does help you recharge.

PSL: Will we see Belinda Carlisle [who will perform during White Party weekend] doing a downward dog?

FR: That would be something, especially if we could get that on video. We’re always up for surprises! 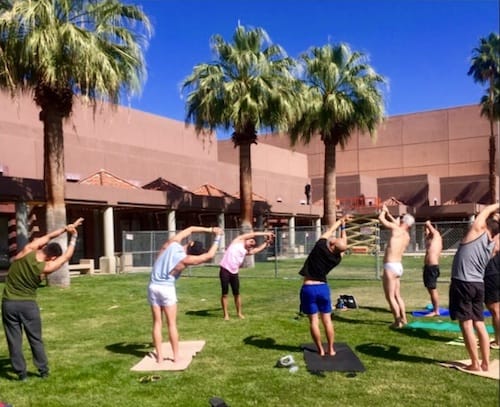