Desert dwellers out for a refreshing splash in Whitewater River on a hot day may give no thought to the higher source of their recreation. The headwaters of the river’s South Fork lie a mere 100 feet below the 11,503-foot peak of Mount San Gorgonio in the Sand to Snow National Monument.

Though too shallow and narrow for fish and boats, the river channels the majesty of a mountain through twists and turns in a steep and rugged topography to wash across the parched desert floor. In dry seasons, its water kisses the edges of loose rock. After a storm, like the deluge of Valentine’s Day 2019, it roars over them. Either way, Whitewater commands our attention to the natural world.

Steve Evans had his eye on Whitewater River before the turn of the century. When the U.S. Forest Service published its Southern California Mountains and Foothills Assessment in 1999, he served as conservation director for Friends of the River. In 2011, he became wild rivers director at California Wilderness Coalition.

“When the Forest Service started its plan revisions [completed in 2005],” he says, “the coalition nominated more than 50 streams as potential wild and scenic rivers, including Whitewater.” 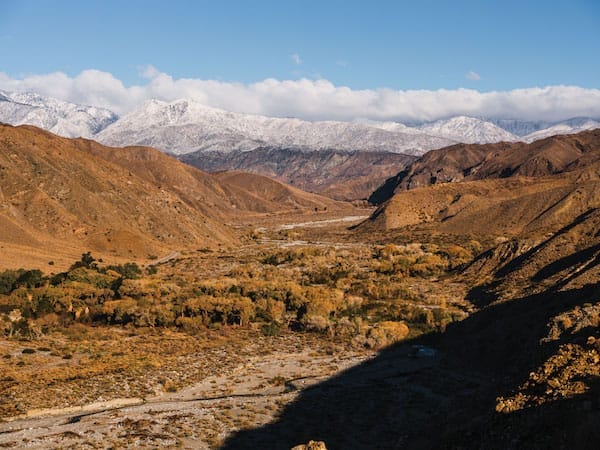 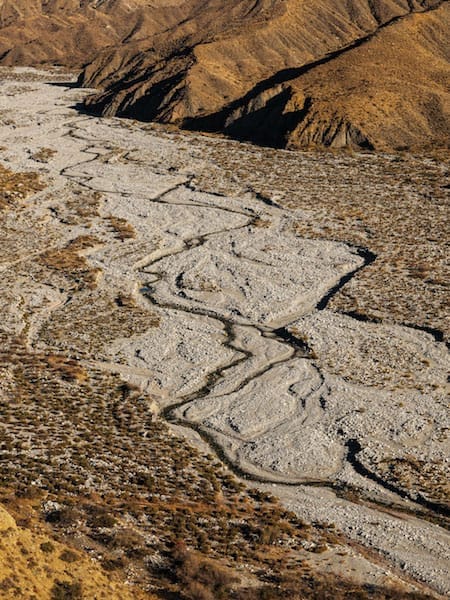 Frazier Haney, executive director of The Wildlands Conservancy, adds that Whitewater River provides critical habitat not only for bighorn sheep, but also for the mountain yellow-legged frog (both federally listed as endangered species) and nourishes San Gorgonio’s flora.

“There is a beautiful marsh at North Fork Meadows,” he says. “You see lemon lilies, penstemon, California fuchsia, and different species of willows.”

From there, Haney explains, “the canyon gets steep and narrows into a series of impenetrable forest and canyons and starts to make waterfalls where it approaches Whitewater. The biggest [of the falls] is over 100 feet.”

Although 28.1 miles of Whitewater River sound like a drop in the bucket among 13,412.5 miles covered in the National Wild and Scenic Rivers System, those who understand the tenets of conservation recognize that even a little means a lot. 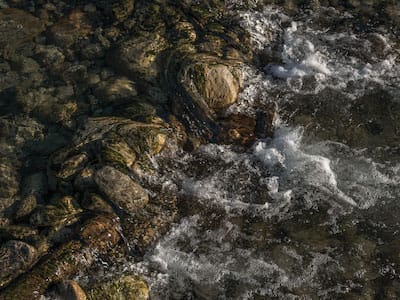 Three waterways in the Sand to Snow National Monument — Whitewater River, Deep Creek, and Holcomb Creek — were among 21 named wild and scenic rivers in the 2019 omnibus lands act. Jihadda Govan, the monument’s manager, points out that diversion preclusion is important, but that “there’s a lot more” to the designation, which requires a management plan that includes a “gap analysis.”

“Through that effort is how we identify where existing land management may not provide adequate protection of the ‘outstanding values’ associated with wild and scenic rivers along their banks,” she explains. “That’s what we are doing now: gathering information. Once we have that tightened up, we can start the official [National Environmental Policy Act] process.” 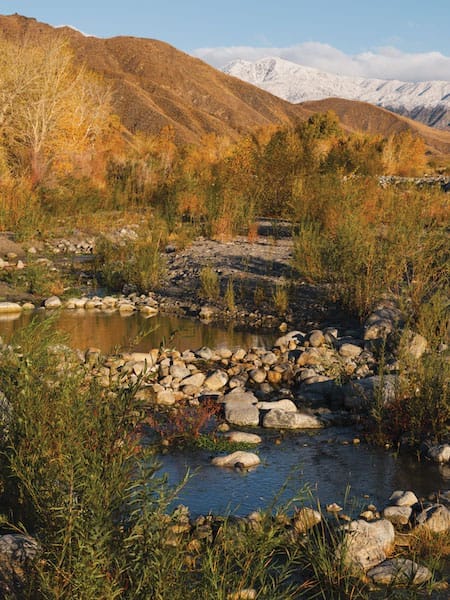 “Some small rivers probably have more value because they’re in an arid landscape.”

“The impact is that those 28 miles are protected, so no new dams can go in,” states Kirstin Heins, BLM’s California National Conservation Lands Program lead. She points out that national monument status does not preclude the building of a dam, as evidenced by plans in 1968 for a hydroelectric project in Marble Canyon National Monument (now part of Grand Canyon National Park).

“The reason it is so important to protect Whitewater,” Haney asserts, “is that in the past, there have been plans for flood basins, dams, and water diversions.”

A succession of water companies have built diversion structures and flumes on the river — beginning at least as early as 1850 and at least as high as 7,200 feet — to deliver water to Banning and Palm Springs. From 1970 to 1981, the U.S. Army Corps of Engineers proposed a half-dozen dams on the river.

More than 75,000 dams have modified 600,000-plus miles of American rivers. The Wild and Scenic Rivers Act of 1968 named eight rivers and identified 27 potentially eligible river sections for protection to keep them free flowing. The system now includes 226 rivers in 41 states and Puerto Rico. 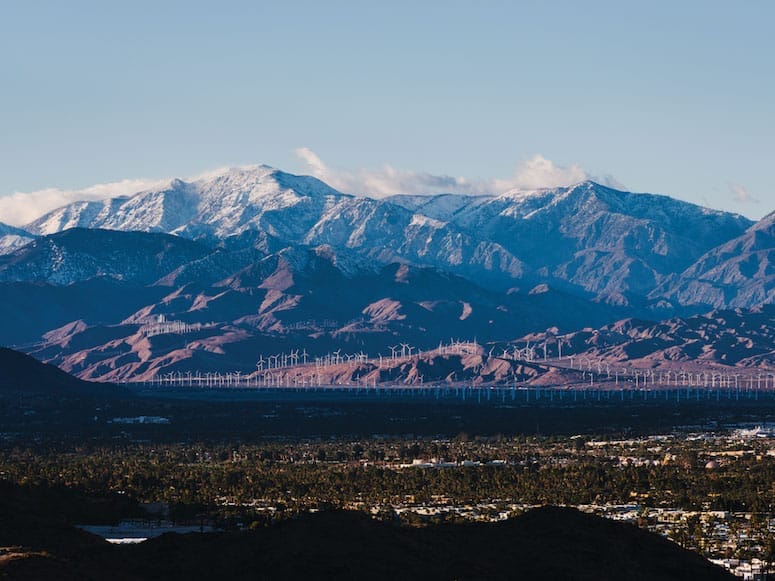 A view of the Sand to Snow National Monument captured from the San Gorgonio Pass wind farm area above Whitewater Canyon near Interstate 10.

Three waterways in the Sand to Snow National Monument — Whitewater River, Deep Creek, and Holcomb Creek — were among 21 named wild and scenic rivers in the 2019 omnibus lands act. Jihadda Govan, the monument’s manager, points out that diversion preclusion is important, but that “there’s a lot more” to the designation, which requires a management plan that includes a “gap analysis.”

“Through that effort is how we identify where existing land management may not provide adequate protection of the ‘outstanding values’ associated with wild and scenic rivers along their banks,” she explains. “That’s what we are doing now: gathering information. Once we have that tightened up, we can start the official [National Environmental Policy Act] process.” 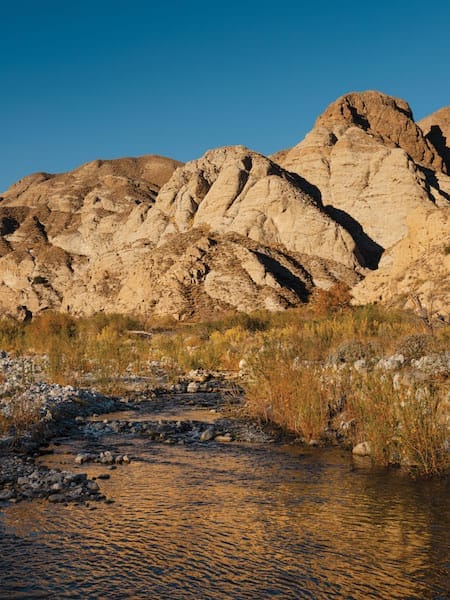 A sandstone cliff reflects in a soaking pond south of the entrance to Whitewater Preserve. 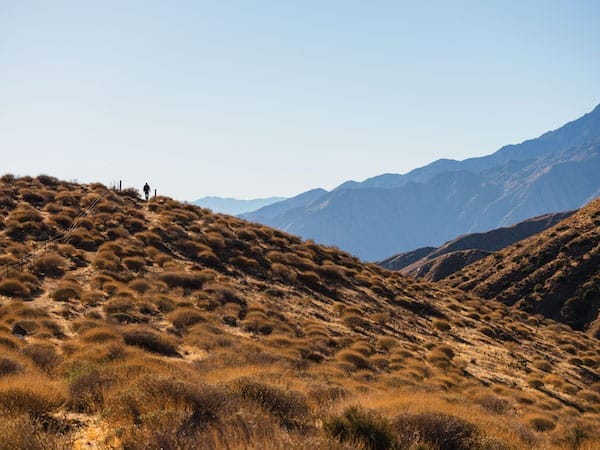 A hiker on the Canyon View Loop Trail inside the Sand to Snow National Monument.

Govan notes that wild and scenic rivers legislation provides federal dollars to cover the monument’s cost of hiring a consultant specializing in the complexities of NEPA documentation and an intern to collect user data (e.g., how many hikers are on the Pacific Crest Trail that intersects Whitewater River).

The river becomes accessible by road at Whitewater Preserve, so the lower 3.6 miles of the safeguarded stretch are classified as “recreational” versus the “wild” upper region. Trails in the national monument fall short of the headwaters. Jack Thompson, desert regional director of The Wildlands Conservancy, notes that very few people follow North Fork Meadows Trail beyond its Big Tree terminus.

“It’s a suffer fest,” he declares, “to get to a point where you can get near the river on stable ground.”

A hydroelectric plant built in the 1920s precluded Whitewater’s East Fork and upper reaches of its South Fork from being designated wild and scenic. Though that project’s power generation has been inoperable since a flood in 1998, pipes divert water from both forks to Banning. The designation ends just upstream of Desert Water Agency’s diversion south of the national monument boundary.

Cloaked in the folds of Mount San Gorgonio, Whitewater River lacks the prominence, width, and depth of other waterways in the national wild and scenic system. 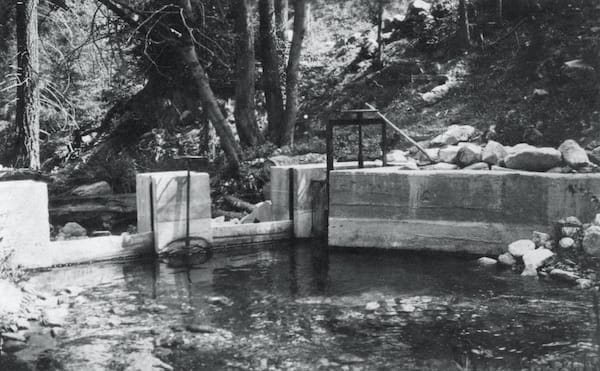 However, its designated portion ranges 8,200 feet in elevation, thus supporting a spectacular diversity of living creatures and plants. And then there’s the reason Heins appreciates it.
“Some small rivers probably have more value simply because they’re in an arid landscape,” she says. “Even though something isn’t a classic or boating river doesn’t mean it is less of a river. In some ways, it is more important because it is a rare resource.”

President Obama’s 2016 proclamation establishing the Sand to Snow National Monument notes its “knitting together a mosaic of spectacular landscapes stretching over 200 miles.” Here are highlights mentioned in the document:

• San Gorgonio Mountain is one end of the longest recorded lines of sight in the lower 48 states.

• Two branches of the Andreas Fault run through the monument. A change in the fault created a shift in direction that distinguishes the San Bernardino Mountain Range as running north-south, whereas most California ranges run east-west. Whitewater Canyon has been featured in numerous studies of plate tectonics and geologic rifting.

• Covering a range of nearly 10,000 feet in elevation, the monument includes an extraordinarily diverse range of ecosystems. It provides habitat for more than 240 species of birds and 32 species of migratory birds.

• The area is home to 12 federally listed threatened and endangered animal species and 14 native plant species. 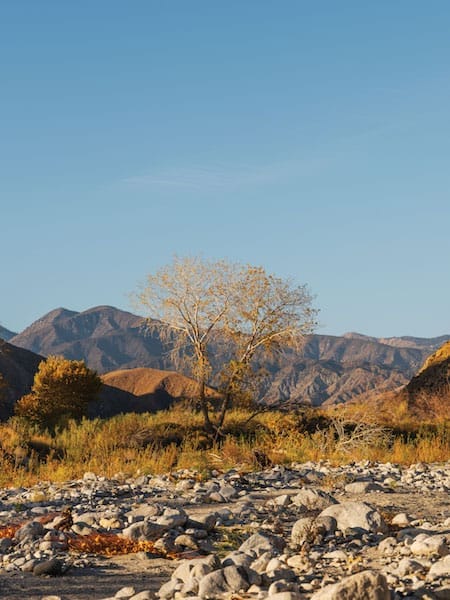 • READ NEXT: Discover Why Architect Paul Revere Williams Learned to Write Upside Down.