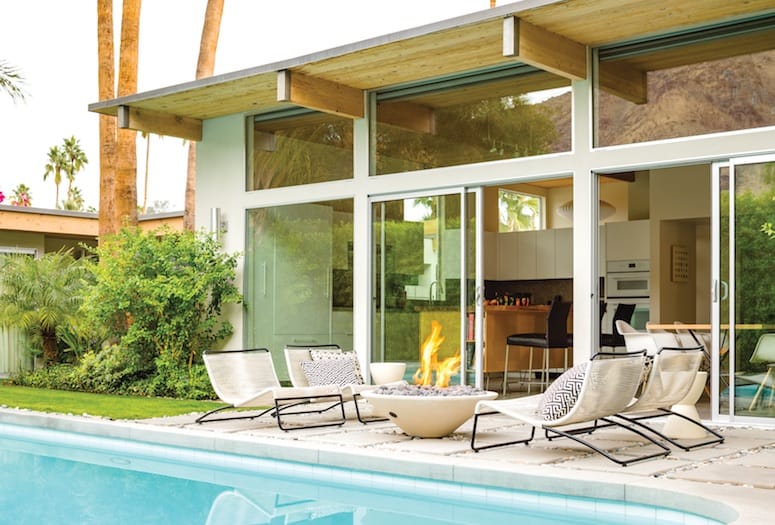 When an artist and an architect buy a house, the neighbors should count their lucky stars. The forthcoming improvements are sure to raise property values up and down the block. Meanwhile, inside, a type of theater ensues. With all that left-brain/right-brain chemistry, an overlapping pool of talent and interests, two masses of creative energy, plus the skill and vision to actually pull off that endless stream of ideas, each decision in the renovation process holds the potential for high drama, but with a highly aesthetic resolution.

Architect Stan Boles and artist Wendy Kahle weren’t new to vintage homes when they found their second Palm Springs vacation property by William Krisel. Rain-weary Portlanders, they were drawn to the city’s weather and its support of the arts and architecture. Their first vacation home, built by Krisel in 1960 for the Alexander Company, was in the Racquet Club area — and it was there that they met the architect himself, during an Alexander weekend tour. Krisel, Boles says, “told us he was in favor of updating his design with new materials as they come on the market.” Kahle adds that the architect didn’t seem to hold the mindset that “in order to have a real midcentury modern house, you can’t change a thing. You can improve upon it. Originally his houses were never meant to be full-time homes.”

While that first home was small and on a busy street, their second, roomier Krisel sits on a quiet dead end in Vista Las Palmas. The couple had always preferred Krisel’s flat-roofed models, designed with high ceilings above voluminous spaces.

“We were looking for a project house we could take down to the studs,” Boles says. Beyond that, the wish list grew more specific: The house should sit on the west side of the street. From the great room, west-facing mountain views should be free of telephone wires. A dead-end street would be a bonus. “It took us two years of driving, biking, and walking through neighborhoods to find the right one.”

The house’s post-and-beam construction appealed to Boles. Straight out of college, he had worked for two architects who had worked for the legendary Eero Saarinen and built their practice on the Finn’s modernist design philosophy. Meanwhile, the detached casita, conceived by a previous owner in the 1970s, seemed a natural fit for Kahle’s art studio. 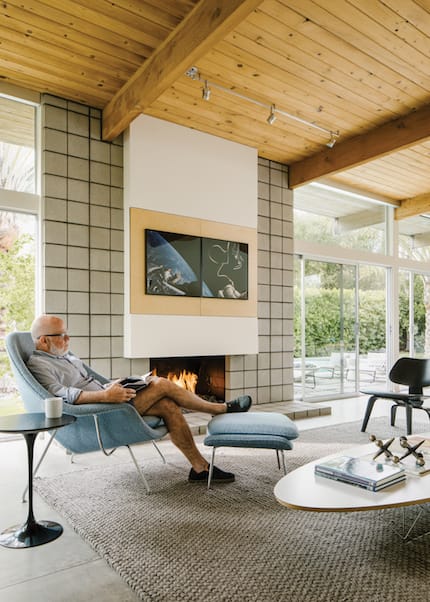 Stan Boles  in the living room. A cabinet he designed, with photographs by Michael Light on the doors, conceals the TV.

But one look at the cracked pool in the concrete-jungle backyard, the original floors too abused to restore, and the once-natural ceiling wood that hung like dark clouds in a mean olive green, and this artist and architect agreed: They wouldn’t be content to dust it off, slap some cheerful paint across the front door, and unload their furniture. Project found.

To approach the remodeled home now, one slips through a door set into a concrete block wall. Follow a narrow path that runs parallel to the side of the house, and leafy greenery and succulents reach out on each side in a living greeting. At the front door, sightlines extend all the way through the house and out a master bedroom window to more greenery.

Landscape emerged as a theme for the Oregonians, even from the interior. The green spaces they nurture become layered garden views from every room. Floor-to-ceiling windows and walls of glass sliders they built into their home’s new design capture a lush, indoor-outdoor  livability. Wide views of the mountains from the great room tick that box for the couple, with a new fire pit and pool in the foreground.

At 1,600 square feet, the main house, though recently renovated, emanates a supple, lived-in quality rarely seen in Alexanders. Exposed natural wood beams and ceilings create a serene warmth, tempered by the cool of Krisel-era natural concrete block inside and out. Boles and Kahle have perfected a comfortable, organic-modern aesthetic.

“There’s this idea of what people expect from a Palm Springs house,” Kahle muses. “We didn’t go for that idea of what many think midcentury modern looks like. Ours is a little bit more of a restrained, subdued palette.” 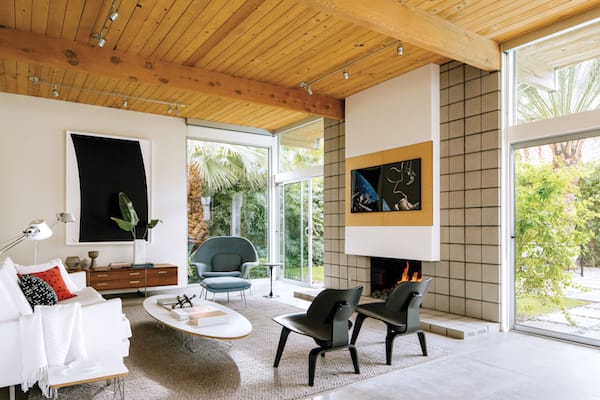 The addition  of the corner window opens views into the garden. Abstract print by Richard Serra.

“We wanted to create a contemporary  home while respecting the  original 1960 design and preserving its spirit.” Stan Boles

Furnishings seem to have a long-standing kinship but are actually a blend of vintage midcentury, Boles’ own designs, and modern pieces. Ethnic prints and fabrics add a bohemian whisper, especially when paired with large, potted plants thriving in rooms flooded with natural light.

The art on display includes the couple’s own work; Kahle’s etchings, prints, and paintings are interspersed with several paintings by Boles. The home is filled with these moments of overlapping paths, often influenced, if only subconsciously, by each other.

During his career, Boles worked on projects across the U.S. and China. After designing buildings and master plans for 25 college campuses and 40-plus visual and performing arts facilities, and designing and building 17 custom homes in Oregon and California, he began remodeling their second Krisel in 2014, the year he  officially retired.

“We wanted to create a contemporary, 21st-century, energy-efficient home while respecting the original 1960 design and preserving its spirit and character, the soul of what Krisel was trying to do,” he explains. 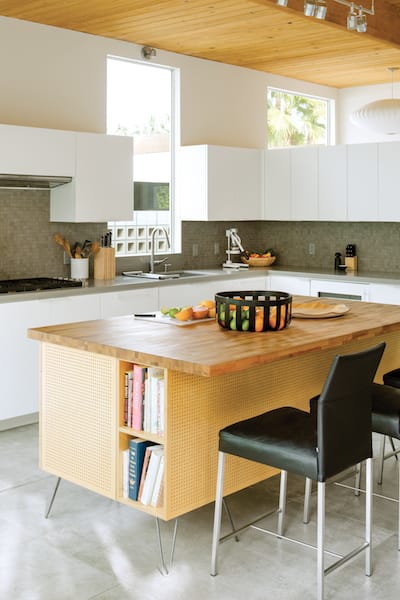 His creative force built on Krisel’s architectural  foundation. Keeping essentially the same structure, Boles opened up the floor plan to give more light and views to every room. Some walls were removed; others were dropped down so light and space could flow over the top. He doubled the window area and expanded the home’s footprint by using block walls to create privacy courtyards off the bedrooms and office. Smaller tweaks included reconfiguring closets and adding unobtrusive pocket doors.

For all its new glass, the home is private. “You can’t see another house from inside, from any window,” Kahle notes. In respect to its origins as a midcentury  Alexander, porcelain tile replicates the original concrete. Wood beams were sandblasted and then brushed with a clear finish. The plastered, repainted concrete block fireplace required some structural engineering; the couple rebuilt it to mirror Krisel’s original.

“I am a modernist and a minimalist. I think that that’s what Krisel was, too,” Boles says. “I think we actually took the house back to what it probably felt like in 1960.” This can be seen in the original open breezeway and carport, which read as charming yet practical. They even maintained but updated the outdoor laundry room that sits between the main house and the casita.

For all its new glass, the  home is private. “You  can’t see another house from inside, from any window.”Wendy Kahle

The home’s organic character lies in the couple’s choice of natural materials. Used consistently in a limited palette, they bring unity to all spaces and craft a tranquil aesthetic. Tile, paint, low-voltage light fixtures, and cabinetry, all hung at the same height, carry throughout the relatively small home. New mechanical, plumbing, and electric  systems were added, plus solar panels on the garage. When they discovered the casita was never permitted and was falling apart, they tore off the odd, guitar-shaped roof and designed a new building that matches the home’s geometry.

Boles says even as second homes, the Alexanders were designed with future flexibility in mind. “The beams are supported on the exterior wall, and there’s just one  column line in the middle of the house,” he notes. “It’s not like you have load-bearing walls you can’t move. As long as you keep the beams and you figure out a way to support an interior column, you can do anything you want with the arrangement of the partitions that make the space. They’re brilliantly designed homes for what they did and what they accomplished.” 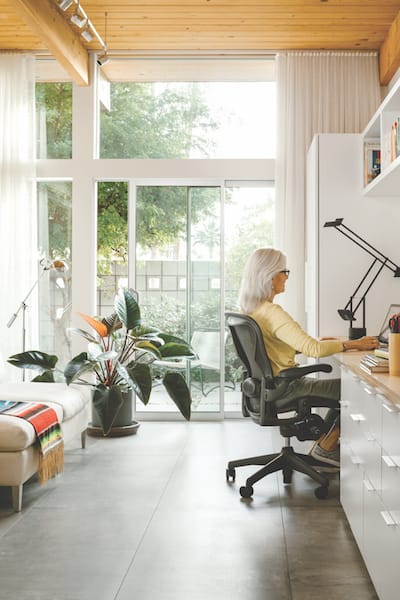 In what was a small bedroom, walls were eliminated and glass sliders were introduced to form a home office and library. The airy space between two bedrooms opens to a newly created private outdoor courtyard.

A home with the ability to open up and expand the kitchen was especially important for these two cooks. One night might be Middle Eastern fare; on another, Boles is rolling out pasta across the wood plateau of the kitchen island. Several times a week, he likes to barbecue.

Kahle has moved her art space to an off-site studio so she can paint on a larger scale and set up a printmaking press. Boles shares the space to work on architectural drawings. Currently, he is designing an Idyllwild house for a lot the couple purchased. That mountain project will serve as their summer getaway, enabling them to sell their condo in Portland and become desert full-timers.

Back in the casita, Kahle plays piano and works on smaller projects or paintings. The 400-square-foot structure also functions as a third bedroom and third bath for guests or a changing room during pool parties.

“One of our favorite things to do is come outside and have our morning coffee,” she says. “There’s this beautiful light on the mountains. At night, we use the fire pit. It’s a wonderful place to sit and have a glass of wine.” Beyond the home, their “dream neighborhood” has changed their lifestyle. They love riding their bikes to do errands, visit the museum, or go to dinner.

As for the home’s curb appeal, the artist and the architect have lavished a level of attention on the outside that rivals the interiors. Neighbors have noticed the front landscape, reborn in a concrete stepping path, perforated block wall, boulders, raised planters, and trees. Dead grass lawn and neglected shrubs have been replaced with desert plantings, Palo Verde trees, gravel, and boulders.

“It wasn’t hard to take the original idea and improve it,” Kahle says of Krisel’s framework. “A lot of Stan’s vision and touches really improved on what was there. Now we feel like it’s definitely ours.” 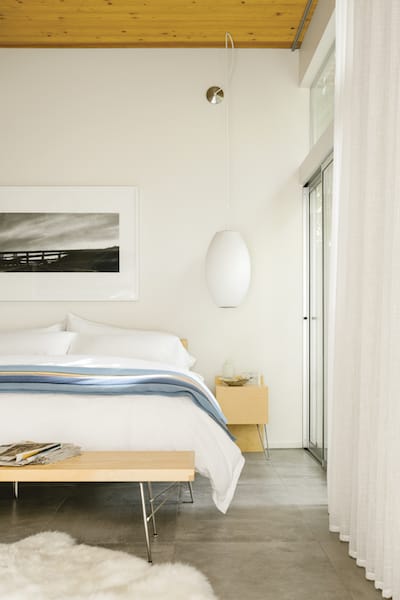 Floor-to-ceiling drapery in the bedrooms softly filters light and gives privacy. An Eric Nash drawing hangs over the bed.

Built-in shelves in the office add a library component to an open space that was originally a small bedroom. 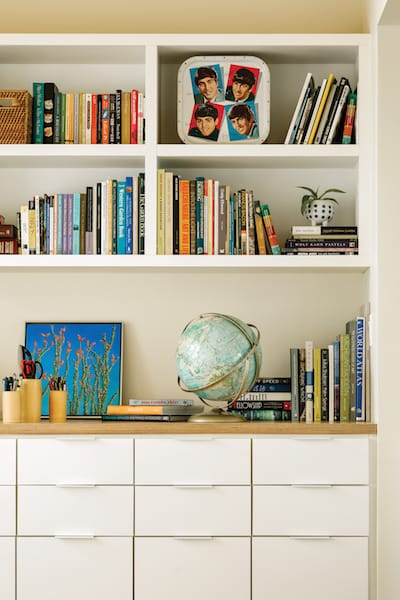