If a multidimensional spaceship had landed in 1968 among the homes in South Palm Springs, it’s quite possible it would have looked a lot like the Pod House. While this one-of-a-kind residence may be an anomaly among its more traditional modern and Spanish-style neighbors, it actually sprang from the fertile imagination of William Krisel, one of the masters of American midcentury architecture, who died last year at 92.

Known for his work on more than 2,500 affordable tract homes for George and Robert Alexander of the Alexander Construction Co., and local communities such as Kings Point and Canyon View Estates, Krisel took an approach to this commission — his only design comprising five interconnecting pods — that was much less restrained.

“Because of the nature of the development business — in other words, to maximize profits — Bill’s designs for the mass market were trim and efficient designs often in the shape of a square,” says Palm Springs Preservation Foundation board member and architect James R. Harlan. “The Pod House is a custom, one-off home. Because of this, his design is able to be more exuberant.” 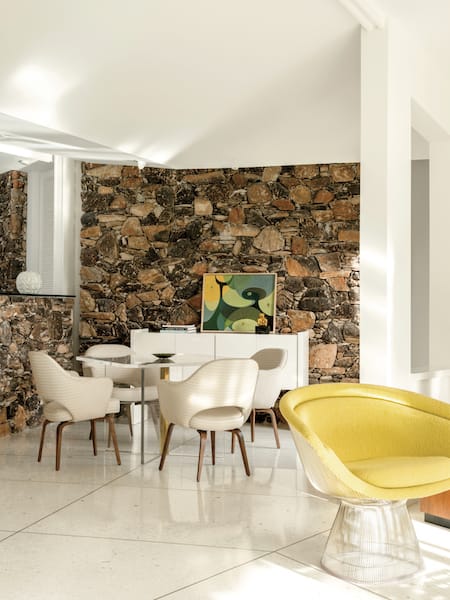 Furniture by Saarinen and Platner is up for grabs as part of the sale of William Krisel's Pod House. 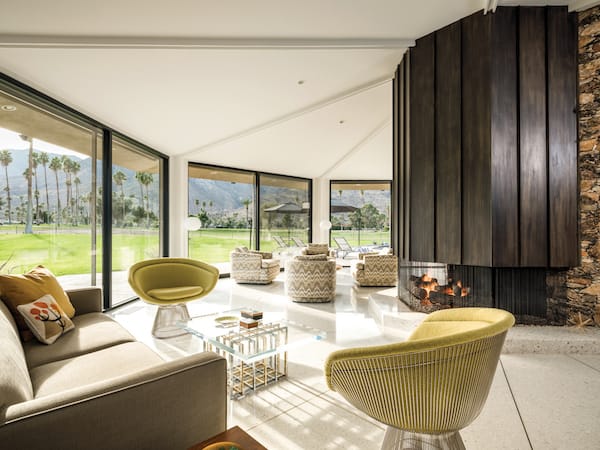 The largest pod is centered by a monumental structure housing a steel-encased fireplace on one side and a stone accent wall on the other.

Officially known as the Tipper-Grundt residence, the five-bedroom, four-and-a-half-bath Pod House is on the market at $2.495 million. Developer and builder Bob Grundt and his wife, Florence, acquired the ⅔-acre lot facing the fairway of the Canyon Country Club golf course (now Indian Canyons Golf Resort) in the 1960s and commissioned Krisel to design the home. (Grundt and Krisel also partnered on Kings Point.) It was later acquired by Maynard Tipper, inventor of the Tipper Tie, a machine for tying sausage casings.

The property has since changed hands more than a dozen times, but many of its attributes remain intact. Some of the original finishes include brass-seamed, poured white terrazzo floors and stacked rock walls, features also found in Krisel’s more traditional midcentury designs. “In his developments, he used the same rock on the accent exterior wall and at the fireplace,” says Harlan. “Krisel’s custom homes had more of the same stone.”

He notes that another Krisel, the House of Tomorrow, known as the honeymoon hideout of Elvis and Priscilla Presley, is also a series of pods. But unlike the units at the Tipper-Grundt residence, “they are enclosed by mega-roofs which encompass the entire home.”

The Pod House defied convention in other ways as well. “The most interesting element of the house is the flow,” says Tom Davila, the property’s listing agent and a principal at Rare Properties/Compass. “William Krisel told me he designed the house so you had to journey through it to eventually see the dramatic views." 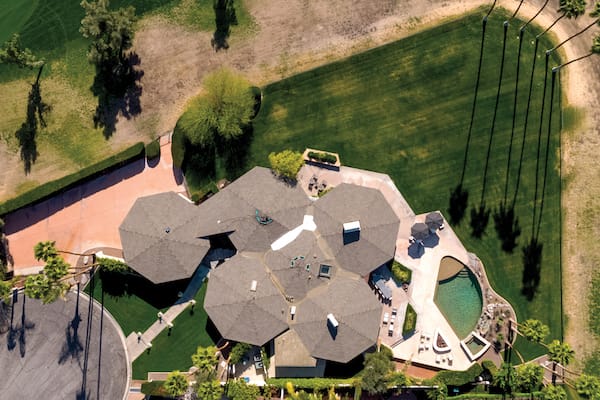 An overhead shot shows the five-pod system unique to this home.

The house is spectacular when you walk in, but you don’t see the view initially. It opens up as you move through and step down, and then it’s breathtaking. The architecture is stunningly strong and self-assured. While it’s dramatic in scale, it also lives very intimately.”

Davila adds that the house originally had a Polynesian sensibility. “Wooden outriggers with animal images extended from wooden towers centered on the octagonal pod roofs, themselves covered in white rock.”

While those elements were removed during a renovation, he points out that the entry courtyard, with its waterfall and pond, retains an island feel. Additional modifications to the 4,365-square-foot home include the removal of one of two pony walls in the main living area to improve flow, extensions to the kitchen and the master dressing room, and complete updates to the kitchen and bathrooms. 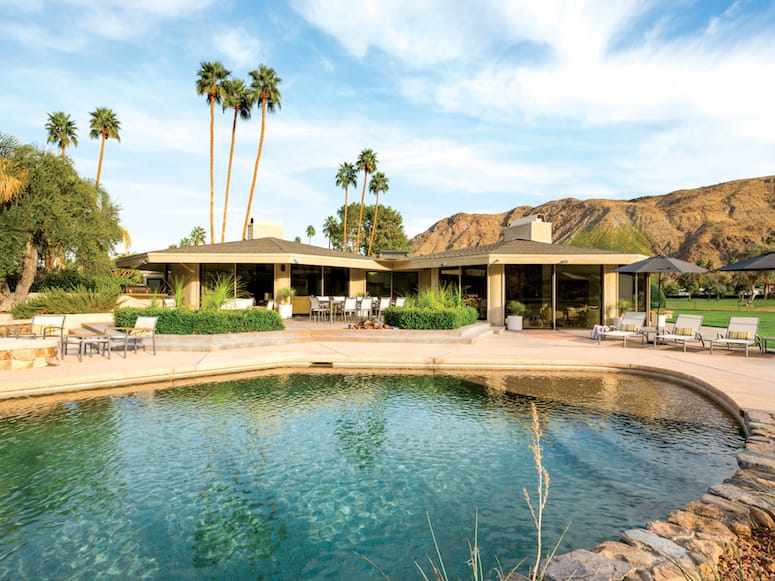 The property features a fan-shaped pool and views of the golf course and mountains.

The pond and waterfall set a serene mood as one approaches the home’s double set of glass doors; the tranquility offers a preview of the calm, Zen-like interiors, decorated in organic colors. “The furnishings and artwork are either very clean and contemporary, or are of the late 1960s, early 1970s era,” says Davila. Pieces by Milo Baughman, Eero Saarinen, Pierre Cardin, Harry Bertoia, George Nelson, Verner Panton, Charles and Ray Eames, and Warren Platner — available for purchase — are the perfect match for the high ceilings, dramatic angles, and sweeping views.

"The architecture is stunningly strong and self-assured. while it’s dramatic in scale, it also lives very intimately.”Tom Davila

From the pond, the formal entry has hallways leading to pods containing the master suite and secondary bedrooms/office. A central area houses the kitchen and leads to two other pods: one with the family room and a bedroom, and the largest pod, containing the living room, which features a towering, painted steel fireplace backed by a hand-forged rock wall that doubles as the focal point of a raised dining room. 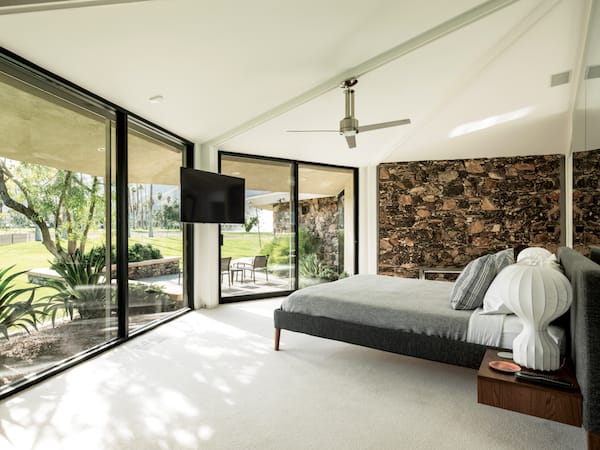 The stone wall of the front façade reappears throughout the house, including in the master bedroom.

A fifth pod contains a two-car garage. A casita — tucked between the guest pods and housing a bedroom, bathroom, and kitchenette — can be accessed from either the front or backyard.

The broad lawns in back open up to the golf course, with views of the Disney Fountain and the San Jacinto and Santa Rosa mountains. There are multiple lounging spaces, including one for dining, and a seating area off the master bedroom. The yard also features two gas fire pits and three original gas tiki torches, along with a waterfall and hot tub that flow into a pool with a Baja shelf.

The ever-expanding devotion to Krisel’s midcentury designs, which are being restored and reproduced throughout Palm Springs, is a testament to the enduring fascination with his work. Moreover, Krisel’s intuitive knack for innovative architecture that would stand the test of time is what makes this mid-20th-century house look and feel completely at home in the 21st century. 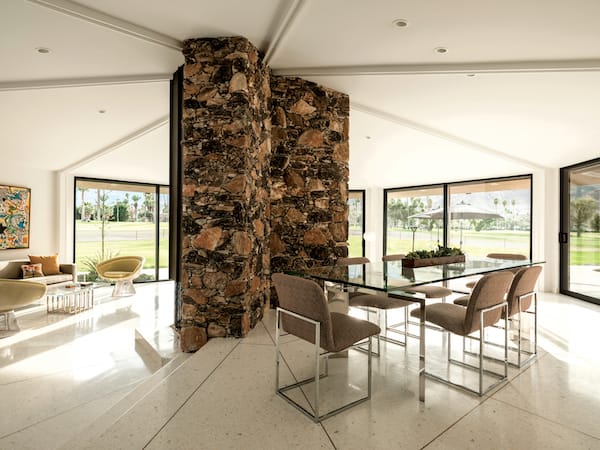