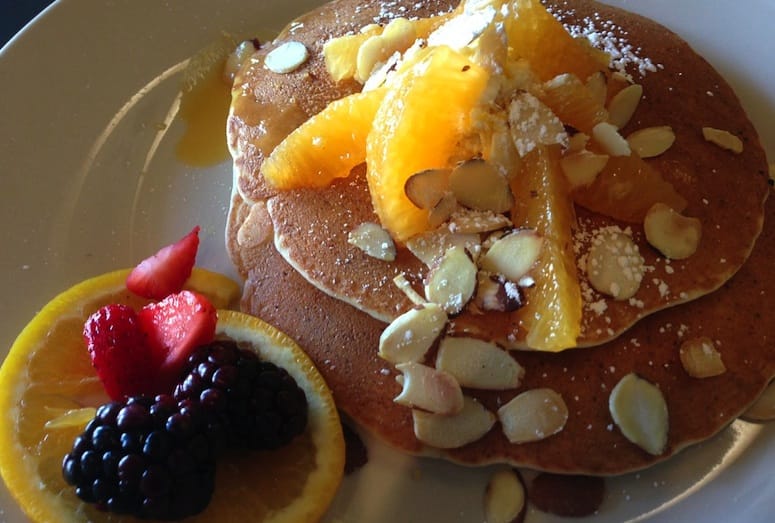 The Gardens on El Paseo has added a new type of restaurant to its sophisticated mix of mostly dinner houses.

Wilma & Frieda is named for owner Kelly McFall’s maternal and paternal grandmothers, both of whom inspired this innovative restaurateur with delicious memories of American home-style cuisine. But McFall has added with some modern tweaks and twists.

“All of the dishes are made with high quality ingredients; what makes them different is what we call a ‘crave-able factor,’” says McFall. “I’ve taken some of my grandmothers’ recipes and tweaked them a bit; taken them a step further.”

Similarly, the banana caramel French toast is topped with a scoop of sour cream, tasting more like cheesecake.

With the Sky’s the Limit, named for McFall’s young friend Skylar, who likes everything, you don’t have to limit your choices. Have it all: Three eggs any style, sausage and bacon, hash browns, a muffin or biscuit, and French toast or pancakes!

Benny’s Bennie – is an original Eggs benedict with Duroc pork atop house made English muffins with two poached eggs ladled with house made Hollandaise sauce.

“It’s the Old Amsterdam Gouda that has a taste you want again and again,” says McFall.

There is only one burger on the menu, but the patty is the real deal. It’s made from center cut ground chuck and short rib, making it juicy and flavorful. It’s served on an Amish bun with garlic aioli, lettuce and tomato. Customize the burger by adding bacon, avocado, and a choice of cheeses or caramelized onions for one or two dollars more per topping.

McFall credits Chef Chad Spears for achieving the over-the-top flavor combination.
“He worked at Roy’s Hawaiian Fusion for six years and prior was at Twenty6 at the La Quinta Resort,” says McFall.

Save Room for Dessert

Desserts are the handiwork of her catering manager, Todd Konkol, whose from-scratch creations include a luscious caramel pecan pie topped with fresh whipped cream drizzled with caramel; the huge peanut butter sandwich which are two cookies held together with a whipped peanut butter center. This may be dipped in chocolate, if you like.

A Bit of History

The idea for the café had been in the works for about 10 to 15 years, McCall says.
A regional manager for Peet’s Coffee in Northern California and then Southern California, McFall developed her “foodie” side by discovering many of the bay area’s artisan cheese and olive oils makers, bakers, and small farms growing specialty crops that are available in the farmer’s markets. The great wines of Napa and Sonoma Valleys also inspired her. She took cooking classes at the Culinary Institute of America’s Greystone campus in Napa.

“I have always had an appreciation for dining out and the creativity involved in serving memorable meals,” she says.

When her work brought her to Southern California, McFall says she found it didn’t matter where she lived and opted for Palm Desert.

“I began looking around for a restaurant,” she said.  “I knew I didn’t want to compete with the dinner houses which all do a great business.  But there was nothing around here for quality breakfast and lunch.”