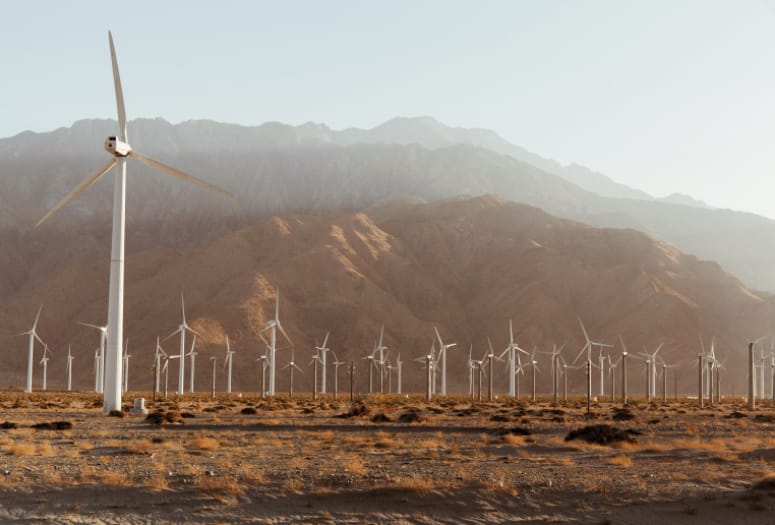 They generate only about10 percent of the Coachella Valley’s electricity, but the rows and rows of wind turbines — almost 2,000 of them along the Interstate 10 stretch known as the San Gorgonio Pass — offer a clear sign that you have arrived at a desert oasis and left behind the hustle and bustle of the city.

Soaring higher than 400 feet —about 37 stories tall — with blades swirling with a wingspan of 144 feet, the sentinel-like structures create a visual spectacle between the San Jacinto and San Gorgonio mountain ranges.

They’re one of the region’s most recognizable objects, admired for forward-thinking purpose and sleek beauty. That’s the conventional thinking. Presidential candidate Donald Trump articulated the unconventional in 2016, describing the windmill farm as “the worst thing you’ve ever seen,” on Herman Cain’s radio show. He added that the windmills made Palm Springs look like a “junkyard.”

Trump’s words might reflect sour grapes, as the now-president has a checkered past in the desert. In 2005, the Twenty-Nine Palms Band of Mission Indians terminated his management contract of Trump 29 casino; the tribe bought him out and rebranded the venue as Spotlight 29. Trump hasn’t been back since then.

Meanwhile, the turbines remain a fixture in the Coachella Valley, as they have for more than 30 years. You can even take a windmill farm tour, available from September to July, through Palm Springs Windmill Tours. The experience reveals the history of the turbines starting with the first one built in this country in 1888 by Charles F. Brush, who did so out of his need to power his house built outside the city limits of Cleveland.

The tour of the 250-acre wind farm reveals the power of these machines. Stand next to one of the taller versions, which reach 450 feet, and you can hear and feel the whoosh of the turning blades. These stalwarts will take over the wind farm as they replace smaller turbines, known by their latticework support, over the next 10 years. The new technology requires fewer turbines, reducing their footprint by up to 1,000 units.

The wind has to blow between 8 and 10 mph in order for the blades to begin turning, a reason they might be still when you drive by. Sometimes it’s too windy (over 55 mph) for the turbines to safely operate, and some machines are simply old, don’t operate, and haven’t been removed.

As you return to the tour’s main building, you’ll drive down Dillon Road, which borders the wind farm on the north side. In the 1860s the road was known as Villain Trail, the most popular east-west stagecoach trail running through the valley to Los Angeles. The reason wasn’t the wind, but water. A massive cool spring and oasis sat at the far end of the trail due to a big fissure that was opened by the San Andreas Fault, making it a perfect watering stop for the horses and passengers.