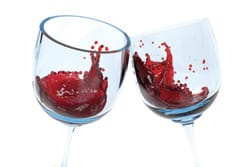 Dusty fruit sounds like something you’d want to avoid. Yet Paul Bologna, sommelier at Desert Springs JW Marriott Resort & Spa, sings its praises. Well, actually, he sings the praises of Oregon pinot noirs when he describes “dusty fruit” as part of the flavor profile that distinguishes Oregon pinot noirs from California pinot noirs.

Bologna has led multiple pinot noir “showdowns” in the desert as part of almost daily wine tastings at the Palm Desert resort. Fortunately, these showdowns are not held at high noon, and they’re ultimately quite civilized, taking place on the lobby boat dock.

“People who really like wines eventually gravitate toward pinot noir because it’s like a holy grail type of wine in terms of flavors and the way it differs,” says winemaker Michael Michaud.

The benchmark for the wine is Burgundy, France, where terroir (particularly in minerality) is vividly pronounced in pinot noir. Many California winemakers “make these really ripe wine styles that overshadow the characteristics of the place,” Michaud says.

Although the difference between Oregon and California pinot noirs is a complex issue because of the numerous microclimates in the latter state, Michaud and Alex Sokol Blosser, co-president of Sokol Blosser Winery, agree with Bologna that Oregon pinot noirs tend to be more acidic and earthy than their southern counterparts.

“They are more European in character,” Michaud says, noting that Oregon lies at the same latitude as Burgundy and thus shares its later growing/harvesting season.

Sokol Blosser refers to the “pinot noir continuum.” At one end is red Burgundy, with earthy notes, elegance, and great acidity. At the other end is the more fruit-forward pinot noir of California. Oregon falls midway between the two, Sokol Blosser says. Due to the grape’s feisty nature, he adds, “there’s no economy of scale for pinot noir. You have got to be passionate about it.”

Although California has more acres planted in pinot noir, the grape ranks fourth in acreage (behind cabernet sauvignon, merlot, and zinfandel). In Oregon, more than half of the state’s vineyard acreage is planted to pinot noir (about three times more than runner-up pinot gris and about 10 times more than chardonnay and Riesling). What remains consistent, whether you’re talking about France, Oregon, California, or even New Zealand (which Bologna calls the “rising star with pinot noir”) is that pinot noirs, with rare exception, are 100 percent pinot noir bottlings.

“It’s 100 percent because the benchmark for great pinot noir comes from Burgundy, where they’ve been making it for centuries, and they’ve always made it 100 percent,” Bologna says. Even in the West, some old rules are followed. Don’t overlook your options. Give both California and Oregon pinot noirs a shot.

For an online exclusive on varietal-specific wine glasses, including one for Oregon pinot noir click here.