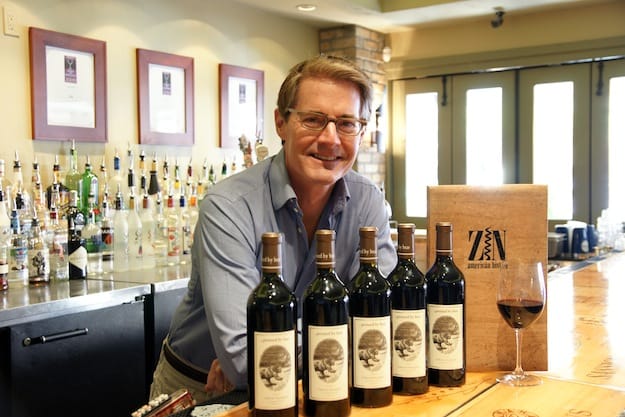 Kyle MacLachlan has a second job.

The actor is best known for movies like “Dune” and “Blue Velvet”, and appearances in TV series like “Twin Peaks”, "Sex and the City" and “Desperate Housewives”. On Tuesday, however, he was playing the part of traveling salesman.

While this was a business trip, MacLachlan’s good looks and engaging charm let you know that while winemaking may not be his first priority, he takes it just as seriously and personally as he does getting in front of the camera.

“After you have the romance of becoming the winemaker and designing the label and all of that, the nitty gritty sets in,” MacLachlan said. “Fortunately I love it. I love people, love talking about wine, love meeting the people, so it all suits my lifestyle.”

MacLachlan, who turns 54 in February, forged his way into the wine market in 2005, returning to his Yakima, Wash., roots to create a brand with the help of Eric Dunham of Dunham Cellars in Walla Walla, Wash.

He is testing the old adage that you can’t go home again. MacLachlan is doing it anyway, discovering a whole new connection he never imagined.

“You can go home again, but you have to find something new,” he said. “I found a new reason to go home.”

Palm Springs Life.com asked MacLachlan about his wine and what’s new with his acting career during his stopover.

Have you been in Palm Springs before?
“I have been here a couple of times to play in what was the Bob Hope Classic. I wasn’t able to play this year. I was at the Sundance Film Festival last weekend for a film and wasn’t able to play.”

What film were you promoting?
“I’m in a film called 'Breathe In', a very brief appearance. I like the director, Drake Dormus. We had the same representation. He knew I was living in New York at the time where they were going to film. So I played part of a couple (with Amy Ryan) that interacts with the two leads in the film, Guy Pearce and Felicity Jones.”

You starred in a TV pilot last fall, “Made in Jersey”, which was canceled. What other TV projects are you currently involved in?
“I was really at Sundance to promote “Portlandia” on the IFC Channel. I’m the mayor of Portlandia, and get in a few episodes every season. I’ll be on “The Good Wife” in the next couple of weeks, and I have a commitment for “How I Met Your Mother”. I  will reprise the role of the Captain, which is quite a character. Then the season for new pilot starts, and I’ll be looking for something to do for the fall that will be picked up.”

Who was instrumental in turning you onto wine?
“I came to audition for “Dune”, which is my first film for director David Lynch. I screen tested, and after that I went back to the hotel and there was a bottle of Lynch-Bage there from David. This would have been early 1983. I never had French wine before. It was spectacular bottle of wine. I ended up getting the role in "Dune", and my and David’s appreciation for wine grew from there. We drank a lot of red wine as we made the movie. We trade bottles of wine back and forth. It’s a fun thing that cemented our relationship.”

When did you go from wine connoisseur to wine owner?
“Living in Los Angeles, I would go to Napa to explore and have a little holiday. I met Ann Colgin from Colgin Cellars, and her story was instrumental in influencing me. She started winemaker Helen Turley, and she was making wine at a co-operative facility before she had her own setup. Her story sounded like she approached it in a very smart way, and I thought it’s really possible to do this. My leap started with Eric Dunham. He’s a great guy and we hit it off, and I asked him one day if I could partner with him on a small winemaking project. It really started from a chance meeting with him, drinking his wines, contacting him and liking him as a person. I was actually looking for his 1999 Syrah to serve at my wedding reception and he didn’t have it, but he was very helpful and pointed me in the right direction.”

What did you look for in a wine when you were a consumer, and what did you take from that when it came to making your own?
“You have to go with what the region gives you. Washington is very distinct from Napa. I love a Washington cabernet, too. It has a very strong fruit, berry component – blackberry, blueberry flavors. The biggest distinction is an acid condition, a brightness that is really there in Washington wines. You can hang your fruit on your structure. It’s up to you whether you push the fruit or the structure. I like a Boudreaux style, very balanced, that can work with food. I was not interested in something that is so fruit dominant that it overwhelms you.”

Did any part of this journey surprise you?
“I was surprised from Day One. When everything came in and I was there for the fermentation. Eric fermented the grapes in these small steel containers. If you were to put your head down inside these bins, and not like you’re covered in the berries but then tried to breath, there is no oxygen. You realize the process of the CO2 coming off of that fermentation is really so weird. I pulled my head back up and said that’s crazy, there was no air in there at all. The tastings as the wine stays in the barrel – 3 months, 6 months, 9 months – and how it starts out not even palatable, and how the oak softens and the blending of the oak and wine, what happens inside is pretty incredible. Even then it’s not ready. It takes another year in the bottle before it. The journey is longer than I expected.”