Wine & Music Series at the Gardens on El Paseo 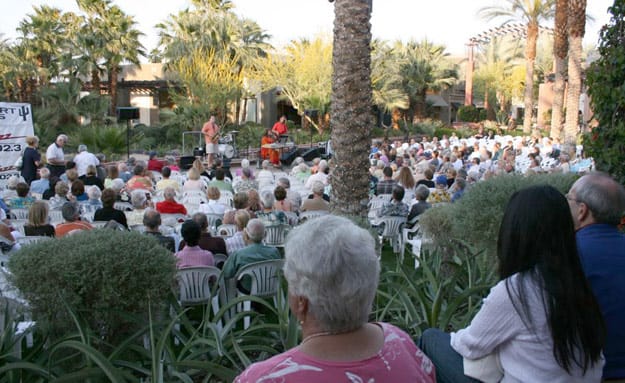 The Gardens on El Paseo in partnership with Fidelity Investments as presenting sponsor will begin its popular Wine and Music Series January 30th continuing every Saturday through April 17th. The concerts at The Gardens on El Paseo have raised more than $600,000 for local charities since the series premiere in 1998 and are a favorite annual event for residents and visitors alike.

The wine and cheese reception held on the center lawn before each concert begins at 5:15 pm immediately followed by a one hour concert concluding at 7pm. The concerts are produced by KJJZ’s Jim “Fitz” Fitzgerald and feature talented artists performing music ranging from jazz and pop to rock’n roll and funk.

The Gardens on El Paseo is located at 73-545 El Paseo, Palm Desert, 92260. www.thegardensonelpaseo.com