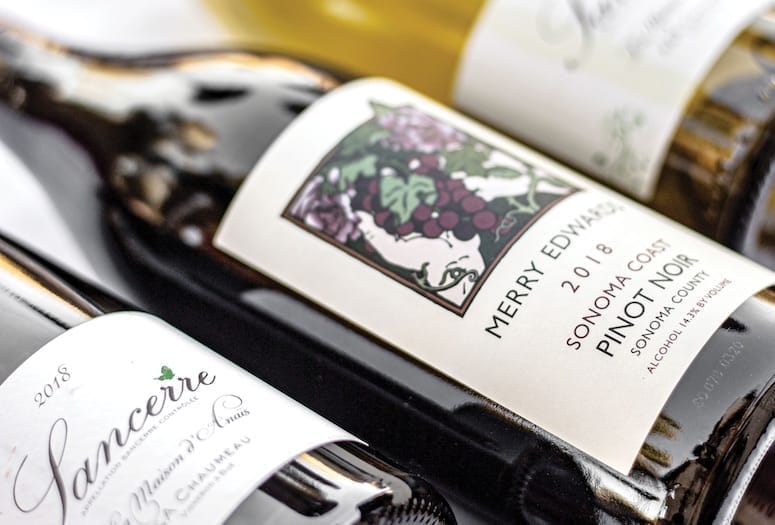 At Cuistot restaurant in Palm Desert, wine recommendations include the Domaine Joseph-Drouhin Chablis chardonnay (left), and a pair of French and California reds.
PHOTOGRAPHY BY MOLLIE KIMBERLING

Ahhh, spring. It’s not that we needed an excuse to pour a glass of wine and make a toast, but the pristine weather practically begs you to share a bottle among friends. On the hunt for the good stuff, we asked three Coachella Valley oenophiles what they look forward to pouring this season.

To complement the restaurant’s classic French menu, Chaabi has curated a moderately priced wine list that is about 50 percent French. The selections are primarily from smaller growers, with whom he has personal relationships, that diners may never have tried — or even heard of.

Chaumeau La Maison d’Anaïs Sancerre Rouge, Loire, France, 2019 ($80): “Burgundy wines are some of my favorites, and I always loved pinot noir from Sancerre, which many people don’t know about because sauvignon blanc is about 80 percent of what is produced in Sancerre. Sancerre Rouge is 100 percent pinot noir. It’s excellent. It can really spread its wings between all types of food, and you can chill these, too.” 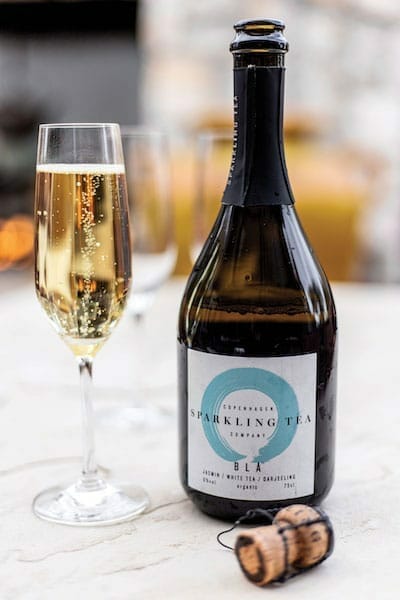 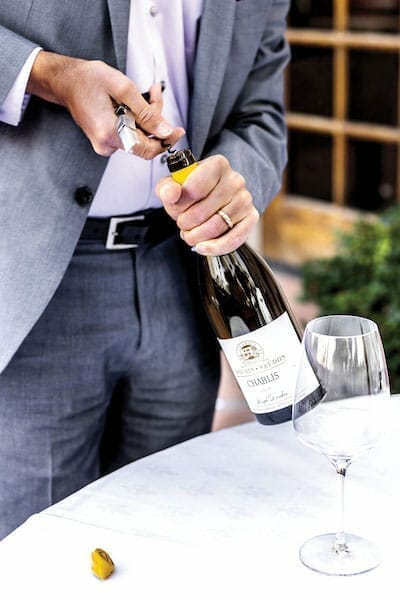 Copenhagen Sparkling Tea Company Lyserød, Copenhagen, Denmark: “I’ll be the first one in the valley to introduce this. I was reading an article in a British newspaper about the store Harrod’s. They were serving this, so I contacted the company that makes it and got samples. It [is made with] silver needle, oolong, and hibiscus, and it’s organic. When you see it, you think it’s a sparkling rosé. [However], it has no alcohol, so if someone doesn’t drink, it will be a great option.”

The misunderstood wine he wants you to try:

Domaine Joseph-Drouhin Chablis, Burgundy, France, 2020 ($70): “Chablis is a village in Burgundy, and the wine is synonymous with chardonnay. This one is 100 percent chardonnay, stainless. There’s no oak at all. It’s clean; you get just the fruit. When I pour the wine and people ask me what it is, I say, ‘Please try it.’ I want the wine to talk to you instead of me talking over the wine, because if the wine is good, I don’t have to talk much.”

Two California reds that gives his French favorites a run for their money:

Merry Edwards Pinot Noir, Sonoma, 2018 ($110) and Merry Edwards Coopersmith, Russian River Valley, 2017 ($135): “I work with Merry Edwards, and I love what they do. When she started [more than 40 years ago], no one believed in her. Her way of making pinot noir is to emulate red Burgundy. The Sonoma coast pinot noir wine is silky, while the Russian River is velvety. Those nuances are defined by terroir — the soils where they are grown, the exposure, the topography, the amount of water they get. Think of tomatoes. They come in different styles and tastes. The same applies to wine.” 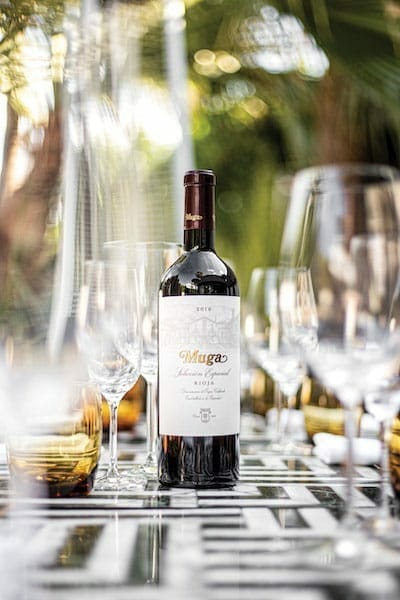 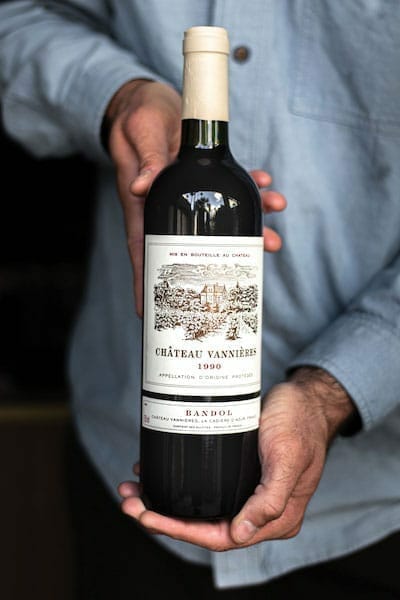 The Selección Especial Bodegas Muga is among the Spanish reds  on Patrick Baker’s list at Mr. Lyons Steakhouse. He’s most excited to introduce diners to the elegant Château Vannières Bandol Rouge.

Old World meets New World with a focus on small producers that Baker discovers through boutique distributors and importers. He’s well-versed in their backstories and enjoys sharing those lesser-known details with his customers.

Château Vannières Bandol Rouge, Provence, France, 1990 ($40/glass, $155/bottle): “One of my importers’ wineries in Bandol [an appellation of Provence] found a pallet of this wine from 1990 that we just put on by the glass and bottle. It’s unique, and it’s not anywhere else in the desert. Château Vannières blends are typically 90 percent Mourvèdre, so it has this elegance and this nice spice and tannin, and not only allows the wine to age for 30, 40, 50 years but also holds up its backbone as the wine ages.”

An Austrian grüner veltliner and a Spanish albariño: “I’m looking at doing both by the glass. A grüner is great for spring, and it really holds up well to steakhouse fare. The albariño [is] a light, fun white wine that’s really drinkable, as opposed to just having a standard pinot grigio on the list.”

A renewed interest in Old World reds: “Especially as we’ve brought on second-, third-, and fourth-growth Bordeaux, they have been doing extremely well. I have three or four Spanish reds on the list, and our guests and our staff really love them.”

Selección Especial Bodegas Muga, Rioja, Spain, 2016 ($110) and Señorío de Cuzcurrita, Rioja Alta, Spain, 2017 ($90): “We’ve had the Señorío on our list for a few years, but it was sort of a slow mover until the past two or three months. I think there’s a little bit of palate fatigue for big cabernets at a steakhouse. It might be the influence of people moving here from other cities like San Francisco and L.A. who are used to seeing more Spanish wines. There’s more openness now.” 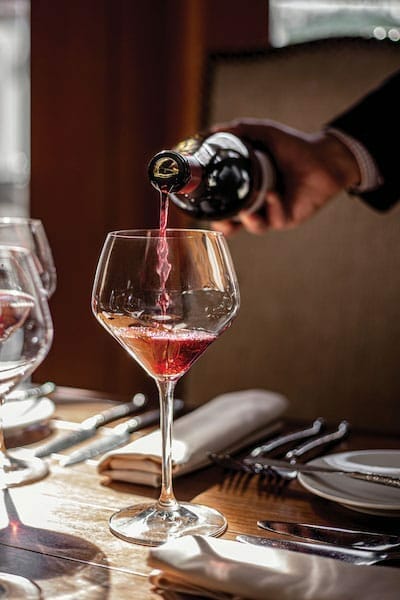 Heavy on approachable but high-quality domestic wines, the menu offers a mix of familiar favorites that regular guests expect alongside new additions from lesser-known producers.

“If you purchase a bottle of Dominus, it can be crazy expensive — $300 to $400 — but Napanook is $155. It’s the second label of Dominus, and to me it’s as good as the original. The winemaker of Napanook is French, and he is the former winemaker for Château Pétrus in France. If you purchase a bottle of Pétrus, it can cost $8,000 to $10,000. So there is a story to tell about this wine, and our customers really love it.”

The fun concept for spring:

Lots of rosé: “This year, my goal is to do rosé all day, but I’m going to add a different perspective. Instead of having a rosé from only the United States and from Europe, I want to create a list of rosés from all over the world. Where would you like to travel tonight? Would you like to go to South Africa, Australia, Argentina? We’ll be able to explore.”

The bubbly he wants you to try right now:

Canard-Duchêne Brut Champagne, Reims, France, NV ($95): “This champagne is absolutely amazing. I recommend it because it has a great value for the quality of the product. People have a tendency to choose a generic brand they know that has huge a marketing budget behind it, but small producers like this one, I believe can be even better.” 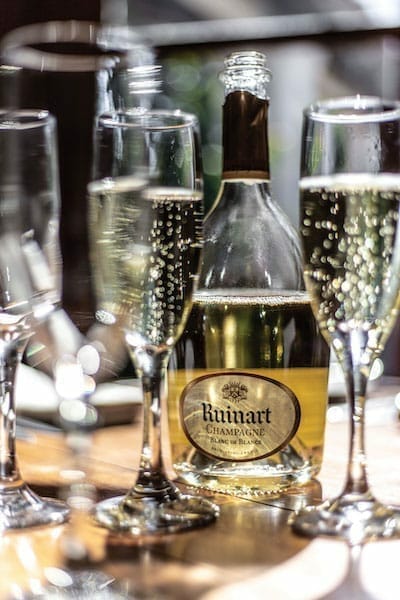 At Morgan's in the desert, Fabien Riviere recommends the Canard-Duchêne Brut Champagne, a vakue at $95.

The bottle to please everyone at the table:

Kistler Pinot Noir, Sonoma, California, 2019 ($139): “If I have a party of 20 and they want one red, and some of the guests are having fish and some pork and some steak, I’m going to go with a very heavy pinot noir so we have a balance that can accommodate all of the dishes instead of going with a merlot or Meritage or a cabernet. My favorite pinot noir is, by far, Kistler.”

• READ NEXT: Bar Cecil in Palm Springs Offers $50 Martini, and It's No Gimmick.