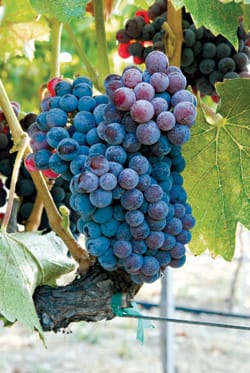 Chardonnay, cabernet sauvignon, zinfandel, and merlot (in that order) cluster at the top of the heap when weighing the tons of grapes crushed in California. While syrah makes an impressive showing in the California Department of Food and Agriculture’s 2007 crop report with 126,945 tons crushed, that’s less than half of the state’s crushed merlot.

In February, the Rhone Rangers — a California-based organization of wineries, growers, distributors, and other Rhône grape supporters — held a seminar and wine tasting in Paso Robles to shed light on and instill greater appreciation for grapes with their origins on the Alps side of France.

“I planted the first syrah in California since the repeal of Prohibition,” claims Gary Eberle, founder and owner of Eberle Winery in Paso Robles. With a clone from the Rhône vineyards of Michel Chapoutier, Eberle introduced syrah to California in 1974 and in 1978 released the country’s first 100 percent syrah. He recalls Christian Brothers previously producing a blend of zinfandel, petite sirah, syrah, and carignane for one or two years, but says the rootstock was diseased and the blend discontinued.

There are more than 20 Rhône varietals (equally distributed between red and white grapes), compared to seven Bordeaux varietals, and one is not even grown in the Rhône Valley.

“Petite sirah is only recognized as a Rhône varietal in California,” says Jason Haas, general manager of Tablas Creek Vineyard in Paso Robles. “You would never find it in the Rhône Valley.” According to Haas, the Rhone Rangers voted to count petite sirah as an Rhône varietal because many of the wineries growing Rhône grapes also grow petite sirah. While its origins are murky, DNA research at the University of California at Davis in 1997 traced its lineage to syrah.

While wineries such as Tablas Creek are bottling single Rhône varietals, even more are making Rhône blends — and that’s what consumers are more likely to find in their local wine shops. Eberle Winery’s Côtes-du-Rôbles is a blend of mourvèdre, syrah, grenache, and viognier. Robert Hall Winery makes a white blend called Blanc de Robles that includes roussanne, grenache blanc, and picpoul blanc.

One of the staunchest supporters of Rhône-style wines, Tablas Creek was founded in the hilly west side of Paso Robles. There the soils, terrain, and climate mimic the Châteauneuf-du-Pape appellation in Rhône Valley, where the Perrin family partners of Tablas Creek own the Château de Beaucastel winery. Tablas Creek’s Esprit de Beaucastel Blanc blends roussanne, grenache blanc, and the late-harvesting picpoul blanc. Its signature red, Esprit de Beaucastel (its best-selling wine), blends syrah, grenache, counoise, and the even-later-harvesting mourvèdre. In exceptional vintages, the winery produces a mourvèdre-based cuvée; the 2005 Panoplie comprised 70 percent mourvèdre, 25 percent grenache, and 5 percent syrah.Tablas Creek offers a 100 percent picpoul blanc (French for “white lip stinger”) with roasted pear and spice in the nose and tasting characteristics of pineapple and orange, with a lingering piña colada finish. The winery also makes white and red dessert wines from, respectively, 100 percent roussanne and 100 percent mourvèdre.

During the 2002 and 2005 vintages, Tablas Creek bottled a limited amount of 100 percent counoise, due to harvests that exceeded the amount of grapes needed for blending. The accomplishment is noteworthy for more than bountiful harvests. In 1990, the winery had purchased counoise cuttings from Château de Beaucastel. When they were released from USDA quarantine three years later, Tablas Creek began the grafting process. The grafting was easy compared to the two-year process of getting approval to list the varietal on its labels. The winery first had to prove the legitimacy of the counoise grape to the Bureau of Alcohol, Tobacco, and Firearms through submission of materials in French and English.

“I think there’s more knowledge in Rhône varietals than there was even five years ago,” Haas says. “It used to be people would know syrah, but that was about it. Now people know more individual grapes.” He attributes this to a growing legion of Rhône-grape wine producers who are educating people one at a time in their tasting rooms and through wine dinners.

In the Tablas Creek tasting room, visitors with an affinity for chardonnay are steered toward roussanne. “It has some similarities [with chardonnay] in feel, richness in the mouth, and structure that allows it to be aged in oak,” Haas says. “The average roussanne in California — and that seems funny to even say — is oaky.”

The Rhône gateway for cabernet lovers is syrah. “It has the same kind of structure components,” Haas says. “It has good, strong tannins on the back; spicy notes; and good, dark fruit.”

“These grapes have a lot of champions in the industry — writers and sommeliers,” Haas says. “Robert Parker has been a huge proponent of Rhône grapes, both from France and California, Australia, and Spain. So a lot of collectors who have been brought into the world of fine wines have started to welcome the family of Rhône varietals following Parker’s enthusiasm for them.”

Eberle particularly loves syrahs. “I think they really do express their terroir as much or more than any other red grapes I have worked with,” he says. “It’s hard not to like syrah and grenache and viognier. You get them in your mouth and that explosion of fruit really goes a long way.”