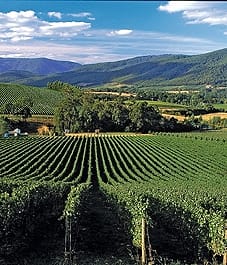 Winemakers and wine drinkers have long appreciated the marriage of complementary red varietals into an elegant blend (Bordeaux leap to mind). A growing number of Australian vintners have taken what at first blush seems an incongruous step by blending a white varietal grape (viognier) into a red varietal (shiraz). In 2001, Australia shipped 963 cases of shiraz-viognier to the United States. That number catapulted to 69,975 cases in just the first three quarters of 2007.

What viognier and shiraz (the Australian name for syrah) share in common is their origin as Rhône varietals. It was in the Côte-Rôtie district in France where winemakers first blended these seemingly disparate grapes.

“In the northern Rhone Valley, it has been done for more than 500 years,” says Michel Chapoutier, a French winemaker who has partnered with American winemaker Tony Terlato to create Terlato-Chapoutier Shiraz-Viognier in the Pyrenees Hills of Victoria, Australia.

“The viognier-syrah blend is historical. The grapes were grown in the same ‘neighborhood’ in France, and blending them became a tradition,” Chapoutier says, adding that he and Terlato chose to follow that tradition four years ago. Ninety percent of their joint production is shiraz-viognier and 10 percent single-vineyard shiraz.

One reason these grapes ended up together is because they ripen at the same time and, according to Roger Boulton of the Department of Viticulture and Enology at University of California-Davis, it was a matter of some serendipity.

“It wasn’t a stroke of scientific discovery. I think it was just accidental and then it became more empirical,” Boulton says. “In history, people would have had mixed plantings. It’s only recently where people think that purity is better. That’s a very New World kind of view.”

“As a country, we have made shiraz historically from the warmer regions,” says Steve Flemstead, winemaker for Innocent Bystander in Australia’s Yarra Valley. “There are, however, a number of smaller producers who have always been passionate about shiraz from the cooler regions [Pyrenees, Yarra Valley, Canberra, etc.]. Shiraz from a cooler climate acts almost like a different variety — spicy and peppery rather than plummy and jammy. We have looked to the wines of the Rhone Valley in France as benchmarks, and it is here we have seen the results of blending the two varieties.”

“The co-fermentation of the two grapes enhances color stability and produces a softer, more approachable wine when young,” says Barry Kooij, winemaker for Arrowfield in Hunter Valley. “I have co-fermented with different white varieties with the same results, but what makes viognier the preferred variety is the added aroma and flavor profile it gives the wine. The viognier flavors complement and lift the shiraz flavors better than any other variety.”

“In warmer climates like the Riverland in Australia, shiraz can sometimes lack fragrance, whereas viognier seems to keep its perfume, so the finished product seems prettier and therefore more approachable,” says Ben Riggs, who produces the blend for Zonte’s Footstep, The Black Chook, and the aptly named Mr. Riggs. “Regarding the cooler climates, shiraz can be a little tougher and more angular, so the viognier juiciness can add sweetness of fruit as well as softer, sweeter tannin.”

As unintuitive as it may sound, adding viognier — whose skin ranges from gray-pink to green — deepens the red/purple hues in shiraz, due to a series of colorless compounds, explains Boulton, who has a background in fermentation and chemical engineering.

“When we set out to make a cool-climate shiraz, we had tasted a lot of Côte-Rôties and realized the positive influence of small additions of viognier to the ferments,” Flemstead says. “The most important benefit is the effect on the aroma, accentuating the black and white pepper spice and adding a small degree of stone fruit to the wine. The second is the effect on palate weight. We are seeking a juiciness to the palate of our shiraz-viognier, and the viognier tannins have a velvety effect on the mouth feel. The third effect is to accentuate the red hue of the wine. The viognier tannins, when co-fermented with shiraz, actually lock in and make more stable the red color pigments.”

“We have done some trials on co-fermenting marsanne with shiraz with promising results. It is a more neutral grape variety than viognier,” Kooij says. “It gives the same structural benefits without influencing the flavor profile as much. Therefore, we plan to experiment with marsanne, using it in merlot and cabernet, as we don’t want to alter the flavor profiles significantly in these varieties.”

As with any wine, vintners choose their own formula, but the percentage of viognier added to shiraz falls within the 2 to 10 percent range (5 percent is typical).

“A little goes a long way,” Kooij says. “The viognier flavors dominate the wine at higher percentages and throw the wine out of balance.”

“I equate it a little like adding garlic to a great, savory dish. It is very strong, and too much will destroy the positive effect,” Flemstead agrees. “Too much viognier will make the wine ‘apricoty’ and almost ‘tropical’ on the palate.”

More difficult to explain than the chemistry is why American winemakers haven’t embraced the shiraz (syrah)-viognier blend.

“This country is incredibly conservative,” says Boulton, a native Australian. “There is a very strong attitude in the market sector of the wine industry here that they think they know everything. Their thinking is, ‘This is what we make; you should drink it.’ Heaven forbid they would … consider an alternative. That would require an open-mindedness that you typically don’t see.”

“Australians are by nature quite brave/foolhardy and love having a dip at things,” Riggs theorizes.

Brad Rey, who simply calls himself “one of the brethren” at Zonte’s Footstep, credits Clonakilla in the Canberra District as the first Australian winery to gain recognition for shiraz-viognier. After winemaker Tim Kirk sampled syrah-viognier on a trip to the Rhone Valley in 1991, Clonakilla began adding viognier to its shiraz — its first release being 1992. (Clonakilla’s blend was named New South Wales Wine of the Year in 1999.) “This wine has reached cult status and is quite expensive [$70/bottle Australian],” says Rey, adding that another winery, Gemtree Vineyards in McLaren Vale, has produced a shiraz with chardonnay skins.

“We focus at Zonte’s Footstep to bring new and exciting blends and varieties to consumers at a price point that all can afford to explore the wonderful world of wine,” Rey says. “Our aim is to make wine true to vineyard, so long as we make a bloody good drink.”