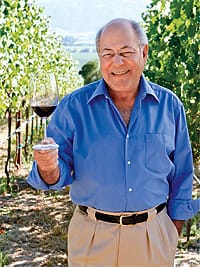 Standing in the kitchen of his Indian Wells home wearing an apron and preparing pasta alla rustica for lunch, Anthony Terlato says something that sounds odd coming from a winery owner.

“You can’t make great wine in a hundred years,” says the chairman of the Chicago-based Terlato Wine Group, which owns and partners with multiple wineries in California and abroad and imports from Europe, Australia, Argentina, South Africa, New Zealand, and Canada. One of every eight bottles of wine sold for more than $14 comes from the Terlato portfolio of about 50 labels.

Listen to Terlato for a bit, however, and you understand his point. You also realize that he sets a high bar for greatness. In November-December 2007, 94 wines in Terlato’s global portfolio earned 90 or more points from Robert Parker, Stephen Tanzer, and Wine Spectator.

Terlato began his career working in his father’s grocery/liquor store on Chicago’s north side and then joined his father-in-law, Anthony Paterno, at Pacific Wine Co. (subsequently Paterno Imports), the first Illinois distributor for Lancers, an inexpensive Portuguese rosé bottled in opaque burgundy crocks.

“I could get 200 cases if I took 600 cases of Lancers,” he recalls. When his father-in-law inquired about his success in obtaining the French wine, “He said the same thing I said: ‘Are you crazy?’” However, Lancers was a moneymaker. “It is easy to say, it is easy to drink, and it is not expensive,” Terlato theorized. “That was the beginning. We sold Blue Nun, Lancers, and Mateus. We had a really great position in restaurants.”

Still wanting to build the business on higher-end wines, Terlato set up a company kitchen and dining room.

“I would go in the stores, open a bottle of Château Lafite, and [the wine buyer] is answering the phones, clerks are interrupting, deliveries are coming in. You can’t sell expensive wines if you don’t have their total attention.” So Terlato started inviting clients to his headquarters, where he served his captive audience prosciutto, bread, and cheese.

“Then we were breaded and cheesed out, so I put in a little stove to make pasta,” he recalls. “[Later] I put in a grill and made steaks. After a while, we were doing it four times a week. So we got a woman to work from 12 to 3 five days a week.” He even sent a limo to pick up wine buyers.

After a 1959 trip to the Barolo district in Italy, Terlato decided to become “the most important distributor of Italian wine in America.” He continued his sojourns in Italy, adding more wineries to the Paterno portfolio. On a 1979 visit, he ordered a bottle of every pinot grigio on a restaurant’s wine list. Among the 18, he singled out Santa Margherita, which has remained a top-selling import for Terlato Wine Group.

Terlato is working on a book about his experiences in the wine industry with cookbook author Joan Reardon. “She said, ‘Give me somethings you have not succeeded at,’ and I said, ‘Golf.’ I have just been very, very lucky.”

When considering acquisitions, Terlato seeks specific varietals. “When we bought Rutherford Hill, it was for the merlot,” he explains. “Chimney Rock because the cabernet sauvignon they did was so important. Sanford, of course, was for pinot noir. Alderbrook was for zinfandel and syrah and pinot noir. … It’s like a painter’s palette. How do we fit into a restaurant? I don’t need to have 10 cabernets.”

When Terlato purchased Rutherford Hill, the winery had “some issues,” Terlato says. “I made Wine Spectator covers that said, ‘Rutherford Hill makes the best merlot in Napa Valley.’ The head of every department had to hang it in their de-partment. … This was 1996. I said [to the department heads], ‘Look at the date in the upper right-hand corner.’ It was 2002. I said, ‘That’s where I want to be. That’s where I expect you to get me.’”

Then Terlato did something even more radical. He removed 14,000 cases from the lot. “The financial people said to me, ‘Are you crazy — to spend all this money on a winery and you take out 14,000 cases?’” Terlato’s response: “You can’t continue to make mediocre wines and make wines that will be considered important.

Château Latour never makes bad wine, he explains, because if they have an inferior vintage, they make two cases instead of 10. “Latour and Beychevelle in off vintages still can make wines that are quite good, but they give up 80 percent,” he says.

His Rutherford Hill gamble paid off. The first vintage of Terlato-made Rutherford Hill merlot (1996) sold out; it was also the first time the winery received a 90-point rating from wine journalists.

Although Terlato has put his stamp on winemaking at the wineries he owns, he wanted a label with the family name that would capitalize on premier viticultural areas. But, again, Terlato bucked the trend. Where the Russian River Valley is famous for its pinot noirs, he made pinot grigio. Terlato Family Vineyards also makes a Chablis-style chardonnay from the Russian River, a syrah from Dry Creek Valley, and four Bordeaux blends from Napa Valley: Angels’ Peak, Devils’ Peak, Cardinals’ Peak (introduced in March), and Episode (the winery’s “pinnacle wine”).

In addition to recent joint ventures in Samantano, Spain (“a new viticultural area that I think in the next 10 years you will be reading about,” Terlato says), Argentina, and Italy — a tempranillo, malbec, and sangiovese, respectively — Terlato plans to grow his business 17 percent a year and continue the climb to “greatness.”

“You have to make a lot of vintages, and it has to be global — that’s when you can claim it,” Terlato says. “One hundred years from now, I expect that [our wines] will be great. … I have to start with good.”