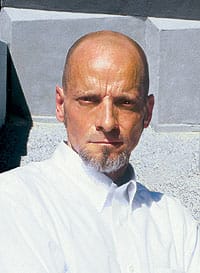 While Lowe claims he’s unqualified to discuss a wide variety of common topics because he doesn’t follow sports or watch television, he knows the most insular details about the lives of Burroughs, whom he knew well, and Lautner, whom he never met. He even knows stories about the Utopianist younger brother of Hollywood producer Lucien Hubbard (The Perils of Pauline, Wings), who commissioned Lautner to build the desert retreat he has turned into Desert Hot Springs Motel.

Lowe calls the motel an interpretive site and educational retreat. Guests can peruse architectural books featuring Lautner’s work. They can watch a Lautner video on a replica 1947 television (the year the retreat was built). Or they can just relax in the wash of light created by skyward-facing clerestory windows along the west wall and a glass wall that opens to a private, raised garden wrapped around the opposite side of the room. Period furnishings include refurbished, heavy, black Western Electric telephones. “I found a man in North Carolina who had the original stamping machine for the dial-face numbers,” Lowe says. It’s the sort of detail on which he thrives.

Desert Hot Springs Motel’s relatively isolated location amid raw desert and low-lying mountains brings to mind a garrison. Julius Shulman, who was hired by Lautner and other notable modernist architects to photograph their work, told Lowe that “the locals” in 1947 thought the building was a secret government project.

It’s little wonder. Hiding glass walls and gardens, the concrete-and-redwood exterior belies the airy, light-filled space inside. For his first foray into concrete structures, Lautner used Gunite (sprayed concrete used for swimming pools) in the slanted roofs, which are supported by steel I-beams. As the only non-neutral element in the cream-painted hotel, the orange beams peak inside the rooms where the clerestory windows fill the gap between wall and ceiling.

Lautner’s decision to use concrete came from a sleepless night in a Palm Springs motel. “I stayed in a typical motel. And it’s very windy, and the buildings just rattle and scream — it’s terrible,” he explained in a 1982 UCLA oral history interview. “So I got the clue right away that for that environment I use steel and concrete.”

The architect was pleased not only with the resulting silence, but also with his innovative design on the whole. However, he told the UCLA interviewer, “[T]he strange part is that the, you know, big-business developers, they never see anything like that. I mean, these are real contributions to every kind of project, but they’re unnoticed, don’t make any difference.”

They make a difference to Lowe. Before opening the motel in 2000, he visited the Lautner archives in Los Angeles, met with Shulman, and researched Hubbard and the history of the building. “In 10th grade, I did a paper on Tibetan tacos, though I had never had one,” Lowe says in explaining the drive that is part of his moral fabric. “I have a responsibility. I am part of the history, of keeping this story alive. That’s why the details are important to me, because it all matters. They’re all the threads that create the tapestry.”

Judy Lautner was only 3 years old when her father built Hubbard’s retreat and, though she worked with her father for seven years in the 1970s, only saw it for the first time a few years ago. “When I first saw it, I was really delighted at the privacy and the openness,” she says. “And I noticed how he had raised [the gardens] to a higher level that added something that wouldn’t have been there. And, frankly, all these little details are consistent with the way that he thought things out. Every single thing he did was different from everything else.”

Lautner had reservations when Lowe first told her he had purchased the property and planned to put in period furnishings. “[My father] was always ready to move on and bring things up to the current day,” she says. “He wasn’t interested in seeing things stuck in time.” The results surprised her. “I was so very delighted to see that it was a really beautiful place, and the furniture fits,” she says. “I think he brought it to the point that my father would have just been delighted to see.” Having stayed at Desert Hot Springs Motel a few times, Lautner says it has the warm and welcoming feeling she associates with her father’s personality. “He cared about the people that were going to live there or stay there,” she says.

Unlike the ground-hugging Lautner retreat, the bright white, two-story Beat Hotel shouts its presence amidst the desert scrub on Miracle Hill. Reminded of the hotel in Tangiers where Burroughs wrote Naked Lunch, Lowe created an environment to inspire writing and intellectual conversation, with vintage typewriters not only in the eight midcentury-furnished guest rooms, but also poolside.

A friend and collaborator of the Beat Generation author and artist, Lowe amassed writings, artworks, photographs, and memorabilia befitting a museum. The reception room displays original paintings, including a collaborative work of Burroughs and Robert Raushenberg; glass cases with gunshot spray-paint cans; and a Burroughs adding machine (invented by the writer/artist’s grandfather). Burroughs’ hand-painted ties and a collaborative work with Lowe can be found in the library. There, guests may (with gloves) thumb through myriad books and original manuscripts — many signed — by and about Burroughs and the Beat Generation. Lowe even has books on flower arranging written by Burroughs’ mother for Coca-Cola and the last photograph of his friend, taken by him the day before his death in 1997. Lowe could have hoarded his treasures, but he would rather make them accessible for others to appreciate.

Accessibility also lies behind his decision to open the Lautner motel (he maintains the Desert Hot Springs Motel name because that is how architectural publications have referred to it). “His work was so radical he never received public commissions,” Lowe says. Thus, Lautner’s buildings were private residences experienced only through photographs. Now, motel guests — often architects — can experience the dramatic changes in lighting over a 24-hour period due to Lautner’s use of glass and form. “This is like an opera of light,” Lowe says.

Lowe first walked into the Lautner structure on the anniversary of Burroughs’ birthday: Feb. 5, 2000. “I was thinking about Burroughs and thought this would be the perfect place for a writer,” he says. More recently, when he was developing the Beat Hotel, a man digging a well there mentioned he had known Lautner. Lowe refers to these coincidences as the “interzone” — a term coined by Burroughs meaning where dream and reality come together.

The real connection between the two motels’ subjects is “both were uncompromising, radical artists very focused on their work,” Lowe says. “The concept is identifying an event. In [Lautner’s] case, that’s structural; in the Beat Hotel, it’s a cultural event.” He refers to both as high points in history.

“To me, it’s installation art, performance art; and I kind of like the idea you can come and relax, remove yourself from the humdrum world, and empty your mind and focus on something really important.”

Lowe plans another installation in September, when another 20th-century innovator — furniture designer Charles Hollis Jones — furnishes one of the Desert Hot Springs Motel rooms with transparent furniture that includes an acrylic bed frame lit from below. Hollis Jones, who worked with Lautner from 1968 to 1975, saw the motel for the first time in 2003. “He caused me to be in love with light all over again,” he says, “so the pieces I put in there have to be concentrated, and they have to float.”

Peter Moruzzi, an architectural historian and chair of Palm Springs Modern Committee, says unique examples of architecture need to be preserved because they are part of our cultural heritage. Lautner’s Desert Hot Springs project exemplifies the experimentation in materials and methods prevalent after World War II. Moruzzi particularly notes the roof form and the way Lautner balanced the indoor and outdoor spaces. “It’s really a work of art,” he says — and just as important as more traditionally accepted forms of creative expression.

“We wouldn’t have too much difficulty understanding why works of art like paintings and sculpture need to be preserved,” he says. “But the same is true of great architecture. It just happens to be large and sitting on a private piece of property.”

Steven Lowe Remembered: For more on the Beat Hotel and Desert Hot Springs Motel and to view photos, click here.