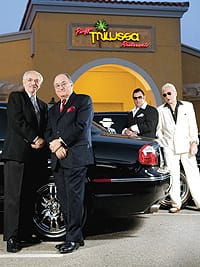 They stroll the streets in tailored pinstriped suits, hats, silk shirts and ties, and expensive European footwear. They wear glittering gold chains around their necks and flashy diamond rings that catch the moonlight and reflect it back as tiny stars. They frequent Italian restaurants, sitting in the back drinking wine and passing plates of pasta, listening to Pavarotti and Sinatra, talking about current affairs and the way things used to be.

On occasion, they are mistaken for the Mafia. “Maybe some people have seen too many movies,” says Ofer “O.G.” Gabriel, one of The Wise Guys. “A woman saw us together one day, … and she knelt in front of Ben [Cusumano] and kissed his hand. Another time, at a restaurant, a guy comes up to me and says, ‘I got something I want you to do for me.’ I say, ‘What do you mean?’ He says, ‘I got some people I want you to take care of.’ He was really serious.”

When The Wise Guys gather at Trilussa restaurant in Cathedral City, people notice. Their clothing, their attitude, and the way they carry themselves attract attention. They look like open casting for a Sopranos revival, maybe even the real Cosa Nostra. In reality, they are neither. They are legitimate businessmen, genuinely nice guys, law-abiding, tax-paying citizens.

Gabriel, The Wise Guys’ unofficial “Godfather,” won the Mr. Israel title in 1983, came to the United States, and parlayed his ultra-buff physique into a personal training empire. “I started at a small gym in Cathedral City called the Court Connection,” he says. “I was a floor trainer at night and a janitor in the morning. I had no car, no place to live. I would wake up in the morning, take my little red moped to the gym, and clean the place. I used to hide so pretty women would not see me vacuuming and wiping the machines. I was so embarrassed. There is a bottom; I started below the bottom.”

Now, Gabriel ranks among the Coachella Valley’s successful businessmen as founder and owner of OG Personal Fitness Studios. Though his clientele isn’t exclusively composed of the rich and famous, he is renowned for working with Arnold Schwarzenegger, Sylvester Stallone, Kirk Douglas, Frank Sinatra, and numerous other celebrities.

The most seemingly Mafia-esque member of The Wise Guys, R. Vincent Guccione, smokes a cigar lit with a lighter he got as a gift from Old Blue Eyes himself. His patois is straight-up Brooklyn-Italian, delivered machinegun fast. In the early days, he worked for his cousin Bob Guccione at Penthouse as the magazine’s wildcard problemsolver. “Something happened in Chicago, something happened in L.A., I would go and take care of it,” he says.

Eventually, Vince “Goochman” Guccione started his own publication, Orange Coast Magazine. “It’s a brutal business — 15 hours a day, seven days a week. Deadline, deadline, deadline. It never stops,” he says. “The only thing I could do to make myself feel better was cook. So at 38 years old, I sold the magazine, took a trip to Europe, and went to school. I learned the European kitchen discipline.” Upon returning to California, he worked as Sinatra’s private chef and later as Sidney Sheldon’s private chef. He now runs Culinary Arts catering company. “We have a new division called Elegant Private Dining. That’s where we take a restaurant into someone’s home. We bring everything, even the table, flatware, crystal, tuxedoed servers, hand towels. You name it, we bring it.”

Sam Pace (pronounced “Pachi”) owns Trilussa. “I came to Palm Springs 17 years ago,” he says. “I was a shoemaker. That’s how I started. I’ve been a shoemaker, a haberdasher, an innkeeper. … I was at Trilussa in Beverly Hills one day, and I was telling them how much I loved the place; and they said, ‘Well, why don’t you find a location?’ I found several, but I liked the one here in Cathedral City. Everybody thought I was nuts. ‘You’re crazy,’ they said. But now I’m a genius.”

While the other Wise Guys grapple for attention, 80-year-old Ben Cusumano quietly sips his wine. The retired Montebello police detective uses his hoarse voice sparingly. But when he does talk, the others stop to listen. There is something supremely sage in his manner, something beyond the wisdom that comes with age. “The most important thing about The Wise Guys is the relationship that we have with each other,” he says. “We’re talking to each other almost every day, checking on each other, seeing how we’re doing. We enjoy being with each other.”

It’s a simple statement, and one that sparks conversation. “These men are like family,” Guccione says. “I have people I’ve known for 30 years. I’m not anywhere near as close to them as I am to these guys.”

“No, no, no,” Gabriel intervenes. “I’m Jewish full-blooded. I’m not becoming Italian. Definitely not.”

“The real wise guys, the gangsters, they stole our identity,” Guccione says. “We’re not copying them; it’s the reverse. We were definitely here first. When those guys came over, they were bums. They didn’t dress good, they robbed, they were bad people. Once they got a little bit of money, they dressed better. They copied what was fashionable with us and with some of the celebrities, so naturally there’s a resemblance. But we don’t fool around with anybody that’s not straight. We’ve got too much to lose.”

“The way I see America is the way it is in the movies from the 1940s and ’50s,” Gabriel says. “You see the Cary Grants and the Gregory Pecks, all of them dressed up. Men looked good. That class, that elegance, what we try to do is bring it back, bring it to life. We’re taking Palm Springs back to the heyday when people would dress up and go out to dinner, listen to nice music, eat some great food, enjoy wonderful conversation, and look elegant.”

“What is peculiar about this whole thing,” Guccione says, “is none of this was done on purpose. We didn’t wake up one morning and say, ‘We should get a bunch of guys together.’ It was just one guy met another guy and we found that our traditions, our values, the way we look at life is the same. And we’re not the only ones. I’m a blogger. … I have about 50 pictures posted under Palm Springs Wise Guys. All of a sudden, we hear from these guys in Las Vegas. We established a rapport. O.G. went there, met them, and they’re gonna come out in a couple months. We have guys in Banning, too.”

“We like the old music, the old traditions, the old Rat Pack style,” Gabriel says. “That whole era — we really love it.”

“This is not an act,” Pace says. “This is who we are. These are the things we do every day. People see us and say, ‘I remember when it used to be like this.’ We’re here to show that it still can be.”