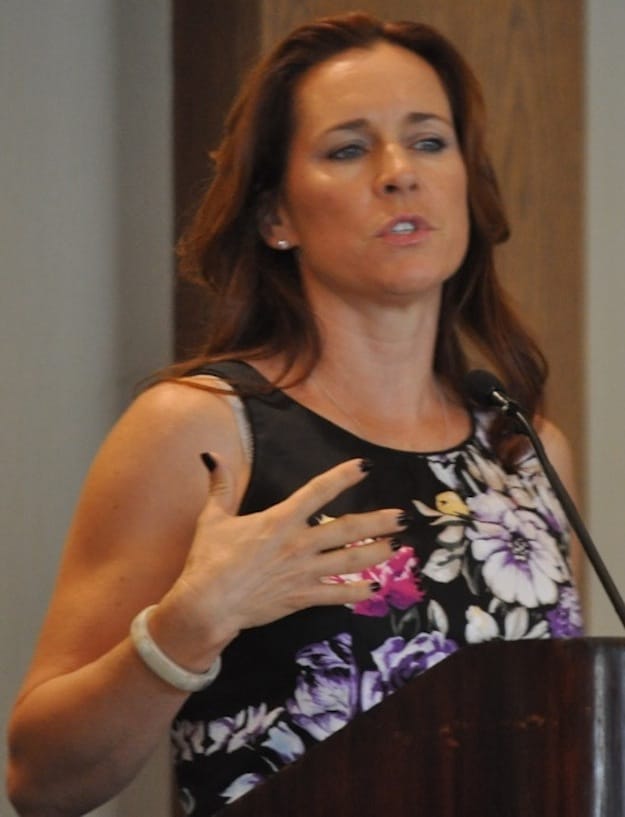 As she sat on that hill at age 13, the one she was forced to climb every day to and from school, Lisa Houston made the conscious decision to dream.

She was atop that hill for a reason. Despite the chaos that marked her family life, Houston was going to rise above it.

Houston has realized one of those dreams as CEO of FIND Food Bank in Indio, where she first started as a volunteer in 2009. She became its CEO during the economic downturn, using her experience as a certified financial planner and real estate developer to help the organization get back on its feet.

She shared her background and inspirations during the inaugural Women in Business awards program presented by Palm Springs Life on May 14 at the J.W. Marriott Desert Springs in Palm Desert. The program recognizes the business accomplishments of women in the Coachella Valley.

Houston was one of four women inducted into the Women in Business’ first class, winning the Business Leader Award. Betty Wolf, vice president of the foundation at Eisenhower Medical Center in Rancho Mirage, received the Corporate Leader Award, while Dr. Nicole Ortiz, co-founder of Live Well Clinic in La Quinta, was one of two winners of the Entrepreneur Award. The other was Kim Waltrip, vice chair of Kim & Jim Productions in Palm Springs. She was unable to attend the program due to a work conflict that took her to New York.

Houston posts her motto on her license plate, Dare to Dream, and lives it every day. “You have to have the vision of the highest level possible of yourself and those around you to really get where you want to go,” Houston said.

To make a dream a success story, Houston believes it boils down to the company you keep and the ability to hear your shortcomings.

“To me, surrounding yourself with others who have been successful or have the drive to be successful is good karma, good energy,” she said. “You need to be able to accept criticism. Encourage criticism. Get people to tell you think that you can do better. Sometimes we get stuck in a rut and do the same thing over and over and don’t even realize it.”

Wolf is also a strong proponent of building relationships. When she went through a difficult divorce in Chicago, those relationships proved critical to moving forward.

“It was kind of like getting kicked in the gut when that happened in Chicago, and you kind of grab yourself by your boot straps and move on,” she said. “What gets you through it is your family, friends and your network. Network can’t be understated.”

Wolf tapped into a psychiatrist at the University of Chicago where she worked in philanthropic development who helped her through the divorce’s rough spots. He helped open her eventual pathway to the desert. “He said he would put a good word for me at UCLA. I would have not have gotten that job without the network,” she said.

The value of teamwork has consequently never been lost on Wolf, who watched her foundation team at Eisenhower Medical Center manage the cancellation of an event due to weather with precise execution.

“The point here is victory has 1,000 champions. Nobody works in a vacuum,” Wolf said.

Ortiz initially looked at classmate Sonia Fung as a study buddy, someone to help her survive the grueling long days of medical school and process the inordinate amount of information.

What she found, instead, was her “soul sister”.

“We talked and shared our dreams,” Ortiz said. “Our dreams were the same. Our opportunity was presented. By our second year of medical school, we started having private business meetings and soon a business plan was born. Our classmates looked at us and wondered what the heck we were doing.”

“We truly took a leap of faith and decided there was no choice but success,” Ortiz said.

There have been challenges, but Ortiz said it’s important to remember your roots and mission.“What sets people apart are the ones who dig deep, have faith, make a plunge into it and you will either fall on your face and keep going or fall on your two feet and run really fast,” Ortiz said.