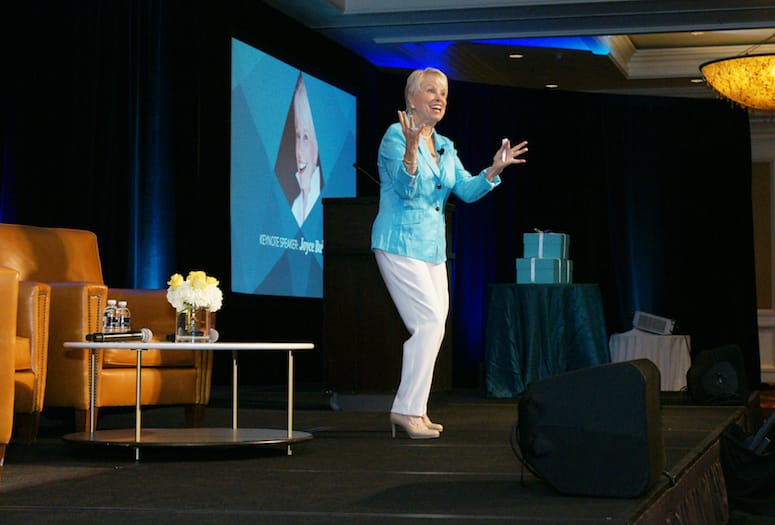 Actress Joyce Bulifant chats about some of the challenges she has faced and overcome during the Women Who Lead luncheon.
PHOTOGRAPHS BY GREGG FELSEN

Joyce Bulifant didn’t learn to read until she was 12. And when she did start to understand the words in front of her, they didn’t appear correctly due to what was later diagnosed as dyslexia.

As the actress best known for her role of Marie on The Mary Tyler Moore Show, Bulifant wanted to help children see past the stigma and raise public awareness after her youngest son, John, was also diagnosed. But she found conferences and talking heads boring. Her theatrical background made her think instead of a creating a musical that included dyslexic children and celebrities.

“People at the school looked at me like I had absolutely lost my mind,” Bulifant said during her keynote chat at Palm Springs Life’s Women Who Lead Luncheon at The Ritz-Carlton, Rancho Mirage.

It would not be the first or last time Bulifant would confront and successfully overcome opposition in her life. She wound up writing the script for the musical, brought in celebs like Danny Thomas, Julie Harris, and the Lennon Sisters, and produced a video that has been seen across the globe.

Bulifant spoke to the luncheon audience about how her experiences parallel those of the three women honored at the luncheon for their contributions to the Coachella Valley in both business and life: Kristi Hanson, architect at KHA Architects, for Business Leader; Oralia “Yaya” Ortiz of Culturas Music & Arts, for Non-Profit Leader, and Debra Hovel, a founder of Makerville, for Rising Star.

“I think a lot of women leaders in this room maybe have dreams, visions about what they can do, and it is amazing what we women can do,” Bulifant said. “Even when men look at us and say, ‘No, that’s impossible,’ that when we really go to work, right?”

Bulifant’s talk was followed by a panel discussion featuring Ortiz and Hovel (Hanson was out of town) with Palm Springs Life editor-in-chief Steven Biller that noted how both women in their respective endeavors may have come from different roots but their initiatives were both grounded in their passion for its success.

A portion of the luncheon’s proceeds went to the GirlFriend Factor, a valley organization that provides financial and emotional support to adult women who seek occupational training or higher education to bolster their careers.

Guests were able to peruse and shop at a pop-up by Grayse on El Paseo in Palm Desert by Kelly and Marie Gray, before enjoying a four-course lunch courtesy of The Ritz-Carlton featuring a Pacific salmon and watermelon salad.