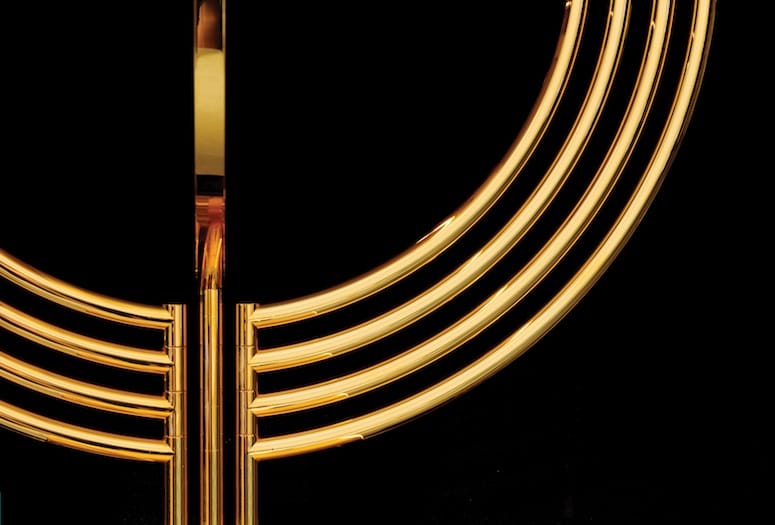 On a 1976 visit to her mother and stepfather’s home, Diane Deshong fell in love with their pool addition. On a waterside platform of pink blocks to match Sunnylands’ walls, nested stainless steel tubes rest on bends that allow them to rock with a passing breeze.

“Serious art collectors, Leonore and Walter Annenberg, were so excited when they got Square Waves,” Deshong says, “and that started a love of Agam.”

The kinetic sculpture by Israeli-born Yaacov Agam now sits in Sunnylands Center for In Motion: Agam at Sunnylands (through June 6, 2021). The late philanthropists/diplomats discovered Square Waves at the inaugural exhibition of Palm Springs Art (then Desert) Museum’s E. Stewart Williams building in January 1976.

“They purchased the pool piece right out of that show,” says Anne Rowe, director of collections and exhibitions at The Annenberg Foundation Trust at Sunnylands. “And they continued to acquire work from Agam.

“The exhibition includes three large oil-on-metal pieces that adorned patio walls,” she continues. “This is their world debut, because no one has seen them unless they were a guest at Sunnylands.” 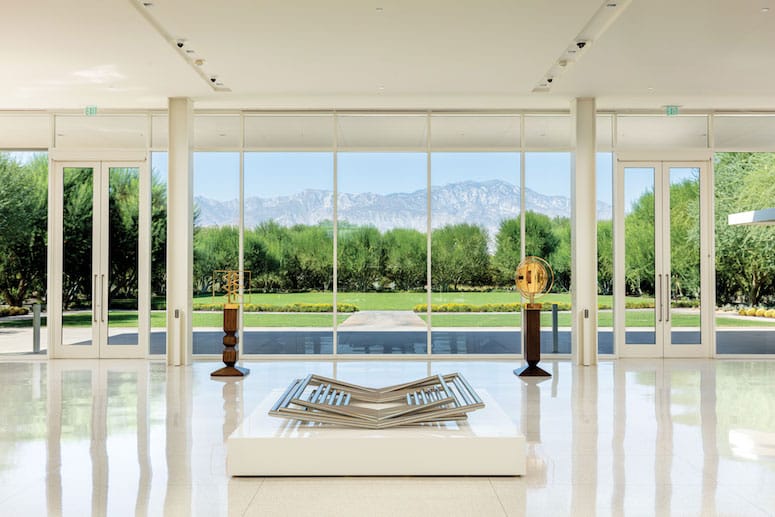 COURTESY ROYAL BC MUSEUM, VICTORIA. BRITISH COLUBIA, RBCM 14998; COURTESY ANNENBERG TRUST FOUNATION AT SUNNYLANDS AND THE HUNT FAMILY
The sculptures 3 X 6 Double Frame Interplay (1976), Square Waves (1975), and Reflecting Space (1978) are on display in the Great Room of Sunnylands Center and Gardens during the In Motion: Agam at Sunnylands exhibition.

Agam himself was a guest at the Rancho Mirage estate, and he and his wife and the Annenbergs were all guests of President Ronald Reagan at the 1981 state dinner for Israeli Prime Minister Menachem Begin. Agam also met with Walter Annenberg at the Waldorf Astoria in New York and in the media mogul’s office in Pennsylvania.

“He commissioned a big piece for his office in Philadelphia,” Agam recalls. “He was not only a client, but also a friend. We had an intimate relationship. We spent hours talking about everything — art, education, his idea of society, the way he wanted to contribute and help give people access to information.”

Agam’s own contribution to education — a program for cultivating visual cognition in children — earned him UNESCO’s Jan Amos Comenius Medal in 1996.

“The Agam Visual Education Method and his artistic credo spring from the same philosophical, spiritual, and almost scientific preoccupation,” his daughter, Orit Agam, explains. His mission, she asserts, has been to teach people “to see dynamically” — in a way that “grasps the full complexity of reality, beyond the static filter of verbal language.”

In 1980, New York City’s Guggenheim Museum celebrated its 49th anniversary with Agam: Beyond the Visible. Museum director Thomas Messer stated that the retrospective revealed reality to be “simultaneous, parallel, overlapping, harmonic, and contrapuntal.”

“My father studied music composition, including contrapuntal musical structure, in Zurich and often talks about his artworks as being visual melodies, each independent but harmoniously flowing in and out of one another,” Orit Agam divulges.

“The most constant thing in life is change,” proclaims the artist who thinks that static art falls short because it freezes time. “Something that represents life represents change,” Agam says. “We cannot provide for exactly what will happen. Months ago, you would not think about this sickness that now covers the world.”

In Motion curator Frank Lopez served as librarian and archivist for Palm Springs Art Museum for more than a decade and has held the same role at Sunnylands for 14 years. Knowing that both institutions possess rich collections of art by Agam, he says he realized “a great opportunity” to pursue a collaborative exhibition.

The Sunnylands collection includes two gold-plated brass sculptures with elements that can be rotated to alter their spatial composition. The Annenbergs also acquired paintings in which Agam fronted a background image with a vertical grille that can be manipulated to create divergent patterns.

Agam further mastered transformative images in mounting triangular pillars on a flat surface so that “walking by” the works reveals different paintings based on perspective. Such effects are particularly striking in the massive aluminum paintings the Annenbergs commissioned and installed on terrace walls: Sunnylands (1977), with a prominent use of a shade of pink to match the estate’s walls, and Situations (1978). 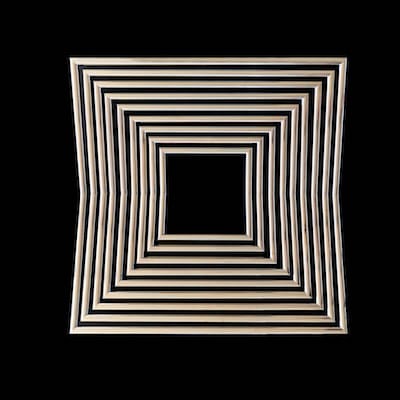 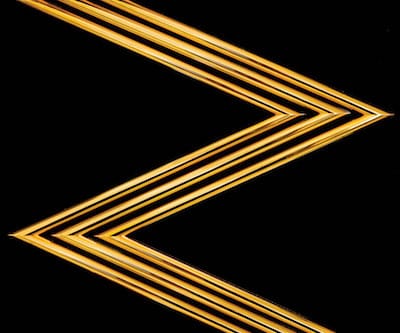 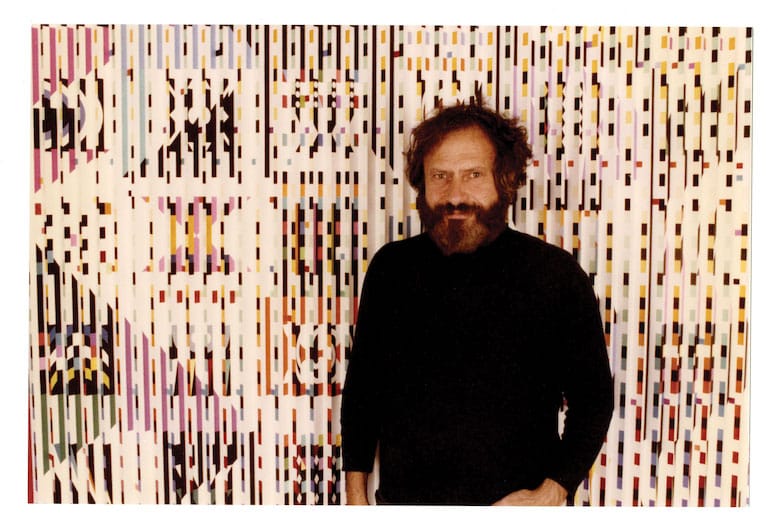 But not all of his kinetic art involves modifiable parts or shifting eyes. He takes a compositional approach in serigraph series that create polyphonies. For a suite titled +-x9 (Plus Minus Times Nine), Agam includes a frontispiece and color key that demonstrate how combinations of basic shapes and lines can “evolve.”

Studying art in Jerusalem, Zurich, and Paris (where he was befriended and influenced by famed surrealists), Agam gained recognition at the age of 25 in a 1953 solo exhibition at Paris’ Galerie Craven. 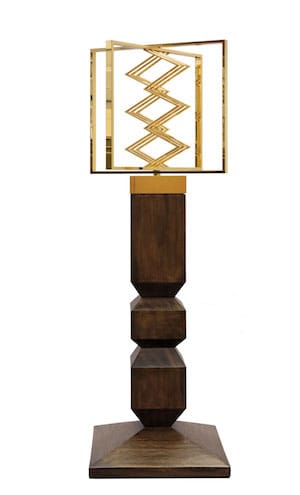 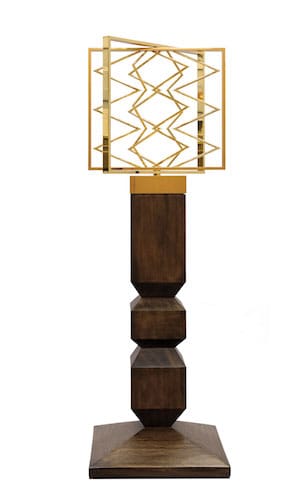 (Max Ernst bought one of his works from the show.) The 1955 Le Mouvement exhibition at Paris’ Galerie Denise René propelled him into a heightened public interest in kinetic art in the 1960s and 1970s. The Agam Museum of Art — opened in 2017 in his birthplace of Rishon LeZion, Israel — secures the legacy of the pioneer, still active at the age of 92.

Amassing 16 of his works, “The Annenbergs collected no other contemporary artist more than Agam,” Rowe notes.

“I wanted to put my hands on them, but I knew that wasn’t the right thing to do, and I didn’t want my kids to see me do it and think it was OK for them to do, too,” she admits. “But we did play with Waves when no one was watching. It was fun!” 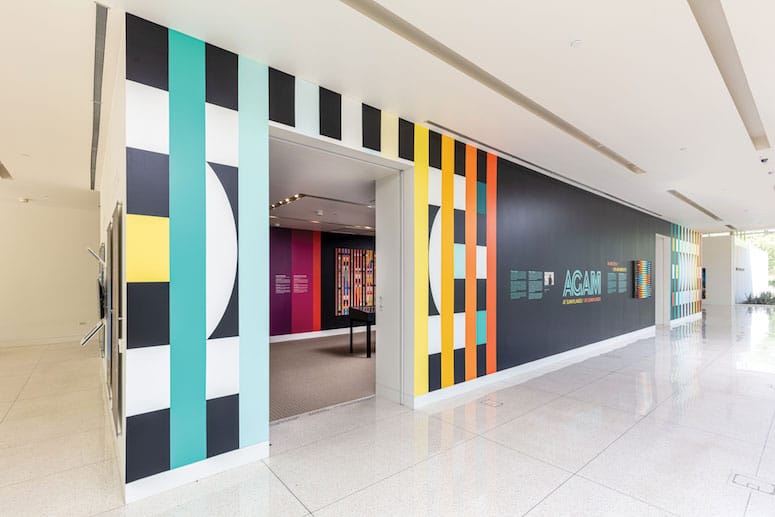 THE ANNENBERG FOUNDATION TRUST AT SUNNYLANDS. PHOTO BY MARK DAVIDSON. © 2020 ARTISTS RIGHTS SOCIETY (ARS), NEW YORK / ADAGP, PARIS
The entrance of the gallery for In Motion: Agam at Sunnylands. 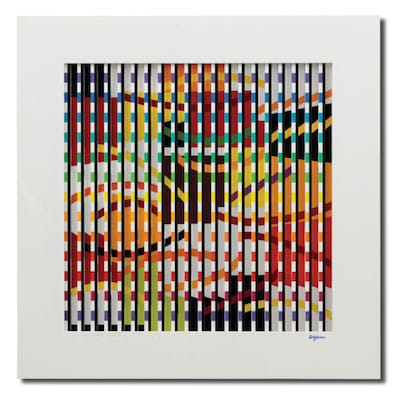 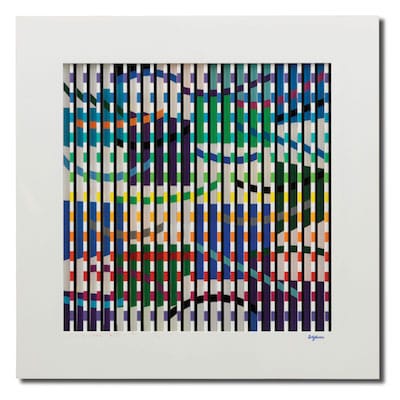 She now owns three Agam artworks, all of which she loaned for the exhibition. An enamel-on-mirror painting was a gift to the Annenbergs from Agam, signed to them and dated “Thanksgiving 1983.”

“They gave the mirror to [my husband and me] after we moved to our house in Beverly Hills, because they thought it would look fabulous over the fireplace, which it does,” Deshong says.

She and her husband subsequently purchased two Agamographs. One, titled Double Rainbow, appears as concentric circles when viewed at one angle and the U.S. flag from another.

“I am very interested in patriotic things, and so it was the perfect fit for us,” she declares.

Agam’s work also lifts her spirits. “When I am in a bad mood,” she says, “I change my walking habit and it changes my mood.”

• READ NEXT: Greater Palm Springs Offers a Variety of Art to Experience.