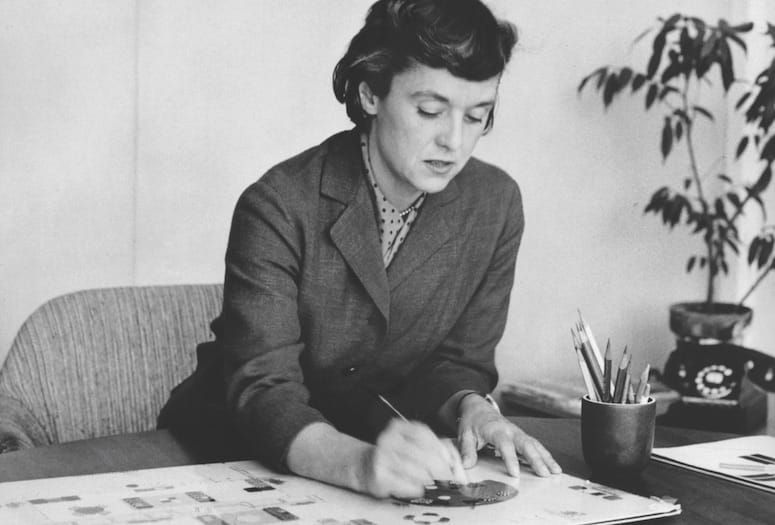 “The concept of modern things is constantly evolving,” says Benjamin Pardo, executive vice president and director of design for Knoll, Inc. “[Modernism] is a liberation of overall space in terms of planning and determining a lifestyle that is, in some ways, more modern. Modern is not only 1954. Modern is also today.”

For people whose knowledge of modern design in North America stops at Gustav Stickley, Knoll and its competitor, Herman Miller, are the two American companies mutually responsible for introducing modern design to the North American commercial and domestic markets in the 1930s. The two companies have since championed the work of designers such as Ludwig Mies van der Rohe, Charles Eames, Isamu Noguchi, Eero Saarinen, Hans Wegner, Marcel Breuer, George Nelson, and dozens of others.

Pardo transitioned from studying semiotics with the late Umberto Eco at the University of Bologna to the world of industrial design when he discovered he had a talent for thinking in three dimensions. He believes that modernism is much more than a visual revolution that grew out of the Bauhaus movement, which began in 1919. Pardo suggests that modernist designers “were using materials in a very different way, and they were moving people away from what they understood to be the status quo … rather than asking the question, ‘What is it?,’ they were asking the question, ‘How can I use it?’ If I had been sitting in my grandmother’s wing chair, and then all of a sudden I can sit in a womb chair, it’s actually a very different experience.”

The design director says that for Knoll, Palm Springs is one of the important “localities that you keep an eye on in terms of who’s doing what where. In the same way that people are paying top dollar for [architecturally significant] homes, the next question is what are the objects that people are purchasing. We’ve gone through our ‘Mies-ian’ cycle. We went through the Scandinavian, [and] we then rediscovered a series of American masters. I think we’re starting to see a lot of things come to auction from the late ’60s and early ’70s.” 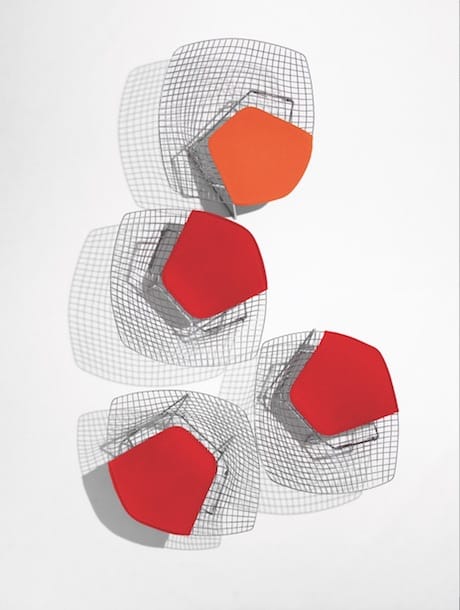 If one subscribes to the idea that modernism began with the German Werkbund movement founded in 1907, and continues with contemporary designer/architects including Frank Gehry or the Netherlands’ Rem Koolhaas, the modernist movement is more than 100 years old. Given the tens of thousands of objects created during this era, Pardo says that it’s important for Knoll to track the cycles of public taste of certain periods. “I refer to objects as belonging to high culture or low culture, and it’s all absolutely cyclical. Let’s use the example [of] the Saarinen pedestal table. When they were first introduced in 1956, they were the cat’s pajamas. If you go to a later period in 1969, 1971, you could go to any town and buy a knockoff of the product … for the equivalent of a very small amount of money. Then that product started to soar again in the ’80s, quieted in the ’90s, and now it’s the hottest thing on the face of the Earth. There’s always a high and low cultural moment associated with what an object is about. When something like Saarinen, which is very strong on organic form, is very, very hot, maybe Mies will be quieter, or when Mies is very, very important, then maybe [Harry] Bertoia will be quieter. Those cycles all take place, and it’s very generational.”

Another less obvious cycle is the sometimes mysterious evolution of an object from one intended market to another. Pardo cites Mies’ famous Barcelona chair as an example. “[It] is a 1929 idea. It was a throne for a king and a queen. That product was literally redesigned by Mies and Florence Knoll for commercial application. [Florence Knoll was co-founder with her husband, Hans Knoll, of Knoll Associates in 1946; she was the prolific design director of the company interior design unit until 1965.] It became the idea of every large U.S. and international corporation to have two of those [chairs] in their lobby to represent that they were a modern company. 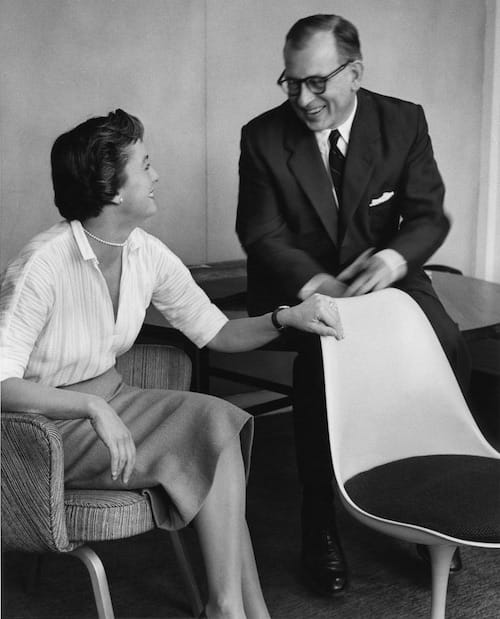 PHOTO COURTESY OF KNOLL, INC.
Florence Knoll discusses the model 151 Pedestal Chair with its creator, the great Finnish designer Eero Saarinen. Having known each other since childhood, the two designers enjoyed a productive working relationship. 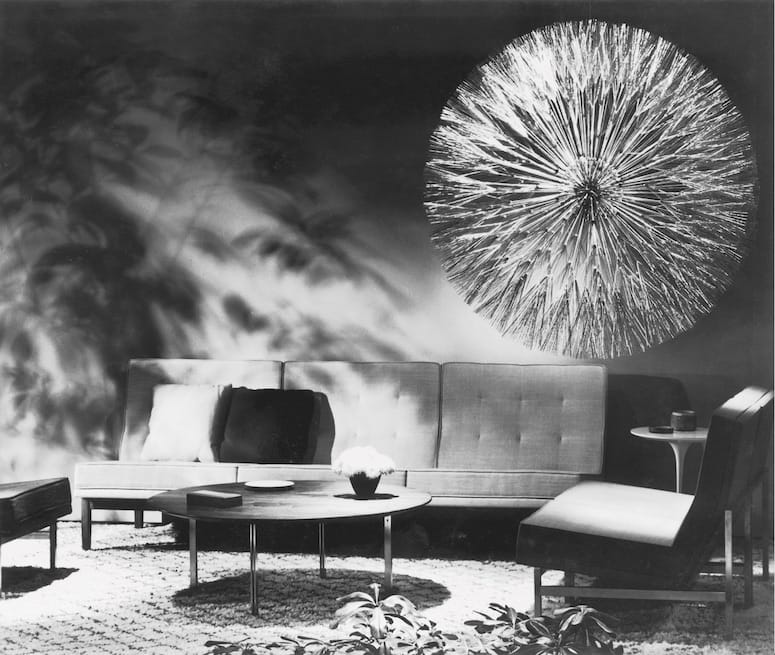 “Then what starts to happen is there’s an intelligentsia associated with people using [the chair] in their homes. Now, I’ve taken it from a corporate setting and, if I own this piece of furniture, I am a very savvy, current type of person. There are cultural shifts that take place in the way in which various objects are used, and the way in which the specifier, or user, chooses to manipulate them. That’s part of how a product maintains its vitality.”

Of course, when a “movement” like modernism is 100 years old, there must be some debate about what is truly modern, contemporary, and forward thinking, and what objects qualify as pre-modern or distinctly vintage. Such determinations, of course, are entirely subjective. Frank Gehry’s woven, wood laminate side chair might seem more cutting edge and light years from Charles Eames’ molded plywood recliner (and an interesting evolution of Eames’ thinking), but the Cross Check chair is more than 25 years old and Gehry first started working on the design in 1984.

Pardo says that Knoll’s work with “starchitects” is extremely valuable to the company even if not all the results are commercially successful. Harkening back to founder Hans Knoll’s obsession with introducing European modernism to America, the company continues to seek out architects and designers who continue to push and expand the broad concept of modernism. “Sometimes the intent is for them to be a mass-produced praise piece and sometimes the intent is really for them to be this iconic graphic object that only Knoll can do in a relationship with an architect,” he says.

One of the starchitects whom Pardo has found particularly gratifying to collaborate with is Rem Koolhaas. Knoll’s online catalog describes Koolhaas’s 04 Counter as “a monolithic stack of three horizontal beams, the user can rotate the top two beams and transform this wall-like unit into a series of shelves and cantilevered benches — a metamorphosis from a spatial partition to a communal gathering place.” Pardo loves it because of “the kinetic quality, the intellectual idea behind [it] … it’s sort of architecture and piazza all at the same time.” 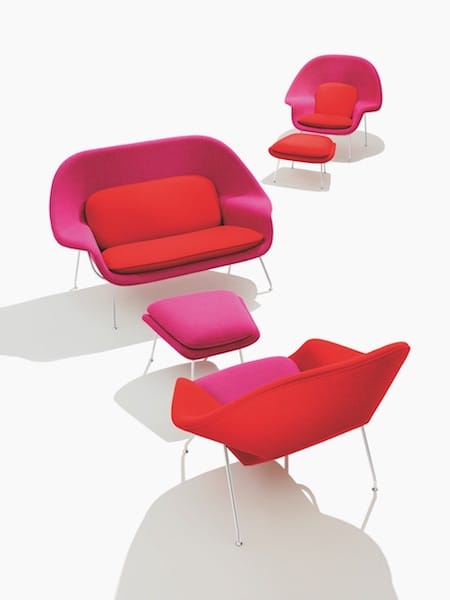 PHOTO BY ILAN RUBIN
Eero Saarinen’s Womb Chair was introduced in 1946 and is still in production.

A close study of Knoll’s catalog (and Brian Lutz’s excellent book, Knoll: A Modernist Universe) doesn’t draw distinctions between periods of modernism as much as it illustrates generational connections, intellectual throughlines that cannot be distinguished by five years or 50. In fact, it inspires a fantasy of combining Mies, Wegner, Breuer, and Gehry all in one room.

An anecdote is related to Pardo about a New York designer visiting Palm Springs who was unimpressed by a local homeowner’s newly decorated and remodeled midcentury home in Vista Las Palmas. “It looks like it was decorated out of the Knoll catalog,” he sniffed. After a perplexed pause, the homeowner said, “I did decorate it out of the Knoll catalog.”