tennis | Your Day on Court 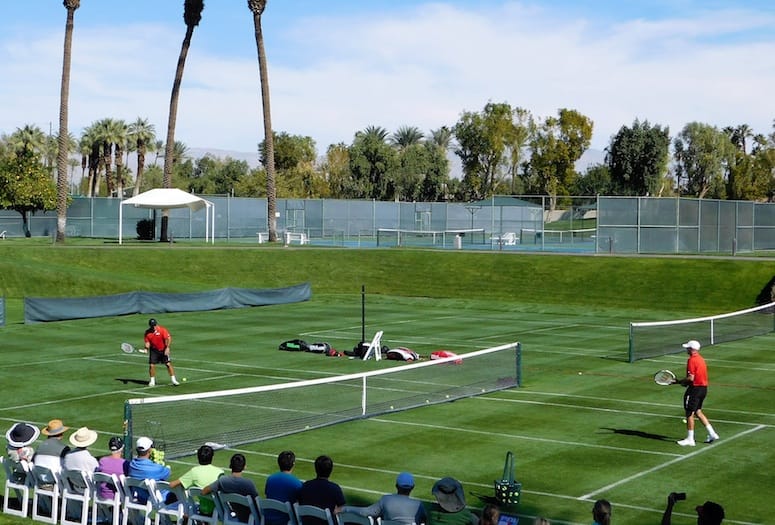 Although the professional grass court tennis season is relatively short, tennis enthusiasts in the Coachella Valley are fortunate to be able to touch the green, green grass of home year-round with some of the best lawn tennis venues in the nation.

Mission Hills Country Club holds the honor of being ranked the No. 1 tennis facility of the year in 2009 by the USTA, and head club pro Brian Jacobs said in 2016 that he's been told his Rancho Mirage location not only ranks among the best in the nation, it's garnered worldwide recognition. "We've had students here from England who have played The Queen's Club [with 27 outdoor and 10 indoor grass or grass-type courts]. When they saw these courts, they told us they were better than those over there," said Jacobs in 2016, whose club hosted the international Davis Cup competition against Chile in 2006. "That's huge for us. They've seen Wimbledon, too. It just backs up what we believe are the best in the world."

You, too, can play at Mission Hills (if you’re not a member, you pay a court fee and guest service fee). Other options are the JW Marriott Desert Springs Resort & Spa in Palm Desert and PGA West in La Quinta, with restrictions.

Jacobs, who coordinates play on 20 hard courts and four clay courts as well, says his 10 grass courts are at a premium and stay busy.

"The grounds crew is fantastic," he says. "The science behind it is pretty exact with the grass, the rolling periods and cycles. It's quite a luxury, but a lot of maintenance.

"The game is extremely popular. The bounce is different. It's easy on the eyes, easy on the joints, on the mind, and aesthetically pleasing." The grass courts were added to the JW Marriott in 1991.

Grass play is especially popular for doubles, and complements the majority of members at Mission Hills, whose average ages range from 60 to 80.

At the Marriott, resort guests are given first priority on the courts, but visitors are also welcome. Its tennis center offers a Grand Slam Round Robin clinic to try all three surfaces.

The facility was ranked No. 1 in instruction and programming by tennisresortsonline.com in 2013.

"We usually have about 16 out there [playing doubles] and we can take about 32 when it’s high season,” says a spokesperson. “We have one of the pros out there directing you. A lot of people want to try it out." Tennis courts are open to only PGA WEST residents and their guests.

Jim Leupold, Desert Springs' tennis director, adds that there is a constant call for his courts, which dressed a set for the HBO movie, 7 Days of Hell, filmed n 2015 with Andy Samberg.

"Most people either really like them … or it's a novelty," says Leupold, who noted the grass courts were added to the resort in 1991. "We also have the real tennis enthusiast or the ones who say that it was on their bucket list."

The grass game does take time to get used to, with its different bounces and surface feel, but it is easier on the feet, knees and back.

"I always tell people to give it 10 to 15 minutes first because it does take time,” notes Leupold. “But once you get used to it, it's a whole lot of fun."

According to PGA WEST, only a handful of world-class tennis and fitness resorts offer tennis players the opportunity of playing on all three surfaces. The sprawling La Quinta venue is one, but the courts are open only to PGA West residents and their guests.

Want to see if the grass is greener for your game?