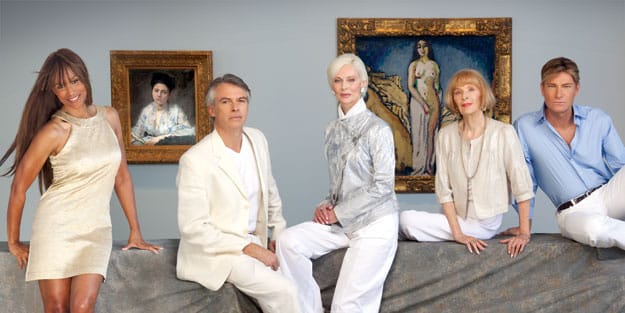 Ask attractive women or men in the Coachella Valley if they have ever been a model, and they might say yes. Palm Springs Life chatted with a half-dozen of our glamorous residents about their past adventures on and off the runway and glossy magazine pages.

Beverly Johnson of La Quinta claims the title of first woman of color to be a Vogue cover girl (August 1974), but it wasn’t all posing and walking for her. She led a spectacular social life.

“Oh, Halston … a beautiful man … the parties I went to in his townhouse! With Elizabeth Taylor, Steve Rubell [of Studio 54 fame], Rock Hudson. Once I said, ‘Oh, Ms. Taylor, what a beautiful ring you have.’ She took it off and threw it at me and said, ‘Put it on.’

“I had lots of gay friends. They opened up a new world to me of museums, the ballet, and opera.” Some of them, like Andy Warhol, Keith Haring, and Jean-Michel Basquiat insisted on giving her their art. She admits that, at the time, she didn’t really appreciate it. “I was like, ‘Campbell’s soup?’ I said, ‘OK, all right.’ And for some reason, I kept them, thank God.”

But the path to stardom could mean ruthless com-petition on the catwalk. As a rookie, a shocked Johnson found pins in her shoes. On the other hand, Naomi Sims welcomed her. “She was the big black model — not so much editorial, but runway — and she was just so nice to me, Johnson says.

Rosalee Calvert of Palm Desert remembers a harder life. Breadwinner for her sons, an actor husband, and a housekeeper, she worked nonstop during her double-decade model-ing career. A favorite of fashion photographer John Engstead, she says, “He saw me through three pregnancies. He’d call me up and say, ‘What’ve you got left, Rosie? Hands, feet, legs?’”

Though she made her name in Los Angeles in couture by Jean Louis and James Galanos (“She was stunning,” Galanos says), Calvert was an instant hit in New York. One of her first assignments was a Vogue post-deadline reshoot by renowned photographer Louise Dahl-Wolfe. It showed a patrician blonde in a leopard coat. Before long, her agent, the formidable Eileen Ford, could be heard fielding phone calls linking the newbie with two of the leading mannequins of the midcentury. “Well, I could give you Dovima, [Jean] Patchett, or Calvert.” Client: “Calvert?” Ford: “Page 52, current Vogue.” And then she’d hang up. “She loved to hang up on people,” Calvert recalls, chuckling.

“The most interesting and fun fashion shows ever were for [studio designer] Edith Head,” Calvert says. She modeled costumes for Carole Lombard, Lucille Ball, and Greta Garbo. “Lombard was sooo small,” she says, breathing inward and then adding, “John Engstead shot me in some of Marlene Dietrich’s costumes.” A close encounter with the icon herself followed.

“Marlene Dietrich was a good friend and client of Jean Louis.” She volunteered to help behind the scenes at a fashion show. Looking at Calvert, she said, “I’ll be your dresser, darling.” Calvert was nervous. She’d heard rumors, and worried that the diva wouldn’t know how to handle the frantic quick changes. But, Calvert notes, “She was excellent. She had everything unzipped and ready for me.” And Calvert walked away with the ultimate compliment: “You are so beautiful,” Dietrich said. “You look just like me.”

“Oh, Rosalee was a top model,” says Barbara Sinatra of Rancho Mirage, who did very well herself. “They said I had the figure of a high-fashion model and a face that was commercial.” Best known as the main model for designer Howard Greer, young Barbara Blakeley also worked with West Coast majors Richard (Mr.) Blackwell, Don Loper, Travilla, Irene, and Helen Rose.

“Helen Rose was so sweet, but her husband was … strange. He used to hide the food from the models. If the usually starving girls got there before the buyers checked in, they ate the buffet bare.”

Sinatra remembers a provocative en-counter while cruising to the Bahamas for a Good Housekeeping magazine shoot. The bevy of models noticed a yacht closely following their ocean liner. Upon docking at Nassau, a dashing young man came aboard — a fledgling senator from Massachusetts: John Fitzgerald Kennedy.

“He was charming, attractive, sexy, everything. He was great. He went back to New York with us. But he didn’t have any clothes. Everyone had to dress, black tie. So he couldn’t come down to dinner.” But aside from that …

“No, I’m not saying we had an affair,” Sinatra asserts. “We were friends.”

William Squire of Palm Springs maintains his model silhouette. At about 6 feet tall, his waist measures 32 inches. “I have the right structure for clothes,” he says. World-class designers have agreed. “Yves Saint Laurent called me his muse. People say I look like him.” (He does.) “We became great friends,” he says.

The designer used to say, “William, you make anything I do look good on the runway.” In Squire’s view, that’s a model’s job. “I thought, ‘I am a walking clothing rack. Clothes are the star.’” To sell the merchandise, he adds, “I had to go to the gym, eat healthy, and — it was hard — get enough sleep.”

Squire characterizes Gianni Versace: “He was every-thing they say he was and more … talented, joyful, angry. A classic Italian with the emotions. He’s backstage screaming, but you love him.” About Calvin Klein: “I think he had a dark secret. He hid his homosexuality for years.” On Giorgio Armani: “A true genius, a true gentleman. Kind, creative. There’s nothing like an Armani suit.” Acting the gamut, in the Versace mode, Squire, lips parted, wore eyeliner and exposed his chest hair. For Fila, he played macho sportif.

His heyday (the late ’80s to the mid-’90s) coincided with the era of supermodels, who boasted about not getting out of bed in the morning except for supercash. “I hate to say it, but they were spoiled,” Squire says. “In the same show, Linda [Evangelista] would get $40,000 and I would get $10,000.”

Before Brent Hartman became a model, he says, “The cherub look had been in: blond, blue-eyed, chubby cheeks.” In the early ’80s, his more traditional brunet visage took the spotlight.

As a University of Colorado student, he studied during modeling. “I could read textbooks while standing up for fittings,” he says. “I was the only one I knew enrolled in college. I guess [other models] thought beauty would last forever.”

On his second audition, menswear designer Alexander Julian chose Hartman from a group of 40. “This is easy,” Hartman thought. But the fashion show lightning changes boggled him. “They dressed you so fast. I remember going out on the runway and looking down to see if my zipper was zipped.”

“The most bizarre product I ever modeled was dishwasher soap,” he says about a TV spot. “In a jacket labeled Cascade, I had to stand while bubbles came up from the floor.” Once, made to run across a city street in traffic, he recalls, “I was afraid I was going to fall and take the knee out of this crazily expensive Krizia suit.” On another occasion, his photo companion turned out to be a hawk. “They said, “Keep it away from your eyes. It picksat shiny things.”

Recently, a photographer asked Hartman to pose for a nude study in the High Desert. They moved from cactus to rock until it was getting dark and cold. “I had no idea where I left my clothes,” he says. “In nothing but cowboy boots, I followed my footprints back to them.”

Heather (Priestley) MacDonald Greene of Rancho Mirage, who also worked in an executive position at a law firm, modeled apparel by Donna Karan, Calvin Klein, and Armani in magazines such as Vogue and Elle. But not every shoot was a glamorous experience. She recounts one photo shoot in an old diamond mining camp. “We flew into the Amazon near Angel Falls,” she says. “In the middle of the night, we heard a terrible scream. Someone was bitten by a vampire bat! … The next morning, I had to look gorgeous for a shoot in safari-looking clothes — with knee boots, thank God.”

None of our subjects really stayed with the game, except William Squire. Co-author of The Model’s Workbook, he teaches and lectures in the field. Brent Hartman retired from private banking to manage Phyllis Washington Antiques/Maison Felice on El Paseo. He lives in Indio by the polo grounds, riding his palomino and driving his Ferrari 400i. Beverly Johnson, heeding what Eileen Ford told her early on (“Ninety-nine percent of the models end up broke”), owns a beauty products company. Heather MacDonald Greene and her husband, Douglas, are philanthropists. Barbara Sinatra sponsors her eponymous Children’s Center and soon launches an autobiography, Lady Blue Eyes. As for Rosalee Calvert, she manages her apartments and paints watercolors and acrylics, some picturing chic 1950s beauties.