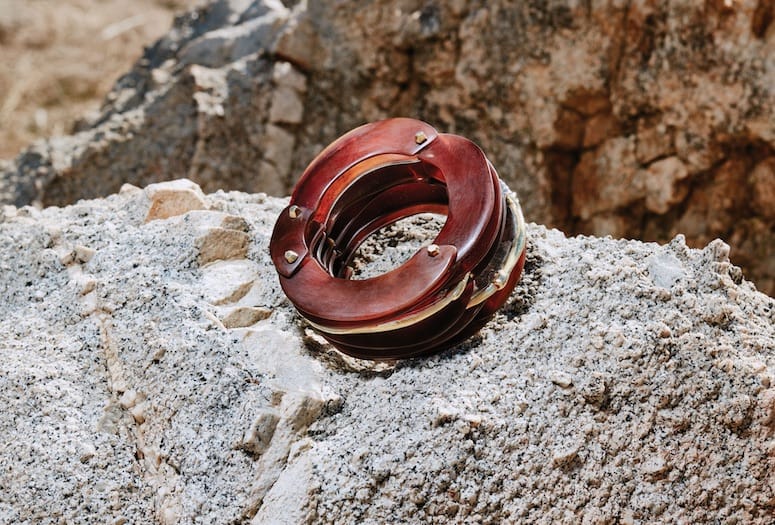 The Receive Your Light collection includes rings for men and women by Yves Kamioner.
PHOTOGRAPHS BY NATE ABBOTT

For generations, artists (Noah Purifoy), musicians (Gram Parsons), and writers (Edward Abbey) have hitched their identity to the High Desert, seeding the creative community that thrives today in Joshua Tree and sparsely populated places like Wonder Valley, Pioneertown, Flamingo Heights, and Landers. Long considered inhospitable, if not uninhabitable, this corner of the Mojave Desert now attracts artists, eccentrics, prospectors, and self-styled oddballs who spend unseemly sums for 5- to 10-acre ranch-style properties with nothing around them but a clear view of the raw desert and its arresting sunrises and sunsets over the wide-open horizon. They each have an “escape” story — urban life, failed relationships, you name it — and they’ve all come for the same basic amenities: space, light, and freedom. That’s the trifecta that seduced Yves Kamioner, a De Beers Diamonds International Award–winning jewelry designer.

Soon after the economy collapsed in 2008, and after working for three decades in New York and Los Angeles — including a 16-year stretch at Tiffany & Co. — he figured a change of environment and a new audience for his work were a safe bet. He bought a property in the Old Las Palmas neighborhood of Palm Springs, but before he could fully settle in, he visited the High Desert and felt a sense of freedom he had never known.

• READ NEXT: Inspiration at Hephaestus Jewelry in Palm Springs Comes From Travel and Dreams.

Kamioner wasted no time buying a house in Pioneertown, best known for the honky-tonk Pappy & Harriet’s, and starting a new life with a new partner. Although the relationship came to an end, his obsession for the otherworldly desert landscape only intensified. Today, he has a different partner, four restored and thoughtfully decorated vacation rental properties in Pioneertown, and a new series of jewelry embedded with the textures and ideas he draws from this “magical place.”

“The High Desert has no movement, no history, no critics,” Kamioner says. “It’s permission to play, explore, and be creative. You can find you again. That’s what the desert is all about.” At one of the properties, he installed a lifeguard chair to give guests a higher point of view. “I want to transfer that feeling, that emotion, into the jewelry.”

Kamioner’s new series, Receive Your Light, includes 18K gold necklaces, pendants, rings, bracelets, earrings, and pins. Each piece features a “crack” containing a few diamonds to symbolize the light and the energy of the desert and the inner strength of the individual. “It’s like everything in life: Things peel, things crack, things break. But underneath there’s hope,” he says, noting he uses other gemstones, including sapphires, to match the brilliant colors of the desert sky. 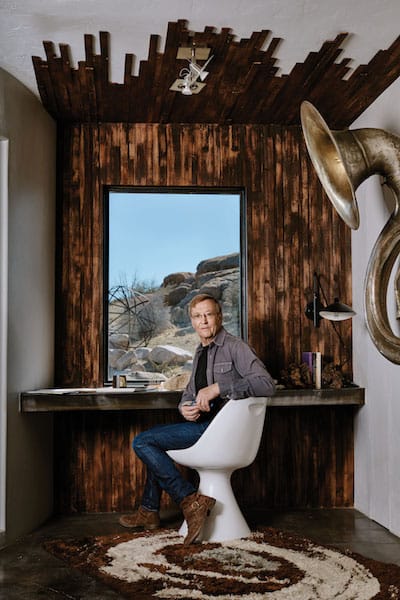 The High Desert gives Yves Kamioner space to explore and be creattive. 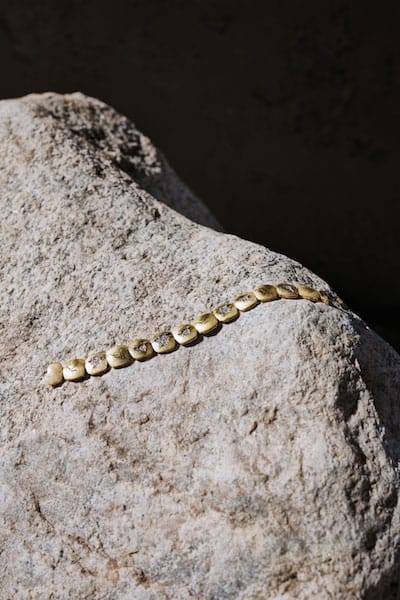 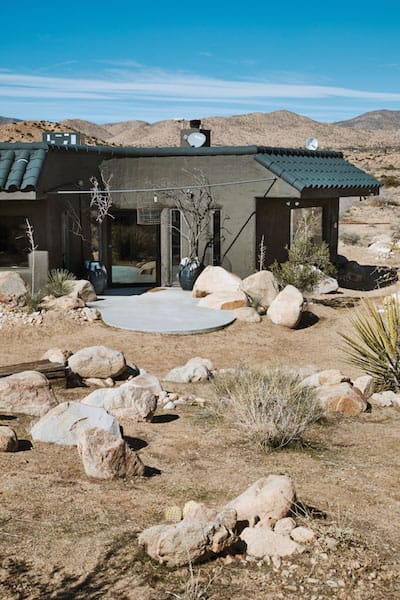 “The High Desert has no movement, no history, no critics,” Kamioner says. “It’s permission to play, explore, and be creative."

No two pieces are identical. Rather, they’re all organically shaped, lightweight (even dainty), and feature barely polished surfaces imprinted with textures from the boulders of nearby Pipes Canyon. “The more the pieces age, the more beautiful they become, like 18th century furniture,” he explains. “The more you touch it, the more the bottom part stays matte and the top part becomes shiny. It gets a patina, which I love.”

The technical construction bespeaks Kamioner’s training at Wolfers and Chaumet, the legendary jewelry houses in his native Belgium and France, respectively. He came to the United States in 1979 to study at the Gemological Institute of America in Santa Monica. (The GIA is now located in Carlsbad.)

In 1986, while en route to London, he was daydreaming about the De Beers Diamonds International Award. What would he design as an entry? “I was playing with my paper napkin and making shapes and forms,” he recalls. “Then, dinner came and I put it in my pocket, and that was it. I thought, ‘Oh my God. A diamond handkerchief.’ So I arrive in London, did the drawing in my hotel room, and sent it to De Beers. Four months later, in the middle of the night, I get a telephone call, and I had won.”

He had six months to construct the piece: a diamond-encrusted handkerchief brooch. “De Beers picked the diamonds, so they are absolutely perfect,” he says. “It’s all in platinum. It sits in the pocket perfectly, and it can go anywhere: on a blazer or a tuxedo. It’s absolutely beautiful.” 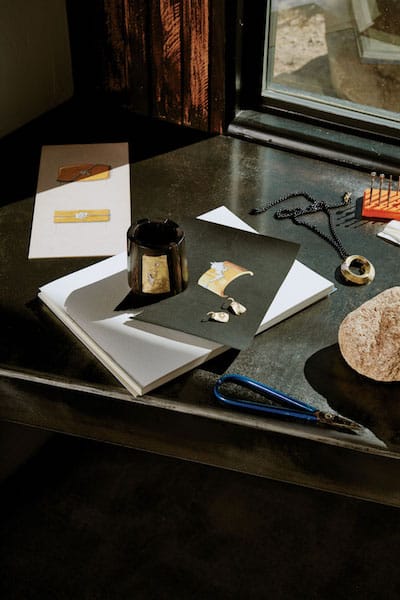 Bracelets, earrings, and pendants all feature “cracks” filled with diamonds and other gemstones. 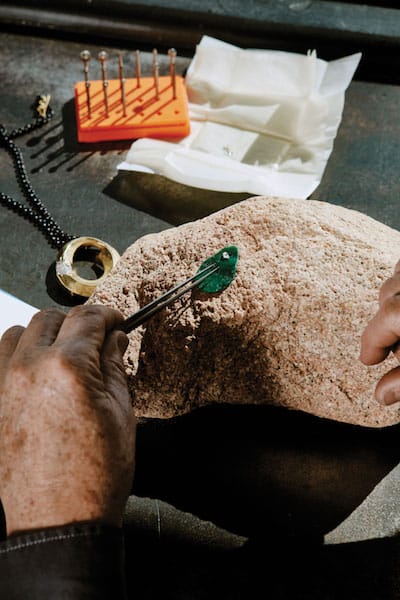 Armani designed the dress for its presentation in Milan, Italy, and De Beers toured the piece for a year before returning it to Kamioner, who wore it as recently as last December, at a holiday party.

During his career, Kamioner lived for 17 years in Los Angeles, then 23 years in New York before returning to the West Coast. While in both cities, he worked for Tiffany & Co. under design director emeritus John Loring. “He took me under his wing. He didn’t want me to move to New York because he said I would do whatever everybody else was doing. He said, ‘Stay in California. Do your crazy stuff, and bring it to me.’ Eventually, I moved to New York. It was like meeting the Pope. [Loring] was a great teacher. His eye was so sharp. He was not an easy man, but I’m so grateful for that education.”

Kamioner left his mark on the Tiffany brand, designing the Atlas Collection featuring the Roman numeral motif inspired by the Atlas clock on the façade of Tiffany’s flagship store on Fifth Avenue. 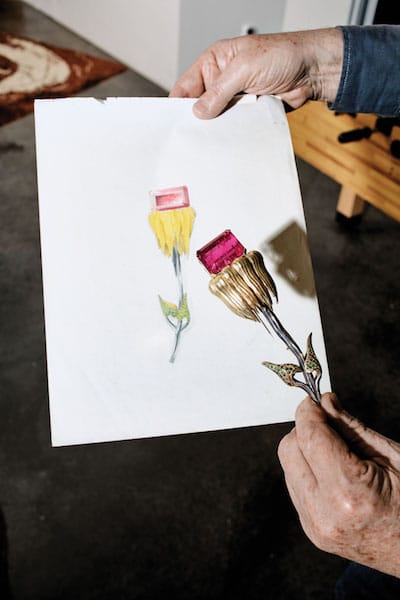 Every design begins with a drawing. 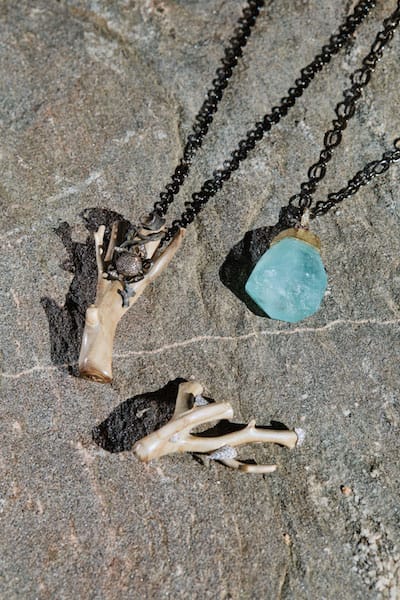 Kamioner fashioned a pin from a fossilized piece of coral.

After 16 years designing for the brand, Kamioner wanted his own name on his work and created lines for Saks Fifth Avenue and Neiman Marcus. However, he prefers the freedom and intimacy of working with private clients, whose stories inspire customized designs, such as a gold and platinum walking cane set with 2,200 diamonds and a scissor necklace with matching razorblade earrings (rubies “drip” from them like blood).

In the desert, Kamioner has found the ideal audience. “They’re always happy because they have made a decision to come and live a better life,” he says from his Rancho Mirage home, where he and partner Michael Baiamonte, also a jewelry designer, live and work. “They’re not on the board of the hospital in Chicago anymore. They are living who they really are, so there’s great potential for a new kind of jewelry and to redesign what they already have, which is my favorite thing because it comes with a story, and I’m a voyeur.”

Kamioner’s new line follows other series inspired by places he has visited, including Russia (Tatiana Collection) and Sequoia National Forest (Sequoia Collection), this time representing the free spirit of the High Desert like the artists, musicians, and writers before him.

Available at Flow Modern in Palm Springs and yveskamioner.com.