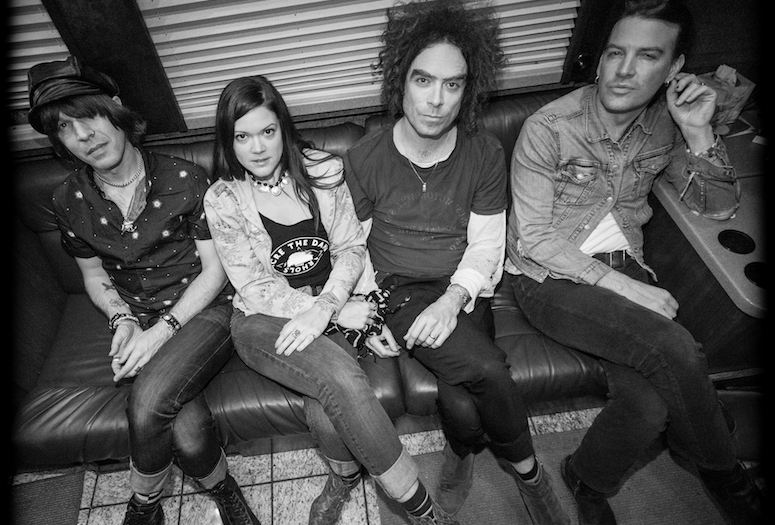 The hot desert sun beats down on bikini-clad skin at the Ace Hotel & Swim Club pool while music wafts through the air.

Near the pool, in the pool, or dreaming of the pool is where Zia McCabe, keyboardist of The Dandy Warhols, finds herself, whenever she is in Palm Springs with a rare moment to relax.

At night, when the stars twinkle over the Joshua Trees in Pioneertown, McCabe kicks back with fans and musician friends drinking libations out of mason jars at Pappy and Harriet’s waiting to go onstage.

She has the best of both desert worlds.

This weekend, McCabe is a musical triple threat to the desert communities. The Dandy Warhols headline The Desert Stars Festival, Oct. 3-4, at Pappy & Harriett’s, and her country band Brush Prairie plays afterwards. McCabe will also DJ on Oct. 5 for “Recovery Night” at the Ace Hotel & Swim Club.

McCabe took a moment from the tour schedule to chat with Palm Springs Life. How has the tour gone?
“We did the U.S., then Europe, Australia, and the U.S. again, so we are feeling a little spent. [Desert Stars Festival] is the last show of the tour and the last touring of the year, so I think we’re going to be pretty pumped.”

Have you played at Pappy & Harriet’s before?
“We’ve played this festival and it’s really fun. It’s a neat opportunity to go out to the desert for a weekend and hang out with desert bikers and all our friends from LA. [They] get to come out and get dusty.”

You drag them out to the desert, huh?
“Yeah, they get their ponchos on…it’s cute.”

Have you spent any time in Joshua Tree?
“I’ve come out there a few times, not as much as I would like to, but it’s nice. I’ve DJ’d at Pappy & Harriet’s when Peaches performed. That was really fun. When we do Desert Star, we all go to the Ace Hotel afterwards for “Recovery Night."

Tell me about your band, Brush Prairie?
“We are a country band that has a revolving door of members depending on what city we are in when we play. We play original songs and a few covers.”

Any LA musicians coming out to play with you?
“ I have my original guitar player, Kirk Delong, that I started Brush Prairie with [coming] from LA, so it’ll be fun to play with him again.”

Does Brush Prarie play with the Dandies often?
“No, it’s rare.”

Do you have any new material with the Dandies coming out?
“ We have a new song we have been playing this tour, “All The Girls of London.”

Is it a precursor to an album or EP?
“We may release it as a single, we haven’t decided yet. It’s currently being mixed. We’ve got other songs that are recorded, so we will decide if it goes out by itself or as an EP. [Playing] live, we just took it around the world and it’s been great. We just want to have it mixed to where we are happy with it.”

What about the desert attracts you to come back and play in this festival?
“We are from a pretty wet climate, so it’s just such a nice change of pace to be out in that arid desert and it’s just a psychedelic setting, whether you partake in that sort of thing or not, I think it’s just got that vibe.”

Any helpful tips for Desert Star festival attendees?
“Everyone needs to bring their night clothes! It’s going to be chilly in the evening there.”

Boots are good to keep the dust off your feet!
“And Scorpions from biting you. I’ve known people who have been bit while sitting on blankets. It can happen. No sandals!”