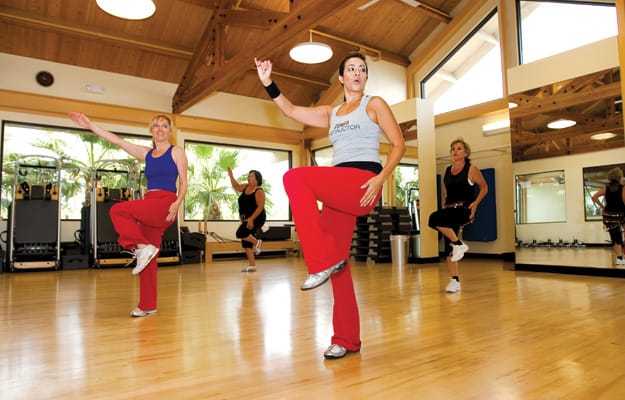 It’s prime time for a new form of exercise that satisfies both our cultural craving for catharsis and our deep-seated desire for saucy self-expression. In a true necessity-is-the-mother-of-invention moment, that revolution took root when Colombian fitness instructor “Beto” Perez stepped into an aerobics class having forgotten his music. Thinking quickly, he grabbed some of his own tapes from his car, improvised a new routine, and the rest is hip-shaking history. Now, with more than 12,000 certified instructors from Indio to Italy, Zumba stands poised to become one of the fastest-growing international exercise movements of the decade.

By bringing together nightclub nuance with salsa-inspired steps, Zumba cloaks the cardio in a layer of pure enjoyment. It combines Latin rhythm, merengue steps, and hip slaps into a fitness center dance party.

I tried it myself for the first time at Mission Hills Country Club in Rancho Mirage. The class began with a series of warm-ups — grapevine steps, side-to-side sashays — that are old hat to anyone who’s ever laced up a pair of Reeboks. But that’s where similarities shatter.

As the Latin beat of Zumba-patented songs intensifies, instructor Patty Reyes leads students through a series of merengue moves, salsa steps, and cumbia-inspired hip rolls that keep their attention on the cadence, not the clock.

“Don’t worry. You don’t have to be a dancer to do Zumba,” she assures me after I stumble through my first couple of songs. “Keep going and the moves will come naturally … I’ll give you tips as we go along. Just go with the flow.”

The routines pack a one-two punch that combines interval-training segments with fast and slow rhythms, while hand weights tone and sculpt. Surprising additions, like a series of belly dance-inspired wiggles, loosen the hip flexors and release rigidity from days spent sitting at a desk or driving around town.

While it may take a song or two to get used to, the fact that instructors refrain from calling out step-by-step instructions (asking students instead to learn by observation and repetition) opens up a secondary benefit: mental fitness strengthened by having to pick up, combine, and repeat steps through observation. I can attest that while this may be easier said than done, the result yields rock-solid confidence. On the first pass through a routine, my eyes focus on the rumba step; on the second pass, I notice that the right hand goes to the belly and the left raises at a right angle. By the third pass, I am able to combine the two with a saucy flick of the hip that identifies me — if only in my own mind — as one hot ticket.

At about the 30-minute mark, it dawns on me that the skill set called for is completely different from any of the rote aerobic baggage I had brought with me. Zumba requires relaxation versus physicality, a flowing spirit versus pinpoint moves, permission to laugh instead of instant perfection.

And so for the next 60 minutes, I shake, shimmy, and rumba my preconditioning right out the door by way of a series of wiggles, jiggles, slaps, and serpentine twists that promise if not to transform me from fumbling to fluid at least to provide a challenge miles from Dullsville.

On the way home, I daydream about what I will wear to my next class. The women to my left, both fun loving and over 50, had tied on bell-encrusted belly-dancing sashes (not a traditional Zumba accessory, but totally in keeping with Zumba’s anything-goes spirit) over black stretch pants and tank tops. Rumor had it that Reyes was hoping to splurge on a pair of knee-high dance boots. And while I’m not quite ready for a pair of hot pink Sizzle Shorts from Zumba’s online store, I might be talked into one of the acid-green “Join the Party” tanks. After all, if this is a dance revolution, why not sizzle all the way to the last note.

To experience Zumba, visit www.zumba.com and click “Find a Class.”