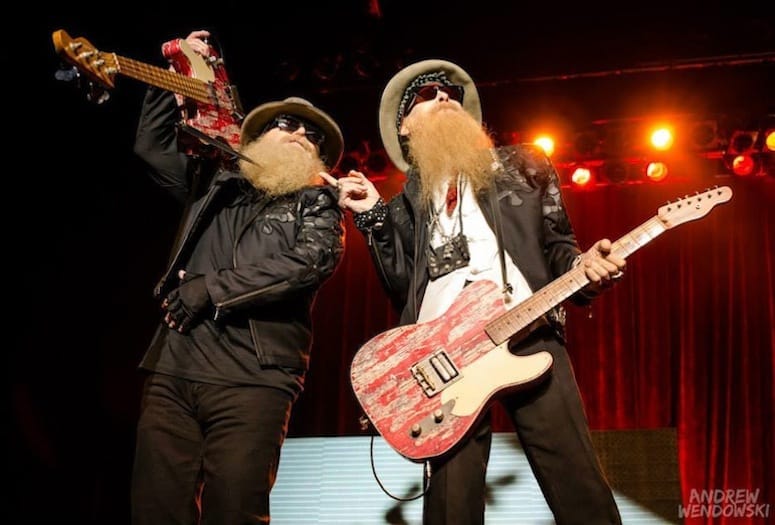 ZZ Top guitarist and vocalist Billy F Gibbons (pictured below) may be the Lone Star State-proud leader of one of the most famous and most successful little ol’ rock bands from Texas, but he’s also planted some deep, deep roots in Palm Springs — and he loves coming back to the area every chance he gets.

Here, ZZ’s head hombre tells us why Stagecoach remains a vibrant festival, what the best car to drive around town is, and tallies his favorite Palm Springs area haunts. Give us all your local lovin’, Billy. Why do you think Stagecoach remains an important festival?
"Stagecoach is nominally a 'country music' festival, however, it’s much more than that now. As I’m sure you’re aware, country and blues were the forebears of rock ’n’ roll, so this is, perhaps, some musical naval gazing — in essence, it goes back to a primary source. Country music has as much rock in it these days as rock has country and, of course, at the root of it all is the blues. There would be scant little without that, so our motto has long been, 'You can’t lose with the blues.'”

Who else are you excited to see on the bill this year?
"We’re looking forward to keeping company with Merle Haggard, as well as our good friends George Thorogood, Eric Burdon, and the Ben Miller Band, who have been out on our own tour dates quite a few times. Should be big fun."

You’ve written about your own special relationship with the desert over the course of your long musical life in songs like “Sure Got Cold After the Rain Fell” [from 1972’s Rio Grande Mud] and “Asleep in the Desert” [from 1976’s Tejas]. And, of course, there’s that caught-red-handed cover shot you guys did for El Loco [1981]. Is there one particular desert story you could share?
"Our song 'Master of Sparks' [from 1973’s Tres Hombres] chronicles a wild ride in a spherical cage that was welded together to be dragged across the desert behind a pickup. While seated in that crazy cage, you’re treated to a pyrotechnical display caused by the friction of the steel ball hitting rocks on the desert floor. It’s no secret ZZ2 has steadily kept a fondness for desert experiences, by working cactus, coyotes, and a few hot chili peppers into our sound — and it always just feels right."

You’re sure right about that. You’ve been drawn to Southern California culture since the late '60s, haven’t you?
"We were in Southern California before ZZ Top came to be, yes, so there are early memories aplenty. We fell for the great music scene on the Sunset Strip. Some really great bands came through there, including some outland regional acts like the 13th Floor Elevators and Moving Sidewalks [the band Billy was in prior to forming ZZ Top]. We came out during the early ZZ days and played at the Whisky A Go Go. It was one of the national showcase rooms on the scene, and it had an impact on us for sure. We shared bills with The Doors. We knew those guys and some of the other L.A.-based players quite well. A very influential exchange was going down all over town."

Tell us about DRIVEN, the art/car-show event you hosted at the Stephen Archdeacon Gallery back in February.
"DRIVEN highlighted the automotive-inspired work of Palm Springs artist Eric Nash, whose “car noir” paintings and drawings take their inspiration right from the road. The idea was, in essence, “found” automotive art and design. The opening reception, curated by our friends at FeralCars.com, also found an impressive assortment of notable rides on the sidewalk and the street, running the gamut from Pontiac Trans Ams to convertible Chrysler K-cars."

Any suggestions for what visitors should get out and see while they’re in the area for Stagecoach?
"The sights and dining spots are long and wide in and around PS. We always dig the downtown Palm Canyon stroll on a Thursday night when the weekly street fair is up and running. It’s really a big street party, irrespective of what you might take home or consume. Stopping at the outlet mall in Cabazon is a ritual, followed by the cuisine at Crazy Coyote Tacos and a pilgrimage to the café at Shields Date Garden in Indio, right near where the Stagecoach festival goes down. They are always on our itinerary. If you’re interested in exploring the high desert up the Joshua Tree way, we suggest a 'sound bath' at Integratron in Landers and a visit to Pappy & Harriet’s in Pioneertown, and remember to check out the late Noah Purifoy’s mind-blowing art installation in Joshua Tree. The area is about much, much more than golf and laying out in the sun."