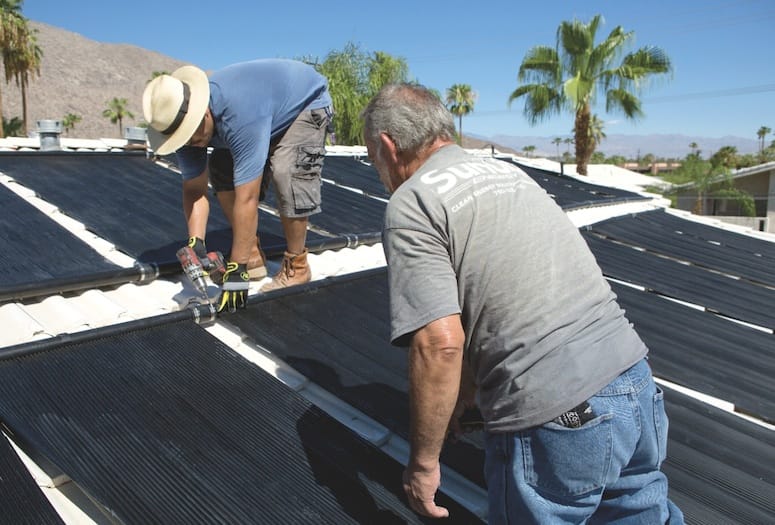 Sun Up Solar Systems has hired almost 20 employees  since moving into the Coachella Valley iHub.
Photo by Ethan Kaminksy

The ultimate measure of the Coachella Valley iHub’s success will be the number of jobs it creates for the local workforce. Earlier this year, the iHub companies reached their first 100 employees hired — more than two years ahead of schedule.

In 2014, Inland Empire economist Dr. John E. Husing projected that the iHub would create 105 new jobs by 2017. According to Husing’s projections, the iHub will create more than 3,500 direct jobs across 81 surviving startups during the next 20 years (and potentially faster if the pace of 2014 continues).

The iHub team mentors businesses that create higher-skill, higher-wage jobs in an economy dominated by low-wage industries. The program does not fund startups or pay salaries to entrepreneurs. Rather, companies accepted into the program receive workspace, basic office resources, and access to management consulting resources.

“The research and development we’ve been able to do through the iHub has really been a breakthrough for us,” says CEO Rick Rothman of SunUp Solar Systems, an innovator in solar hot water and pool heating. In addition to changing the company’s emphasis from contracting to manufacturing, “We were encouraged to get financing for our customers. Now they only come up with 40 percent of the cost, our systems pay for themselves in two to two and a half years, and after that, customers have free hot water.”

By the end of 2015, SunUp will have created 20 full-time jobs since joining the iHub. Rothman projects he will need even more workers to support the growth and install the systems.

Through SunUp’s apprenticeship program, workers receive streamlined training that results in skilled, consistently trained laborers, technicians, and crew chiefs who possess the knowledge of electricians, plumbers, and roofers all in one.

“Our goal is not to be the biggest company,” Rothman says. “It’s to develop a scalable business network of dealers so we can expand as a manufacturing and training facility.”
In addition to direct job creation, by 2036 the iHub program forecasts the creation of an additional 1,500 indirect jobs, with $2 billion in payroll and more than $7 billion in sales.

“The iHub is interested in entrepreneurs who might not otherwise find their path into realizing their ideas,” says Joe Wallace, CVEP interim CEO and managing director of the iHub. “We’ve done very well in attracting funds to the startups with more than six million investor dollars to date being deployed into equity positions in iHub companies. None of it has come from an angel fund or a venture capitalist. It has come from individual people.”