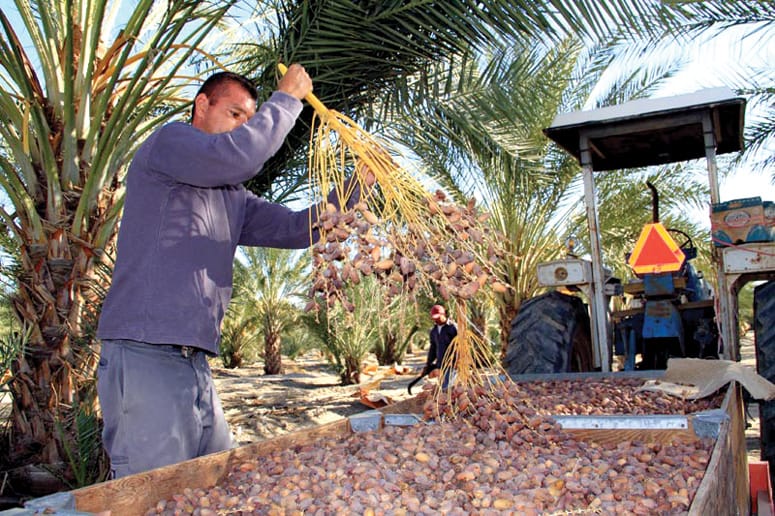 With a 300-day growing season, abundant water, easy access to markets, and sophisticated conservation and farming techniques, the Coachella Valley is one of the world’s most productive agricultural areas. Every acre averages a gross annual value of $8,000. Cash crops, from dates to hay, bring local farmers more than $500 million in annual revenue and account for almost half of Riverside County’s payroll.

Until the Coachella Canal was built in 1949, valley agriculture was an up-and-down venture, with dry years depleting the aquifer and tapping out artesian wells. The canal brought water from the Colorado River and allowed farmers to plant and harvest predictably. Today, the Colorado River delivers about 330,000 acre-feet of irrigation water to farms each year, with more water coming from private wells.

When the Coachella Valley Water District joined the California State Water Project in the 1960s, the area gained entitlement to imported water totaling 500,000 acre-feet, annually. But a growing urban population and increased demand throughout Southern California exerts pressure to reduce that allotment.

The Coachella Valley Water Management Plan is a response to that pressure, serving as a regional blueprint to greatly reduce total water demand. Today, more than 60 percent of the area’s farms use some type of micro irrigation, salinity control is becoming more sophisticated, and the area is on track to cut agricultural water use by 7 percent in 2015.

Farming tilapia in the Coachella Valley since 1993, Aqua Farming Tech Inc. is the leader in the farmed-fish industry, and founder Rocky French has become known for a long line of firsts: first with more than 60 tanks, first to use a mechanical aerator to improve water oxygenation, first to recycle its water, and first to generate a significant percentage of its power from solar. Now the company is partnering with Los Angeles-based OriginOil to establish a permanent technology showcase for a high-speed, chemical-free method of cleaning water in the tanks. “We’re so excited about this,” French says. “The technology will strip the ammonia from the water and remove the algae. We will then pelletize the algae and feed it to the fish. It’s a beautiful cycle.”

The end goal is to reduce feed and electricity costs, while also dramatically improving the nutritional value and taste of farmed fish.

Students can also gain hands-on skills and earn a certificate of achievement in landscape and irrigation, pest management, turfgrass management, and natural resources.

In 2010, the Coachella Valley’s agricultural production broke out of a five-year trading range of roughly $500 million to reach a record $533.8 million, up $49 million, or 9.2 percent, from 2010. In 2011, it reached its second-highest level at $526.3 million. Major importers of Coachella Valley crops include Japan, China, and Mexico.